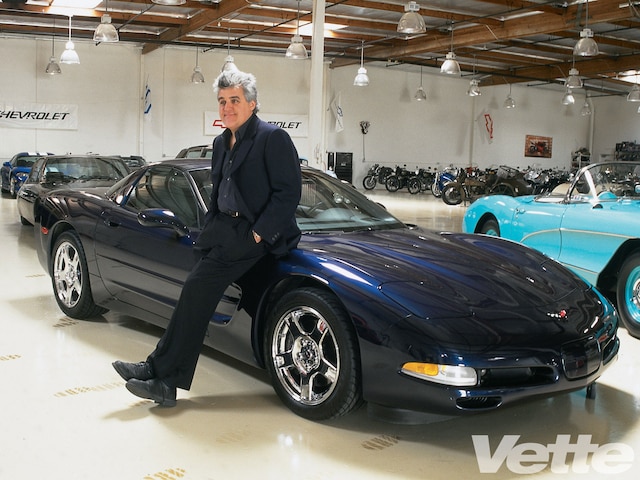 Entertainment and sports superstars have long been known for owning fast and flashy cars. In the days of Clark Gable and Gary Cooper, Duesenbergs were the cars of the stars. Generations pass, manufacturers and models of cars come and go, and tastes change. Some contemporary celebrities are hardcore car guys: comedian Tim Allen builds street rods and co-owns a race team. Retired home run king Reggie Jackson has amassed an impressive collection of mostly Chevrolet musclecars. Then there's Tonight Show host Jay Leno, probably the most fanatical car guy of the bunch.

There are several factors that set Jay and his collection of toys apart. His taste is, to put it mildly, eclectic, with roughly 60 vintage motorcycles and 60 cars, including a half-dozen Duesenbergs, several Bugattis, a bevy of antique steam-powered automobiles, a few '50s- and '60s-era muscle machines, a real 427 Cobra, three Lamborghinis, and more. Unlike most celebrities, Leno takes great delight in working on his cars alongside any of his four full-time employees at his LA area shop, doing anything from pulling and rebuilding a '30s-vintage Bentley straight-eight to overhauling a Stanley Steamer. And he believes that cars, no matter how old, rare, or valuable, are meant to be driven-regularly-and drive 'em he does.

Thus it comes as something of a shock that an admitted lifelong nut for any sort of motorized vehicle has never-until recently-owned a single example of America's Sports Car. Not long ago, however, Jay made up for the omission when he acquired a Navy Blue Metallic '99 Corvette coupe with a Light Gray interior and six-speed transmission. And not much time passed before Leno got the itch to add a little extra spice to his coupe. Nothing drastic, mind you, but some subtle touches to "Leno-ize" his blue beauty, the sorts of things many other C5 owners do. A drawback of being a well-known celebrity is the lack of privacy, and for someone with as recognizable a mug as Jay's, it meant he needed to deal with a company that's accustomed to working with and respecting the confidentiality of famous persons. This need led him to make arrangements with Corvette Mike's California store for the tweaks to be performed. And with Jay's blessing, Corvette Mike invited VETTE Magazine to be involved from start to finish-and then some.

The Tonight Show host keeps his collection of cars, bikes, and a couple of wildly unique antique trucks (like a two-cylinder, 1916 Autocar open-cab/open-bed coal-hauler) in a pair of adjoining industrial buildings near a large airport, just a few miles from the NBC studios where his show is taped. We got to spend some time talking cars with Jay when his C5 was returned, definitely an entertaining way to spend part of a Saturday. It was like a one-hour, impromptu monologue and, fortunately, we had a tape recorder going so we could retrieve some of what he had to say about his new Corvette, and cars in general:

What finally inspired him to get a Vette? "Chevy asked me to drive the Pace Car, a Monte Carlo, at Indianapolis. I got to drive a lot of their cars, and tour the Corvette factory. I was real impressed by all the engineers. I said to myself, 'I gotta get one.' A lot of my friends have had 'em, I've borrowed a few. When I was working in the car business I always wanted one, never could afford one. This is my very first, brand-new Corvette."

Working in the car biz? "When I was a kid in Andover (Massachusetts), I worked at a Ford dealership and was in charge of odometer recalibrations." What is that? "Exactly what it sounds like." What do think of the Corvette? "I'm real impressed with the build quality. I've driven a lot of European stuff; actually the build quality of this is better. It's like the Harley Davidson story, if you make it as good or better, Americans will buy it-they wanna buy American. A few years ago, everyone bought Japanese bikes, nobody bought Harleys; now the Harleys are built great, they have plenty of power. The Corvette has the name, the reputation, nowadays it's just a terrific car, a very impressive car. The old days of the cowl shake and that kind of stuff are gone. And I do my show in America, they build the car in America, it works out real good."

Most of the cars here in your two building are pre-WWII. What about older Corvettes? Are there any specific ones you like best? "Actually, to me, anything post-war is new. I like the '62s, I like the '57 Fuelie, and I like the '65s. The '57 is an all-time favorite of mine. I remember when I was in high school a buddy of mine bought a '56 for 600 bucks and we thought, "Man, it's a little bit high isn't it? Whew, he got screwed, didn't he?'"

How often do you drive the Corvette? "Once or twice a week. With 68 cars, I've gotta exercise all of 'em. I have fun with the stuff and have a good time.

Our meeting with new Corvette owner Jay Leno was entertaining and enlightening. He's down to earth (and earthy, at times), casual, and a hardcore car guy. We found that he writes a column for Popular Mechanics and donates his contributor's fee to help fund an automotive restoration scholarship at McPherson College in Kansas, not because it's a write-off, but because he wants in some small way to change the attitudes some people have about anyone who works with his or her hands and to encourage "kids" to learn some of the skills and craftsmanship that are dying arts. This is something he's passionate about. Out of the thousands of letters that are sent in weekly to The Tonight Show, he has all of the car-related ones separated, and tries, one way or another, to respond to each and every one.

Like we said, Jay's a car guy. He met us wearing jeans and an oil-stained shirt (he'd been tearing down the straight-eight engine in his mid-'30s Bentley), and changed clothes strictly for the photo session. He may be one of the most famous and most recognizable Corvette owners in the world, but first and foremost, Jay Leno is one of us.

How to Install Long-Tube Headers On a 1999 C5 Corvette

For more power, we installed a set of JBA long-tube headers on a 1999 C5 fixed-roof Corvette.

Joel Feingold pushes his 1998 Chevrolet C5 Corvette above 200 mph! Check out the video from Mojave Mile where he makes several standing start runs.