To Some, A Corvette Is Just A Car. To Others It's The Fulfillment Of A Dream, A Way Of Life. 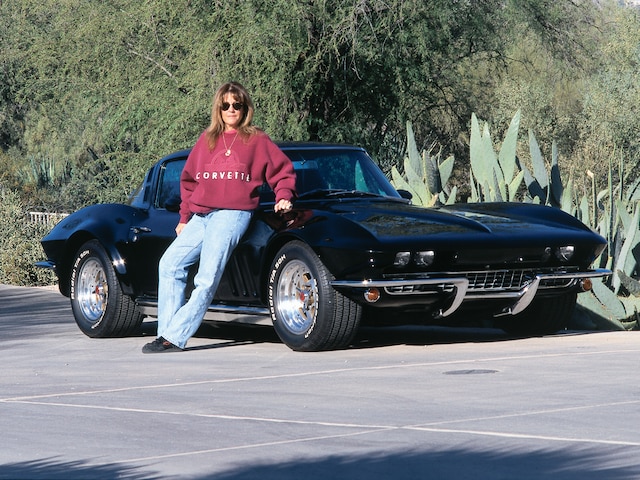 Dreaming. Isn't that how so many of us began our love affair with Corvettes? No doubt, if we think back hard enough we all can remember when the seed of that dream was first planted in our minds.

The Seed is Planted
Laurie "Tex" Schwab remembers that day as if it were yesterday. She was five and growing up in California's San Fernando Valley in a family of car enthusiasts. It was another one of those days when her 16-year-old brother, Marty, and her dad had their heads under the hood of a car in the family garage.

On that particular day, a beautiful red '54 Corvette roadster rolled up the driveway with Marty's friend Kenny at the wheel. Five-year-old Laurie took one look at the '54 roadster and vowed, "I gotta have a car like that."

The seed of the dream was planted. Laurie wanted a cool car just like Corvette Kenny! While other girls her age were dreaming of Barbie dolls and Easy Bake Ovens, Laurie was already dreaming of Corvettes

A Dream Fulfilled
Nine years later, Laurie was visiting her dad in Texas when he took her out to the garage to see his newly-purchased '65 tuxedo black Corvette coupe. Seeing Laurie's excitement at the sight of the Vette, Dad let her drive it on the Texas backroads. That was it! She had to have a Corvette! Getting behind the wheel and actually driving it was certainly enough to keep the dream alive for 14-year-old Laurie.

For many of us, "the dream" isn't fulfilled until middle age, after the youngest leaves the nest. Not so with Laurie! Her dad promised the '65 coupe would be hers at 16 if she did well in school. That would be incentive enough for any kid but to Laurie, already a good student, it was just a matter of waiting. On March 15, 1969, Dad and the '65 appeared at Laurie's house in California.

Cruisin'!
What does a teenager with a hot Vette want to do? Go cruising, of course!

As a 10th grader, much of Laurie's time was spent cleaning her pride and joy so she could cruise "The Boulevard." The place to cruise was Van Nuys Boulevard on Wednesday and Friday nights. The four-speed was bone stock, except for air conditioning, a rare option in those days. It had a 327ci engine with 365 horses. No doubt, Laurie was the envy of many young men on Van Nuys.

For Laurie, her '65 was the beginning of a lifetime of "living the dream."

"I grew up with that car. That car has always been like a friend. It has seen me through many life changes," says Laurie. She still owns that '65. In fact, last year she held a party to celebrate their 30-year anniversary together.

Today, everyone knows Laurie as "Tex," but her nickname goes back to 1970. It's your typical "boy picks-up girl" story. Some guy was writing down her name and phone number so he could call for a date. He looked at her Texas license plate and scratched out "Tex" next to her name. By co-incidence, he was the roommate of the local Corvette club's president, so the name stuck

Volunteering on the newsletter committee put her in touch with the workings of the club. She also became the club's SCCSCC (Southern California Council of Sports Car Clubs) representative, moving into the position of Western States Corvette Council representative the following year. At 20 years old, Tex was elected the club's first female vice-president and at the next election, became its first female president.

That was only the beginning of Tex's notoriety in the Corvette club world. In 1980, she was elected Governor of the Western States Corvette Council's Southwest Region, and in 1982 became its vice-president, a position she held for two years.

In 1984, the Western States Corvette Council convention was held in Visalia, California. Laurie was the overall chairperson of the event and had invited Bob Wollenman, then the President of NCCC, to attend. The two of them had previously talked of bringing NCCC out West, so it was through Laurie's efforts that the West Coast Region of the NCCC was born.

In 1997, Laurie won the executive position of the newly-formed NCCC Roadrunner Region, a position she has held for two years.

Thirty years have passed since Schwab's dream of owning a Corvette became a reality. Today, she's in her third year as president of Desert Corvette Association, the largest NCCC-affiliated club in the country. Tex attributes all of this to her '65 coupe.

"That car formed my reality," she says. "That '65 pulled me from being a shy little person to the president of a Corvette club of over 300 people!"

Tex: The Racer
Laurie "Tex" Schwab grew up with racing. Everyone in her family was into either racing cars or boats. Her dad raced a jalopy in Petaluma, California. Her mom had a hot rod when she was a teen. Laurie's own "need for speed" began at a young age as a speed skater on the ice. It wasn't long before her racing interests turned to cars

Brother Marty contributed to Laurie's love of car racing. According to Laurie, he always had loud, fast cars. She was 13 years old when he took her to Riverside to see her first NASCAR race. Laurie was hooked!

In 1973, Laurie earned her SCCA Solo I road racing license at Riverside International Raceway under the instruction of Dick Guldstrand. Soon afterwards, she took the Solo I B-Production ladies record at Las Vegas. She continued to race at Riverside, Willow Springs, Las Vegas Speedrome, Laguna Seca, and Holtville

In 1983, Laurie, her husband Steve, and Danny McKeever raced a three-hour SCCA Enduro in Steve's '64 B-Production Corvette roadster at Riverside. They finished in the top 10, out of 150 cars!

Since entering the Corvette world, Tex has been an active participant in all types of car racing. Locally, you might find her burning rubber at Firebird Raceway's Friday night drags. She frequently takes Ladies Best Time of Day at the Desert Corvette Association series autocross in her '88 Challenge Car. Away from home, you'll find Tex competing at NCCC National Conventions.

Rubbing Shoulders at the Top
So many of us wish we had the opportunity to meet the legends in the Corvette world who have had such a tremendous impact on America's sports car. Laurie had that opportunity more than once.

Laurie met Dave McClellan for the first time in 1982 when the WSCC annual convention was held in Palm Springs. She was overall chairman of the event being hosted by the Corvette Council, and McClellan was its honored guest and speaker. The two quickly became friends.

Then, in 1984, Laurie was invited to the NCCC Convention in Detroit as vice-president of the Western States Corvette Council. She received VIP treatment at the banquet and had the honor of sitting between Dave McClellan and Zora Arkus-Duntov!

"Meeting Zora was quite an honor for me, as it would be for any Corvette lover!" says Laurie. "To think that I was in the same room, let alone "hobnobbing" with, the Father of the Corvette is a highlight of my life! I am very fortunate to have met him, as his creation is such a big part of my life."

Laurie was at the National Corvette Museum for the unveiling of the C5 in 1997. There, she met Dave Hill. Later in 1997, GM had a local unveiling of the new C5 at Mesa, Arizona's Brown and Brown Chevrolet. Dave Hill was in town for the event and contacted Laurie for assistance with feedback from local Corvette enthusiasts.

A Marriage Made in Corvette Heaven
The secret to a successful marriage is having a spouse who is just as crazy about Corvettes as you are! Laurie married Steve Schwab in 1982. That was truly a match made in heaven-Corvette Heaven! Steve, like Laurie, is also an avid Corvette enthusiast. The two equally share their love of Corvette life, complete with Corvette purchases, maintenance, club activities, events, racing and friends.

A Corvette Household
Corvettes are always a topic of discussions at the Schwab house, where everyone is into Corvettes, including 20-year-old daughter Nicole, who has both owned and raced one of her own. There isn't one room in the Schwab house that doesn't display Corvette memorabilia and photos.

The game room looks like a '50s soda shop, complete with jukebox and soda fountain. It's a comfortable place with a Corvette atmosphere where friends meet and the club executive board ponders important decisions.

Step onto the Schwab's back patio and you'll find a beautiful pool bordered by black and white checked racing tile with a Chevy Bow Tie tiled into the floor.

In the Garage
The oversized Schwab garage is the shrine that houses the family's Corvettes. Here you'll find Laurie's first Corvette, the black '65 coupe. In addition, there's Laurie's '88 Challenge Car, driven in the 1988 Challenge series by Bobby Archer.

There's also a black '91 Callaway. This twin-turbo 425-plus horsepower beauty is RPO#1, the first Callaway built. The Callaway is used for rallies and car shows.

Recently, a '94 copper coupe was added to the Schwab's collection. The color makes this car rare, since only 116 were built that year. The copper coupe is Tex's daily driver and goes to the drags, where it turns 13.8 in the quarter-mile

Steve's '75 L82 four-speed blue roadster has only 7,800 original miles and is a winner of the NCRS Top Flight award. This is Steve's show car. The Schwabs also have a black, matching-numbers '58, which is a resto project.

The Dream Lives On
"What better way than to grow old and to have loved Corvettes!" Laurie says with all her heart.

With hardly a stretch of the imagination, one can easily picture Tex at 80 out there racing her Vette with the best of them.

Laurie has truly been living the Corvette dream most of her life. Maybe it goes back to that seed being planted in her family garage when she was five. Maybe it's just in her blood; after all, she and America's Sports Car were both born the same year. Whatever the case, her energy and enthusiasm for the Corvette sport is an inspiration to us all.

Check out how this 1994 Chevy Corvette Convertible was transformed into an 11-second C4. Vette takes you through the process of engine and transmission modification, showing you that a C4 can definitely match the quarter-mile performance of a new Z06, without having to install a turbo, a nitrous system, or other power adder. Check out the details and pictures at Vette Magazine.

These two 1994 Chevy Corvette ZR1s are truly "Two Of A Kind!" They are in perfect and stock condition, featuring LT5 engines, 405 horsepower, and much more! Check out the exclusive pictures and details at Vette Magazine.

This 1994 Chevy C4 Coupe is an LT1 and it isn't the only Corvette drivers are showing-off. This article features many other Vettes ranging from '88 C4 Convertibles to '65 C2 Coupes. Check out the details and pictures at Vette Magazine.

Check out this 1994 Chevrolet Corvette Coup that comes equipped with an OHV V-8,Chevrolet LT1 engine and a LT4 intake from Corvette Fever Magazine.

Check out what other readers thought when we decided to put a little bling into the magazine and let us know what you think at Chevy High Performance.

In this month's Righthand Drive, we discuss the history of the Roundabouts in the United Kingdom and how the C4 Corvettes were made for them. - Corvette Fever Magazine