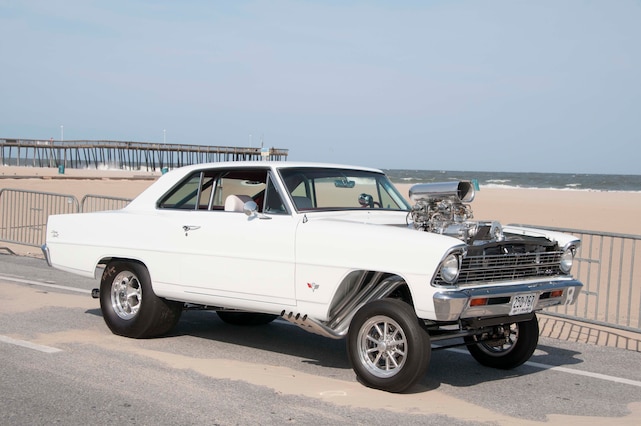 Growing up in the '60s was the perfect time to get indoctrinated into the world of hot rodding since auto manufacturers were filling the streets with some of the hottest muscle cars. For Tom Collins of Montross, Virginia, his earliest memories revolve around growing up on a small farm in Dublin, Maryland, where he first discovered his passion for anything mechanical. Starting out with go-karts and mini-bikes it wasn't long till he was honing his driving skills by driving cars through the family fields long before getting his license. If something broke he and his buddies would tear it down, analyze the problem, and find a fix to get running again. Hopped-up cars ruled the streets in his town and as Tom describes it, "they were everywhere to be seen."

The tuning point was seeing a local 1941 Willys Gasser in person on a regular basis with its straight-axle mile-high frontend, supercharged V-8, and its massive rear slicks. On his first visit to nearby Cecil County Dragway he stood in awe as the car roared to life and took on the competition launching down the quarter-mile. From there a sea of Gassers, Alterds, and A/FX racers would overtake his mind. He also spent plenty of time in Delta, Pennsylvania, hanging out at Jady's Restaurant and watching plenty of late-night racing on Highway 74. As the years passed Tom became owner of Northern Neck Chevrolet in Montross and has owned plenty of aggressive cars, including a pair of Chevelles, but he never forgot the adrenalin rush he experienced watching Gassers run. He started a search for an early Chevy II Nova as a perfect candidate to capture the excitement of drag racing in the '60s. A local friend happened to have a 1967 model that had been a drag car back in the '70s. It had been gutted of its driveline and left in a garage for the last few decades. A deal was made and he hauled the car home to await its fate.

To create a period-perfect Gasser, he brought the car to Brian Bell and the team at B'z Rods in Beach Park, Illinois, to take on the build. Before long the car was torn down and ready for a fresh start. For a rock-solid base a custom frame was fabricated from 2x3-inch steel with one-off crossmembers and TIG-welded directly to the body. Out back a narrowed Strange Engineering 9-inch rear from Chassis Services in Waukegan was packed with 4.11 gears spinning matching 31-spline axles was suspended in place by B'z custom 54-inch ladder bars combined with their exclusive four-way track locater and Strange Engineering adjustable coilover shocks. Up front it's pure nostalgia with B'z straight-axle subframe kit complete with axle, custom forged spindles, 29-inch parallel leaf springs, Vega box, and PRO tube shocks. To tame the beast a Strange Engineering dual master pushes fluid through stainless lines to Wilwood drilled and slotted discs with Dynalite four-piston calipers at each corner. Linking it to the street are classic E-T Fueler 15x12 wheels out back wearing Mickey Thompson ET Street bias-ply rubber with 15-inch front Rocket Racing Launcher wheels topped with Pro Trac/Coker rubber.

If you want a Gasser you'd better have plenty of go under the hood. Tom contacted Big Al's Toy Box in Gaylordsville, Connecticut, to build a 540ci fire-breather starting with a Dart Big M Sportsman block filled with an Eagle 4340 forged steel crank linked to matching H-beam rods topped with JE forged 8.5:1 pistons. A COMP Cam sets the beat while a set of massaged Advanced Performance Engineering aluminum heads generate plenty of power. An 8-71 supercharger from The Blower Shop topped with a pair of Holley 950-cfm carbs seals the deal with 920 hp on the dyno. An MSD ignition lights the fire while custom zoomies from B'z dumps the spent gases. Power moves rearward thought an ATI Fuel Comp T400 trans with a 3,000-rpm stall to a custom driveshaft by Mark Williams.

The body was first blasted clean to outline any of the problem areas. Surprisingly the sheetmetal was in restorable condition and the team got busy first replacing the interior and trunk floors then moved onto metalfinishing the entire body and setting all the gaps. They followed by stretching the rear wheelwells 4.5 inches to accommodate the new slicks and filled all unnecessary holes in the firewall. While in bare metal the car went to Danny Ray's Custom Auto Body in Gurnee to massage it to perfection and lay down a flawless coating of PPG 1982 Corvette White. Inside an eight-point rollbar keeps it safe while a stock dash holds a custom switch and gauge panel with Stewart Warner dials as well as a dash-mounted Sun tach. A Mooneyes steering wheel plots the course while shifts fly through a Hurst unit. B'z installed the black loop carpet and headliner while the final icing was by Seams Ridiculous of Montross, who trimmed the seats and panels in a wicked white roll and pleat accented by metalflake red and white vinyl. Additional custom fabrication and final assembly were completed by Gatton's Garage of Montross. This is one Street Shaker that you'll remember long after you see it.