Fifth-Gen Camaro Modifications - Slam It, Bang It, & Hear It

A few simple modifications will improve the looks, drive, and sound of your Camaro 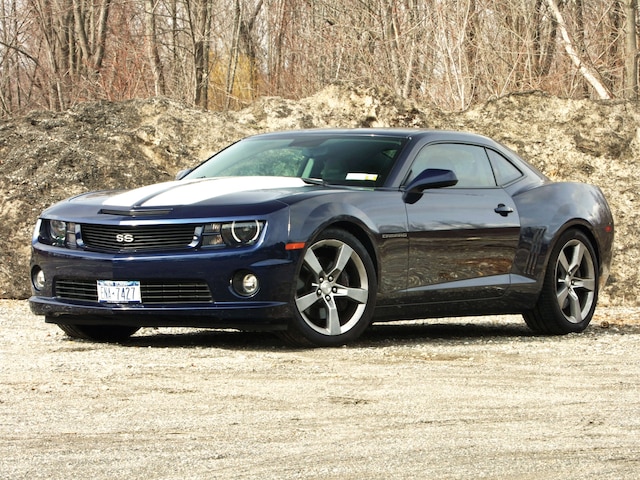 It all starts with a few modifications to make your fifth-gen Camaro a little nicer, a little quicker, and a little different than the one next to you. After some fun, unfortunately, the novelty wears off and you are left yearning for more. Those who caught our last issue will recall John Franco's Imperial Blue Metallic SS that we installed a set of Dynatech long-tube headers with high-flow catalytic converters, AIRAID cold-air kit, and a custom tune from East Coast Supercharging. The modifications brought output from a baseline of 340 rwhp to 404 rwhp while adding a nice rumble when he jumped on the loud pedal. And John thought this would make him happy, but he yearned for more noise and a more aggressive stance. As the spring season was rapidly approaching he needed to make a move. John turned to LSR Performance for lowering springs and a short-throw shifter. He also added a set of Pype-Bomb mufflers from Pypes Performance Exhaust to give his car a little more growl around town.

The Pype-Bomb mufflers are a straight-through design that can certainly add some noise. The tube muffler, which is the easiest way to describe the Pype-Bomb, features a louvered core that exits through dual-wall four-inch tips. It bolts on to the factory pipes and requires cutting off the OEM mufflers. We've heard quieter mufflers than the Pype-Bomb, but what we liked most was the nice highway cruising at 2,000-2,500 rpm. The Camaro was noticeably louder, but it didn't have the persistent drone that's associated with other mufflers at those engine speeds. We suggest checking out the Pypes Performance Exhaust website for videos of the exhaust tone of the Pype-Bomb.

Now that we had the sound, it was up to LSR Performance to provide the look. These days the factory seems to make every sports car look like an SUV, so lowering any GM ride will add to the coolness factor. The LSR springs eliminated the rake look by making the back and front sit even. The front end is dropped 1 inch while the backside gets lower to the ground by 1.25 inches. Typically a lowered vehicle handles nicer due to a drop in the center of gravity and more optimum spring rates. We didn't get on track to chart the results, but John told us that the car felt better through the curves on some twisty backcountry highways. He did report the ride was a little rougher on the pothole-ridden New York roads, but it certainly wasn't uncomfortable. We chalked it up to the price we pay for looks-sort of like some women complain of foot pains but refuse to change their stylish shoes to something more comfortable. The better stance of the fifth-gen was worth the trade-off.

Our test vehicle has a six-speed manual transmission that offers four drive gears and two Overdrive ones, making highway driving a pleasure. The custom tune from East Coast Supercharging eliminated the skip-shift action, which is officially known as Computer Aided Gear Selection (CAGS). The skip-shift was designed to save fuel in around-town driving conditions, but is more of an annoyance than a fuel savings. Its elimination is an improvement, but a short-throw shifter was on the list of modifications for those spirited driving moments. The LSR Tri-Ax shifter allows the user to choose between two heights. The stock height setting, according to LSR, offers a 20-percent reduction in throw while the lower hole (1 inch lower than stock) cuts the shift distance by 33 percent. The shifter can be infinitely adjusted between those two points. The Tri-Ax is made from billet aluminum and coated in nickel for longevity. Other than the shorter throw, we noticed that shifting gears was much smoother than stock, which in this car was a little notchy. The notchy feel wasn't terribly bad, but the LSR Tri-Ax definitely cleaned up the shifting action while making it easier to bang some gears in the process.

Total turn around time was a mere four hours thanks to minimal intrusion from the photographer. On the cost front, the lowering springs go for $249.95 while the LSR Tri-Ax shifter is listed as $169.95 with the optional engraved black shifter ball. The Pypes Pype-Bomb mufflers showed up on our doorstep for just $289, without the cost of shipping. The only additional cost came from an alignment since the suspension's geometry was changed. A typical alignment job performed by a reputable shop in the New York metropolitan area costs approximately $90 plus tax. Totaling it all up, this package set John back less than $1,000-without installation costs since we did the work ourselves.

The car looks nicer, drives smoother, and sounds better thanks to some simple and reasonably priced modifications.