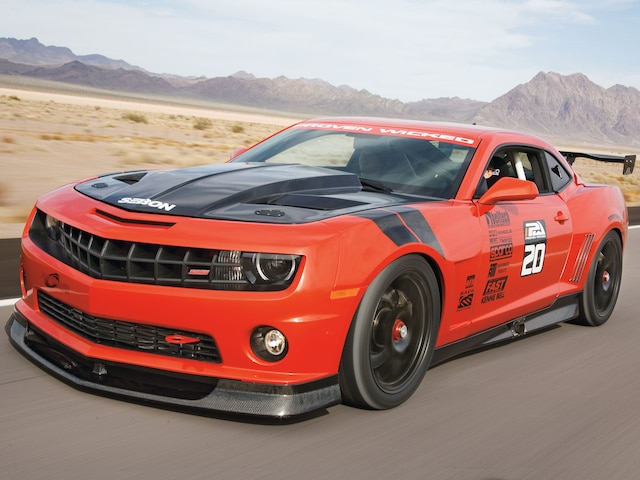 Strapped in between the side bolsters of your Sparco race seat, you nervously wiggle the shifter back and forth one last time, look around slowly, and finally reach forward to turn the key. Instantly, the desert's silence is broken, filled with the rumble of 568-ProCharged horsepower breathing through a pair of long-tube headers and a skull-splitting side exit exhaust. Clutch in, click first, blip the throttle, and start rolling. Not 30 feet later, as the distant mountains begin to echo the roar that is a quickly accelerating LS3, it's big-boy, foot-to-the-floor, hang-on, and shift time; 30, 60, 90, 120, 140-the needle continues sweeping upwards, moving faster and faster with each flame-throwing, tire-shredding gear change. Unlike a quick blast on your way to work, you're planning to stay buried in the throttle for 90 miles, working your way through the desert at top speed. You're Shane Wagner and this isn't a dream, it's the reality of owning Proven1, a '10 Camaro built from modest beginnings to showcase the talents and skill of a small company from Nevada called Proven Wicked.

"The idea behind this car was to build a car that looks as though it should be on a race course, performs like it should be, and also is street legal with all the amenities for a road trip like radio and climate controls. We wanted to take the extra step to not just use common off the shelf bolt-ons, but dream up the best possible products to do the job right and give the authentic race car stamp of approval." If we had one of those race car stamps handy, we would be using it right now.

From standing on the sidelines, it's easy to notice the extreme race car-inspired look and feel of Shane's Camaro. From the slick Seibon carbon front lip to the side-exit exhaust poking through the carbon rocker panels, there is nothing subtle about this Camaro. In fact, even the parts that look stock, including the door and the front fenders aren't; they are built from carbon fiber, too. Of course, it may be hard to even notice all of that carbon if you can't get over those awesome 20x11-inch HRE P40 Monoblock wheels, which hold tight to the hub using a single center lug, much like the Formula 1 or ALMS cars we all look up to. Not a fan of the wing? OK, but what if we told you that it is actually fully functional and that under the carbon-fiber trunk lies a pair of slick load structures, which transfer down force from the wing to the chassis of the Camaro, further adding to its available traction at high speed.

And, traction is an issue, believe us. Under the hood, Shane kept things fairly simple, understanding that reliability is part of a winning formula and that road racing, auto crossing, and street driving don't always require massive amounts of horsepower to be done correctly. That said, Shane still wanted a ton of extra horsepower on tap, a problem he solved with a centrifugal supercharger from ProCharger. The D-1SC serves as ProCharger's mid-level supercharger and with nothing more than a couple of supporting modifications, Proven1 lays down more than 568 rwhp and 504 lb-ft of torque, which is surely enough to get anyone going.

With horsepower and looks taken care of, it's time to talk about the real magic of this Camaro-the suspension. To make sure the Camaro stays firmly planted to the asphalt, Shane started the build with a set of KW Variant 3 coilovers, which he complimented with several of his own unique custom products. Fore and aft, Proven1 relies on a set of Proven Wicked Switchblade sway bars, which are based on a unique blade design that allows for five rate adjustments without changing the angle of the endlinks and without having to break out any tools, thanks to a set of quick release pins that retain the blade in the desired location. If that sounds high end, it's because it is. You see, Proven Wicked isn't a company that just bolts on parts it buys off the Internet. Oh no, Proven builds everything to exacting tolerances and has to pass each part through a strict computer simulation before it can ever be tested on the car. "All the Proven Wicked products were designed using 3D Computer Aided Design (CAD) software and, if needed, analyzed for stress, deflection, and failure using Finite Element Analysis (FEA). We utilize 3D data directly from GM to assure the utmost precision in fit and function."

It's that level of dedication that allowed Shane to build a car of this caliber and it's that attention to detail that earned him a spot in Camaro Now. Oh, did we forget to mention that this entire car was built in just two months? Yeah, that must have slipped our minds... "Overall for two months to plan and build a car after normal work hours and have the outcome we did is a tremendous feeling of accomplishment and reassurance for the future of Proven Wicked and its capabilities. Plans moving forward are to participate in SCCA autocross events, track days, the Silverstate challenge, and eventually Bonneville Speed Week. It will be driven hard all over the country both on and off the track."