We Add A Couple Of Simple Bolt-Ons To An LLT V-6 Camaro, Helping It Breathe A Bit Better And Make Some Extra Horsepower 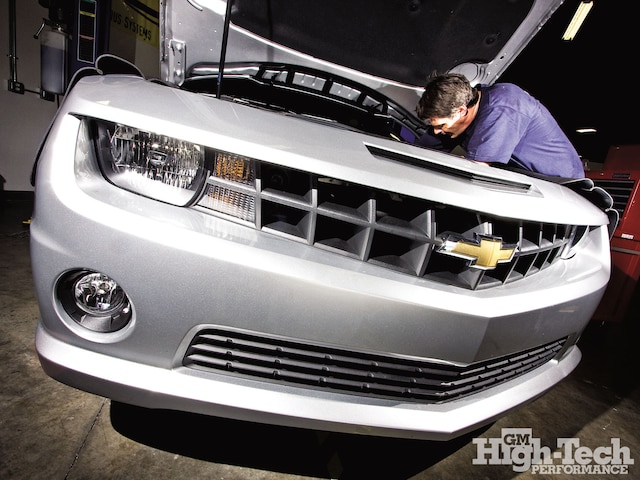 Known internally as the "High Feature V-6" and named one of Ward's 10 Best Engines of 2008, the 3.6L GM LLT V-6 represents the current pinnacle of GM engineering. Whether you are a current fifth-generation V-6 Camaro owner, an enthusiast still on the fence or a die-hard V-8 fanatic, once you start looking into the specs, you can't help but be impressed by this little powerhouse. On paper alone the LLT V-6 packs an impressive list of features, including an all aluminum construction, dual overhead cams, variable valve timing and, most significantly, Spark Ignition Direct Injection. SIDI, as it is known, is a first for the Camaro, using a camshaft driven fuel pump to pressurize incoming fuel, slamming it directly into the cylinders, as opposed to the intake manifold, for a much more efficient and complete combustion process. By moving the LLT to SIDI, GM was able to do a number of things with the V-6 that its big brother can only dream about. First off, GM was able to build the LLT with a ton of compression (11.3:1 to be exact), which helps it make more power than a traditional V-6. Secondly, direct injection allowed GM calibrators to tune for maximum power on regular (87-octane) gasoline, giving power to the people at the pump, allowing us to make great horsepower on cheaper fuel.

Now, we know that what looks great on paper doesn't always work in the real world. So, what does all of this mean on the street? To put it bluntly, it means the high-performance game has changed. Consider that the 5.7L LS1 was rated at 320 hp in the fourth-generation Camaro, while the base model LLT V-6 fifth-generation Camaro comes in at a stout 312 hp, on 87-octane, with better fuel economy and a lower price. Of course, we all know that the LS1 is one of the most responsive engines to modifications of the last 100 years, so the question became, how well would the high-strung LLT V-6 do? To find out, we teamed up with BBK Performance, a name synonymous with bolt-on power, to install a pair of long-tube headers, some high-flow catalytic converters and a new V-6 specific cold-air intake. What we found was both surprising and promising, but you're going to have to read on to find the results. If you want to know more, check out the next couple of pages and follow along as we watch Kevin Murphy and Artie Schafer of Brothers Performance tear our V-6 test Camaro apart and build it back better than ever.