Church Boys Racing look over the Novas and make 'em sing like a choir. 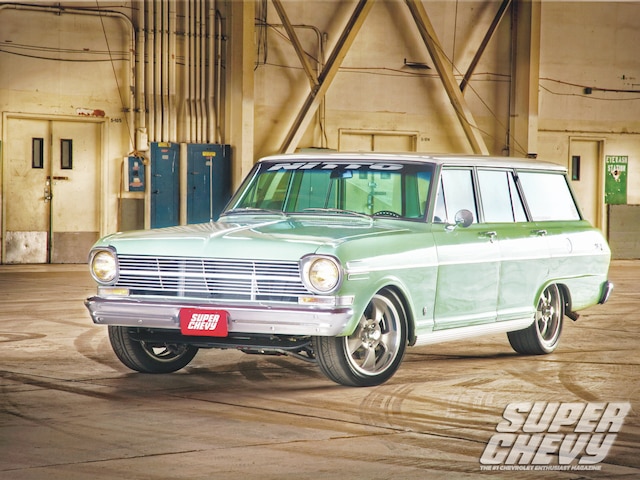 The '62-67 Novas have a bad reputation when it comes to handling in stock form. As an inexpensive, entry-level car, maximum lateral g-forces were not a priority for the development engineers. Plus, when first designed, the biggest engine the Chevy II had was a six-cylinder with about as much grunt as a good bowl of chili. As such, the front suspension was engineered to handle the factory spec'd four- and six-cylinder engines, nothing more.

When the first V-8s started dropping in, all hell broke loose. Drag racers found on hard launches the Nova would quickly become a handful to control, and on the street they were equally difficult under heavy acceleration and maneuvering. The cause? GM engineers didn't beef up the steering and suspension beyond the springs to handle the use and abuse of a V-8. Ingenuity and experience soon led to a number of band-aid fixes that made things manageable, but the underlying problems were still there.

Fast-forward almost 50 years. The aftermarket suspension industry has embraced the Deuce and its flaws, to the point that now you can bolt on some parts and have your '62-'67 handling like a late-model Corvette, no matter what engine is up front. One of the leading companies in the Nova market is Church Boys Racing.

Their entry for this year's challenge was Joe and Denise Rea's '62 Nova wagon. They found it on Craigslist in Orange County, California. A typical SoCal car with zero rust, they put 600 miles on it their first weekend of ownership. With cruising across the country to the National Nostalgic Nova Nationals in mind, January of 2011 saw the Nova disassembled for some restomod work.

The original engine was pitched for an LS1 and 700-R4 trans, the car was fully rewired, and the suspension revamped with the full spectrum of parts from Church Boys. To make installing the LS1 easy, Church Boys (CB) new power rack-and-pinion steering was installed. Besides effortless car control, the kit also negates the need for a special oil pan, due to the stock steering system being eliminated. This means any small-block oil pan will work in an early Nova. Also installed were CB's upper and lower control arms, which greatly improve camber gain over the factory arms. Cushioning the ride are CB spec'd adjustable coilovers made by Varishock, in either single- or double-adjustable form.

The beauty of the Church Boys kits is they all bolt to the factory front subframe, making for easy installation even in a home garage. It took the Reas a mere six months to get everything installed, aligned, and ready for the street.

In the back things are simple, with CB's 5-1/2-stack leaf springs with adjustable shocks. The half leaf (placed forward of the axle) resembles the old super stock springs racers used in the '60s to help handling under load but not cause a harsh ride. For brakes, the binders out of a '98-02 F-body were installed using CB's bolt-on caliper brackets and accessory kit. This gives the Nova superb stopping power for less than $1,000.

"Tighten up them belts ... " and I sure did, as it had been eons since I'd flung anything automotive quickly through cones while (trying to) stay fixed in stock seats. The Church Boys have been playing with Chevy Novas for a while and have made some serious headway helping these cars get around a corner while retaining pleasant street manners. This little wagon had a ton of good stuff going for it and very little that didn't ... stock seats notwithstanding. The Nitto Invo tires allowed me to play "throw and catch" when it was warranted, and the wagon happily trail-braked when asked.

Launching, I was very impressed with the acceleration and laid this wagon slideways entering the initial slalom series. The steering was a bit slower than I'd like, but brand-spanking-new tires with brand-spanking-new virgin tread give a gob of squirm. I'm pretty sure that's a huge part of what I felt. Planning ahead, I'd present the Nova to the start of the element really, really early, then turn in and point the nose directly at my desired turn-in cone knowing that the message wouldn't get to the tires until I actually needed it to be there. Sideways worked pretty good and was also really, really fun (read: predictable) with this car.

Into the lane changes and around the end posed minimal issues. This wagon does have a bit of lean, and that's not necessarily a bad thing in my book. The suspension must be able to travel. One of my pet peeves is locking a car down with monster springs, which loses that vital ingredient: road and track compliance. Completely the opposite, the Church Boys Nova was very compliant and gave me good feedback ... both wonderful things as they're manageable for the average shoe. If I was building a Nova for a street cruiser that could handle well, it doesn't get much better than this.

Hauling the mail back through some offsets and into the Chicago Box found the brakes getting grabby on initial application, and I suspected I'd overheated them on earlier runs. Not sure what brand of friction material was being abused, er ... tested, but I would have liked to see them stay more linear and with better feel throughout all five runs. Like the steering, I was able to modulate the brake pedal to "just that point" and then get in and out of the element.

After the Box, the Nova planted its nose entering the tight righthander, then rotated its wagony self around and transitioned smoothly back left and out. This was a very easy car to drive, and got through the final slalom series to the end very well. Like most of the other cars I tested that day, I have no idea of the final times turned, but who cares? This is one ³ber grocery-getter, and I'd have no problems hanging it all out on any twisty, winding road, all the while laughing hysterically playing "catch me if you can" with much pricier and more sophisticated machinery. Just put in some serious aftermarket "lock your butt in" seats first! --Mary Pozzi.

Ever wonder why old cars were seemingly so inexpensive? The interior of this Chevy II explains it perfectly. It's the Mayor of Simpleton. That's just fine by me. This one has bucket seats, Classic Instruments gauges, and a Lokar shifter--and precious little else.

As they were designed for entry-level customers, the early Novas were not known for ride comfort, Corvette-style handling, or precision steering. I guess no one told the guys from Church Boys that, because this Deuce possesses all three of those qualities. The ride was a little bouncier than I'd normally like on the street, but I prefer that to a vehicle that's too stiff. The rack-and-pinion steering was especially to my liking--quick but not too much so. It offered excellent feedback, far superior to that of the 2011 Camaro SS bogey car. Turn in was first-rate, too.

What I especially liked was just how wonderful everything worked together. Like the early Chevy II itself, there's nothing exotic here. The tubular control arms offer an improved camber curve and more caster, which is a combination that every early Nova could use. That simple bolt-on parts could make such a radical difference in the performance of a 50-year-old econo-wagon had me shaking my head.

If you are into numbers, you'll notice the Church Boys entry sliced and diced its way through the autocross course 7.03 seconds faster than the SS. That this improvement comes without any negatives in the ride department speaks volumes (actually, the ride is better than stock). That's outstanding performance at an affordable price. --Jim Campisano