Many builders make sacrifices to meet a deadline. Divine One Customs’ owner Misha Munoz risked getting burned alive to meet his 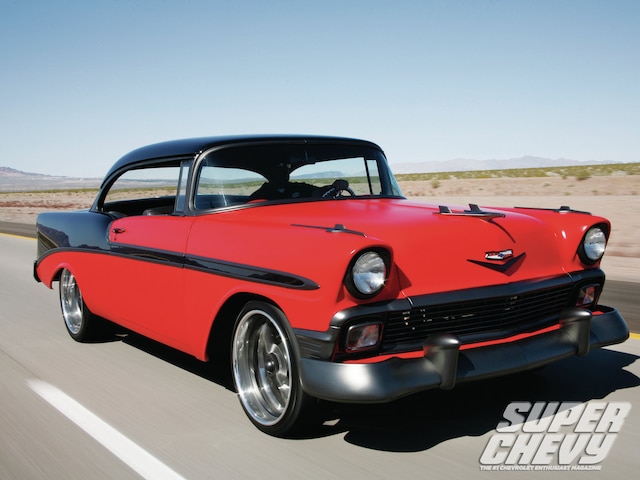 The flames licked at the back of his neck as he barreled through the crackling countryside with his ’56 Chevy Bel Air in tow and an inferno in hot pursuit. It was the summer of 2009 and the wildfires in SoCal burned hotter than the Dragon Red that Misha Munoz planned to eventually paint the ’56 two-door … if he survived this blistering blaze through Hell’s Kitchen.

The reason that Munoz risked his hide in the wildfires was to get to the CARS Inc. warehouse in Southern California. This company has a reputation for providing parts that turn Swiss cheese into solid gold, and the two-door you see before you that had originally seemed like such a solid score when purchased was in fact just the opposite—full of holes.

Munoz originally found the car in an Iowa cornfield. After some careful scrutiny of the pictures (apparently the ones posted on the Internet) he purchased the car and took delivery of it August 9, 2009, at the headquarters of his shop, Divine One Customs, which is based in Las Vegas.

“We soon realized that this car had an unfair amount of rust,” said Munoz. “Every time we removed, moved, or sectioned a panel, rust, dirt, and even a rock or two fell to the ground. The entire floor, braces, quarter-panels, roof sections, and frame were completely cancered.”

Before the near fatal analysis of the body damage, the plan had been to have the car ready for SEMA in less than three months. Once they saw the body though, the plan to debut the car at SEMA seemed that much more daunting.

“Old beer cans had been used as body filler,” said Munoz. “We even kept some as proof.”

Whether or not CSI could determine the last rebuild with the composite of beer cans remains to be seen, but one thing was for sure: Divine One needed replacement body parts and they needed them yesterday, facilitating the aforementioned trip in person to wildfire-ravaged SoCal to pick up the amalgam of parts.

Despite the heat, Munoz forged on through the fires with a wet rag on his mouth to avoid smoke inhalation. He made it to and from CARS Inc. with the requisite parts in under 36 hours. Upon his return he fell from the cabin of his truck, covered in ash and hacking uncontrollably. His crew ran to his aid. “Get to work! Our reputation is at stake,” he cried as he passed out by his melting tires.

Speaking of tires, the ones that this Bel Air puts the power to the ground with are 255/30/20 Continentals fore and 295/30/20 aft. The rims these rubbers wrap are Colorado Customs Dallas models measuring 20x8.5 up front, while the rears are twinny-twin-twins by tenny-ten-tens.

The entire chassis is brought down upon this rolling stock courtesy of Ride Tech Air Ride suspension, while ABS drop spindles let the front end get down to business.

But we’re getting ahead of ourselves. Before Munoz and crew put on the rollers they had to complete the body and chassis. They smoothed and painted the latter before fabbing engine and tranny mounts for the newer powerplant. Other preparations for the power that a stock ’56 wasn’t made for included the addition of a crossmember. The story gets wilder.

While Munoz recovered from smoke inhalation in the local ICU, the rest of the team got cracking on the paint and body.

“With the future of the shop and its reputation on the line, and every penny we had invested, we plowed forward sandblasting, sectioning panels, and coating everything in direct to etching primer,” says Munoz. Every orifice of the car had to be cleaned up before it could be put on the world stage. The antenna, wiper cowl, license plate, and side mirrors all went under the Bic. After smoothing the rear bumper, they applied the two-tone GM Black and Dragon Fire Red with Starry Night Silver trim. As Wesley Snipes would say, “Always bet on black …” Or red.

With the body nearly sorted out, it had come time to install the new motor. “ The arrival of the LS1 TurnKey Engine and the 700-R4 tranny was just what the team needed for a little kick in the pants,” says Munoz. “Even after realizing we had taken on a lot more work than we had planned on, the team of five didn’t back off the challenge. Instead they gave up their weekends, evenings, lunches, dinners, and plenty of sleep all while fighting off colds and flu.”

While throughout most of the build Munoz had been awakening groggily in the ICU to give orders, with eight days to SEMA and paint and assembly still not quite complete, he disobeyed doctor’s orders and checked himself out of the hospital, assisting with the rest of the build from a wheelchair.

Super Chevy finally caught up with Munoz in early 2011. It seems that every time we have a shoot in Vegas we have to postpone it after waking up in the sweltering mid-day sun in front of Slots of Fun. The good thing is, at this point the interior had been finished. A Colorado Customs steering wheel is surrounded by heaps and heaps of black and gray leather and suede. This was done by Divine One and Master Custom upholstery. The signal processor, amps, subs, and speakers are all from Kicker, but the real Kicker is this: the head unit. It’s an iPad molded into the dash! Now if that’s not a show-stopper we don’t know what is.

Misha Munoz didn’t really suffer third-degree burns and end up in the ICU after California wildfires. He didn’t really pass out next to the melting tire of his truck. He didn’t really lug body panels around while in a full body cast from his wheelchair. What he and his shop did do is build one badass ’56 two-door to bring him and his stepdad closer, as it has always been his favorite.

And those wildfires, well, they just might have singed the Bel Air a bit, cause it is one blistering hot Bow Tie.