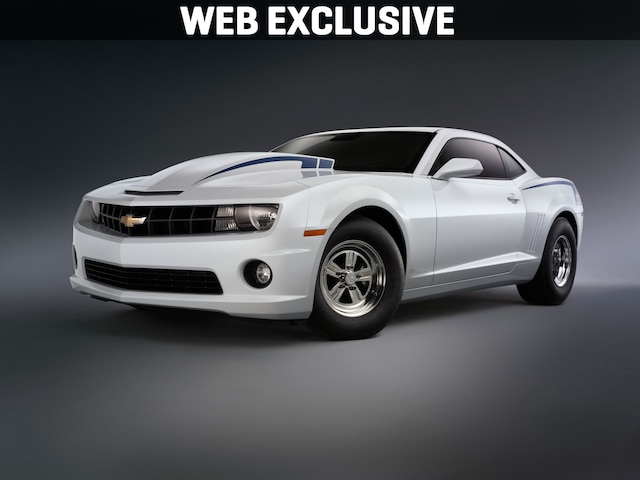 With its bankruptcy in the past, General Motors in, well, general, and Chevrolet in particular, are 100 percent back in the car business. On the eve of the 2012 Specialty Equipment Market Association Show (SEMA) in Las Vegas, Chevy unveiled a trio of Camaro concepts that are sure to get the blood of enthusiasts boiling.

Two of the names--COPO and 1LE--harken back to two of the greatest performing Camaros of the past. While one a slave to the dragstrip and the other a road-course legend, while the third car recollects an icon no one ever got a chance to drive, but was purchased by millions: The Hot Wheels Camaro.

First up is the COPO. In a nearly empty parking lot across from the Las Vegas Convention Center was a giant wooden crate. "What's inside," many wondered. The only clue was the part number on the box: PN20129562. Only your humble scribe figured it out. The 2012 was the model year and 9652 the code for a COPO Camaro back in '69.

Back then the mission was to dominate on the street. This time, it's a supercharged 5.3-liter engine with an LSX block designed to take on the Cobra Jet Mustangs that have turned NHRA Stock Eliminator drag racing on its ear. With a Whipplecharged engine, Powerglide trans, NHRA-legal cage and 9-inch rear, the 2012 COPO was a site to behold. The minute its engine fired and the exhaust exploded from the open headers, people were in awe. (It's not every day GM hands out ear plugs at a new car intro!). While we won't have a drag test on it for a while, we know it'll be the quickest Camaro Stocker ever produced.

Another version could have the 427.5-inch LS7 (see GM's announcement below). Chevy would need to sell 50 per year to legalize the cars for NHRA competition.

Camaro 1LE Concept
The 1LE was introduced to a lot less fanfare, but if you read between the lines, it's mission is to demolish the new Ford Mustang Boss 302.

Born in the Camaro's third generation and refined further in the fourth generation as a road-racing performance package, the legendary 1LE option code designation returns to the Camaro as a concept intended to carve up road courses. While only a concept, it borrows production components from both the Camaro SS and forthcoming Camaro ZL1 to deliver a competition-ready package. Hash mark graphics on the front fender are pure Chevrolet racing cues, too.

As for the Hot Wheels Camaro, it's strictly a styling exercise, one designed to invoke the spirit of the original Hot Wheels cars of 1968. From the translucent green paint with black and red accents to the totally awesome hood, this bad boy made grown men want to get down on their knees and make vroom, vroom noises again.

Camaro Red Zone Concept
A design statement achieved with current and future accessories is the inspiration for the Camaro Red Zone Concept. It uses the Camaro convertible's style to demonstrate what's possible with a carefully selected collection of accessories - and it debuts a new, heritage-inspired stripe graphic that will be available soon. The result is a tasteful combination that blends contemporary style with a classic flair.

"This is a Camaro for those who want great looks and a performance personality," said designer Adam Barry. "It's a simple yet dramatic statement that is uniquely Camaro."

From The Chevrolet Press Release

LAS VEGAS - The COPO Camaro is back at Chevrolet, as a concept designed to the specifications for NHRA Stock Eliminator drag racing competition.

"The COPO Camaro is a proof of concept for what a Chevrolet Stock Eliminator entry could look like," said Jim Campbell, GM U.S. vice president of Performance Vehicles and Motorsports. "And it is a clear indication that Chevrolet intends to homologate the Camaro for sportsman drag racing."

The COPO concept vehicle is designed to accommodate more than one engine option, including a naturally aspirated 427 engine (7.0L) - the same displacement as the original COPO Camaros from 1969 - and a supercharged 327 (5.3L) engine. Among the many racing-specific features and equipment is a conversion from the Camaro's standard independent rear axle to a solid axle, as well as a full chrome moly roll cage.

The basic content for the COPO Camaro Concept includes:

The interior is all business, with most sound deadening and power accessories deleted. Instead, there is pair of racing bucket seats (and no rear seat), a safety harness for the driver, a competition floor shifter and Chevrolet Performance gauges by Auto Meter.

The Engines
Intended for NHRA's various Stock Eliminator classes, the COPO Camaro concept has provisions for two distinct engine packages - each built to conform to class guidelines. The details below outline the core specifications of each engine and their intended classes.

The concept vehicle is powered by a prototype version of the supercharged 327 engine, featuring an LSX cylinder block.

The COPO legacy
Since 1955, NHRA Stock Eliminator has been a straight-line proving ground for the quickest cars to come out of Detroit. Within Stock Eliminator, there are many classes, all defined by the ratio of vehicle shipping weight and the assigned horsepower factor. Because of this tightly monitored set of rules and historically brutal competition, Stock Eliminator is the ultimate test for factory muscle cars.

From the "Fuelie" '57 Bel Air to the '62 409 Impala and countless muscle cars that came later, Chevrolet has enjoyed a long, dominant position in this sportsman drag racing category. None of the cars, however, have dominated both the track and muscle car folklore like the legendary COPO Camaros produced in 1969.

In the Sixties, COPO was the acronym for Central Office Production Order, within Chevrolet's vehicle special-order program. Although normally used for fleet orders of trucks and company-owned cars, it was manipulated by a few performance-minded dealers to order vehicles with larger engines than were available in regular-production models - mostly with the intent of getting them to Stock Eliminator racers.

By pushing Chevrolet's Central Office Production Order special-order program to its limit, a number of dealers were able to get 427-cubic-inch big-block engines installed in a handful of Camaros, when the largest official engine available was a 396. Two versions of the 427 engine were wrangled out of the factory: COPO 9561 was the Corvette-based L-72 edition with an iron cylinder block and COPO 9560 was the racing-designed ZL1 engine with a lighter aluminum cylinder block.

The COPO Camaros opened up the NHRA rulebook to some exciting combinations for Camaro, helping keep Chevrolet at the top of the ultra-competitive form of motorsports. In fact, they were not only competitive in NHRA Stock Eliminator when new, but still hold the national ET and MPH records in several classes.