The ’61 Impala is often overlooked by Chevy enthusiasts, but Bruno Cirello aims to change that 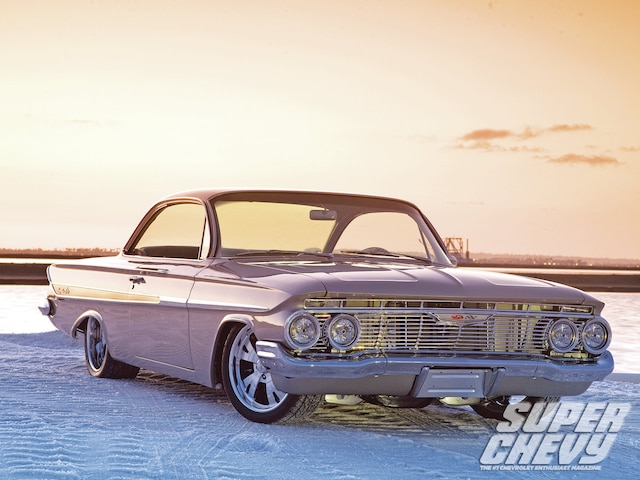 "When I started this two-year restoration, I had yet to see a '61 bubbletop customized into a restomod to my liking," Bruno Cirello said. "Also, that year is not so popular. I thought if I could make it look cool, people may learn to appreciate the vehicle."

Not that the '61 is a dog. It happens to be the year Chevy introduced both the SS and the 409 engine. While the '62 is more popular with enthusiasts, there is nothing quite like the clean look of the original bubbletop.

"I actually bought the car for $4,000 off of Craigslist in Los Angeles," said Cirello. "The previous owner brought the car to San Diego for me. It was a black lowrider without much interior."

Thanks to Bruno, another fullsize Chevy classic has been saved from the indignity of being a pavement-scraping circus wagon.

After assessing that always-important characteristic of a rust-free body and chassis, Cirello put the car on a rotisserie in his garage and proceeded to strip it to the frame. Once in that state of vulnerability (the car, not Bruno) he was able to powdercoat the frame and suspension, replace every nut and bolt, and perform one of the more difficult tasks of designing and building all of the hard lines for the brakes and fuel system (the former of which lead to Wilwood brakes).

"I am a detail-oriented guy and found this to be very rewarding," said Cirello. "And while the fittings and braided A/C lines were a pain in the butt, not having a single leak after the unit was charged was nice. All of the time and effort paid off."

Cirello also had the original bumpers and all of the stainless and aluminum trim straightened, polished, and/or chromed. Of course, he had a little help from his "motley crew" of pals, including Paul Garret, Gary Bland, and his dad, Bruno Sr.

Bruno (the son, not the father) gives thanks to his mom and dad for instilling a passion for hot rods, noting that they grew up as teenagers in the '50s. "I grew up in the back of a '34 Ford two-door sedan and then a '29 Model A roadster," said Bruno. "My sister and I would sit in the rumble seat listening to oldies on the way to car shows."

Speaking of rumbling, it's high time we told you about the beating heart of this Impala. Cirello and crew took out the old 350 and replaced it with a ZZ502 crate motor. The addition of Jet-coated headers, 3-inch pipes, and Flowmaster mufflers undoubtedly brings back sounds similar to those of Bruno's youth.

To handle the 500-plus horsepower of the crate motor, a 700-R4 transmission replaced the original slushbox, and a Posi-traction-equipped 3.73 rearend was fitted. At that point Bruno sold the stock motor and tranny for $500 to a friend.

With his cash flow somewhat positive, Cirello could afford to outsource some other aspects of the car, namely the body and paint and the interior.

For the paint and body, the car went to Champion Castillo. As you can see, the Silver Birch with Top Desert Sage Pearl is a winning combination. But not like Charlie Sheen winning where you lose your job and start holding machetes on rooftops, more like the winning at car shows 'cuz your paint and body is such a tasteful two-tone. This is something that the car has done at the Grand National Roadster show in L.A. Well, actually Cirello took Second Place, but that was against 48 others in the class.

There is no doubt that part of the appreciation for the car came from the impeccable interior. Cirello said it point blank of his interior guy: "Ron Mangus is the best." Designed and installed by Mangus, the cabin is replete with leather and custom chrome, not to mention the Lexus six-way power front seats. Bruno went to Nu-Relics to supply the power windows. When it's too hot for those to be down, then Vintage Air keeps Bruno and his 18-year-old son Nicholas in a comfortable climate.

Whether Bruno Cirello has made people appreciate the '61 more remains to be seen, but we definitely think it's gorgeous.