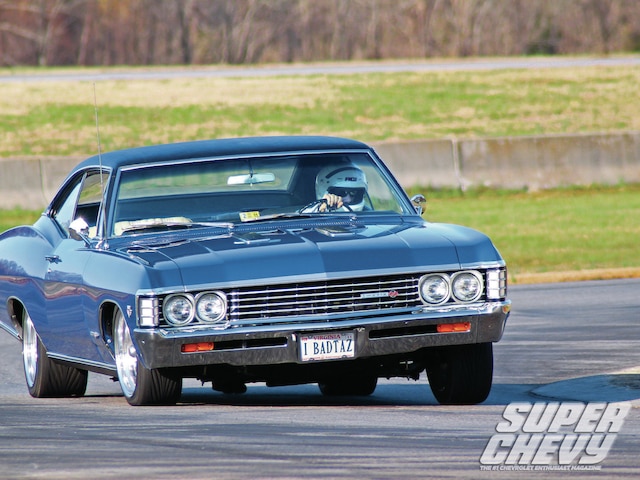 For weekend road-racers turning laps in their foreign sports cars, the sudden appearance of Buster D'Amato's '67 Impala SS running them down from behind can more than affect the way they drive. Not only do they tend to give this two-ton heavyweight plenty of braking room, but they also refrain from using intimidation to gain the preferred line going through a curve. Then they peg their tachometer on the straightaway in a vain attempt to keep up with 502 inches of Chevy power. It's the revenge of the land yachts and this story couldn't be any sweeter.

"A lot of drivers have told me that they'll see me in the rearview mirror thinking, 'Oh my gosh! What is that coming up?' " Buster says with a twinkle in his eye. "They may get around me in the corners, but I'll just blow by them. Then they feel like they'll catch back up with me in the next corner, but most of the time, I'm already gone.

"When I took it to a time-attack event, my instructor asked me to slow down because it was scaring him," Buster continued with a laugh. "This car is the biggest thing in terms of size on the track."

Buster was offered this classic Impala as payment for a paintjob he did for a customer a little over 15 years ago. The offer was hard to turn down. Not only was this the same kind of car that he had earned his driver's license in, but it was also an original Super Sport.

"It was light blue with a white vinyl top, and it had a 327 with a Powerglide in it," Buster says. "My mom had a plain Jane car like this that I learned to drive in. It wasn't perfect, but it was a good little get-around car. I drove it for two years before parking it. My plan was to do a nice restoration, so I started collecting parts for itùand that was the hardest part by far."

As it was, the car was in fine enough condition for many people. It came nicely equipped from the factory with aggressive fastback styling, air conditioning, power steering, and numerous safety improvements such as a collapsible steering column. Even so, this 327-cid, 275hp Super Sport tended to be overlooked in collector's eyes by the bigger 427 version that debuted for the first time that year.

Pulling a fullsize 4,100-lb car like this would be a load for any small-block, especially on a racetrack. Buster decided that a modern-day big-block would be the answer. When the ZZ502 crate engine with the oval-port aluminum cylinder heads became available, Buster was one of the first in line to get one. With 502 peak horsepower and 567 lb-ft of torque from 92-octane pump gas, this was just the engine combination for a classic fullsize street car.

While the new crate engine provided more than enough motivation for this Impala, Buster realized early on that he would have to upgrade other areas as well for it to be a balanced performance. Kooks Custom Headers devised an exit strategy for the exhaust that utilized 3-inch stainless steel tubing, an X-shaped crossover, and high-flow mufflers.

Mike Graham from Virginia Speed put together a Turbo TH350 automatic with a mild shift kit and an ATI 2,600-stall converter, and then replaced the stock differential with an Auburn rear with 3.42:1 gears.

Handling was substantially improved with the addition of some beefy aftermarket sway bars and KYB gas shocks. To improve the braking, a Master Power Chevy power front disc-brake kit that features oversize cross-drilled/slotted rotors was bolted to the original drum spindles. The back end features a Master Power rear drum-brake kit as well with cryogenically treated 11-inch drums.

Seventeen-inch Cragar rims shod with Goodyear F1 rubbers helped provide plenty of "stick" on both the street and road courses.

"If the ZZ572 had been available then, I would have grabbed that instead," Buster says. "Even so, we found this to be very dependable and strong. In testing, we found that putting on a Holley 750 HP picked it up two-tenths right out of the box, but we were hard on the transmission and had to go through it a couple of times to get it to last. With 28.5x15 Mickey Thompsons on the rear, the best we've gone with the car on the quarter-mile is a 12.36 at 111 mph."

The hardest aspect of this restoration project, however, didn't involve the performance upgrades at all. Instead, it was gathering together all of the little chrome and stainless steel trim pieces that aren't available as reproduction pieces. Many of the survivor cars that are still with us today have been repainted, with many of them having damaged trim parts because of sanding.

Buster had to go to the time and expense of buying four different rust buckets that still had their original paint on them in order to get the best-quality replacement trim that he could find.

He then added some custom touches of his own by spraying the car in a deep, rich blue hue that he custom-mixed from some Mercedes-Benz and Chrysler factory colors. Once the basecoat/clearcoat combination was wet-sanded and buffed, Buster added some subtle touches of his own, with a black vinyl top, solid red taillights, and a set of Camaro SS hood louvers.

"A lot of people still don't know what this car really is," Buster said with a laugh. "Then I have others who tell me about all of the memories it brings back. One of my favorites is when someone told me that the trunk is big enough for them to put six kids in it so they could all go to the drive-in movies. It seems to bring back a lot of good memories for different people."

As a versatile performer on the street, road course, or dragstrip, Buster's '67 Impala SS proves that classic heavyweights like these are still more than relevant in terms of today's performance. Long live the land yachts!

These blazing fast Impalas, a 1967 Chevy Impala with 396ci big-block and a 1968 Chevy Impala SS with a 427 rat motor, are tearing up the dragstrip. - Super Chevy Magazine

Patience and perseverence prevail over a 10 year period as Thomas Young turns a 1967 Chevrolet Impala into his ultimate streetcar. - Super Chevy Magazine