LSR Performance threw its catalog at a yellow fifth-gen Camaro; we threw it around the track, street and strip. Here’s what we discovered. 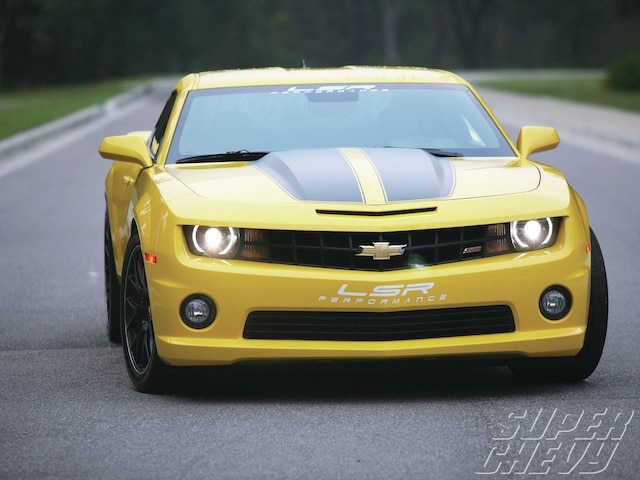 Given the wide range of parameters that Chevy must meet when it designs a new car, it's no surprise that a ton of performance gets left on the table. As hot rodders, we don't care if the ride is a little jerky, if the exhaust leaves you with a permanent ringing in your ears or if you have to fill the gas tank every 120 miles. That's the price we're usually willing to pay for maximum performance.

That's not how most of the general population views their cars, though. They want them to do everything well and don't generally care if there is a way to go around a corner pulling an extra 0.05 g--just make it comfortable and reliable. Add into account that GM sells millions of cars that have to do a multitude of different things in completely different climates and geographic regions, from Death Valley in the summer to Alaska in the winter. The tune that may net you an extra tenth at the local sea-level dragstrip might very well damage your engine if you're pulling a trailer through the Rockies. It's all about compromises, and those trade-offs typically result in very good rather than ultimate grip and go.

LSR Performance of Pompano Beach, Florida (and Valdosta, Georgia), makes and sells parts that narrow this gap between stock and all-out competition for the fifth-gen Camaro. Its goal is to offer components that improve acceleration, shifting, looks and handling without turning your expensive new car into a rough-riding, bucking beast that guzzles fuel while fouling plugs.

We spent no less than a month with an LSR-prepped Camaro SS (LS3/six-speed manual) that carried virtually every bolt-on it offers. We drove it to work and play, we throttled it at the strip and tossed it around the road course at Gainesville Raceway. We loved almost everything about it, save for the finicky aftermarket clutch and having to endure hundreds of mind-numbing Bumble Bee comments because of the eyeball-popping Transformers yellow paint. Ultimately, we discovered that LSR does an excellent job of moving the needle way closer to stellar without sacrificing comfort or drivability.

The LSR toe links are said to be 40-percent lighter than stock and thanks to their stiffer bushings prevent excessive toe deflection upon cornering and braking. Helping to fortify the chassis further are its billet floorpan brace and chromoly subframe brace.

As far as acceleration goes, the LSR Camaro had basic but effective modifications. Its cold-air kit, Kooks axle-back exhaust system and LSR-specific computer calibration put up some impressive numbers on the Dynojet in Super Chevy's Snap On Tech Center in Tampa. How does 415 rear-wheel horsepower and 415 lb-ft torque sound (SAE corrected)? That's quite an improvement over the 365-380 owners typically see stock in these cars.

To complete the mechanical package there are those gorgeous BBS wheels (20x9.5-inch front, 20x10 rear) and fat Nitto Invo tires (275/35 and 315/35) and LSR's slotted rotor upgrade. These wheels add a lot of money to the price ($2,350 sans tires), but it's definitely money well spent. The wheel/tire combo is slightly heavier than stock, but the tires are much larger. Plus, the BBS rollers absolutely transform the look of the SS. This was our first time on track with Nitto's Invo tires and we were curious to see how they'd do when pushed to the limit and beyond.

Finally, there was an Exedy multi-plate clutch and LSR Tri-Ax shifter to facilitate gear changes. The shifter was absolutely amazing, not only far superior to stock but as good or better than any new Camaro shifter we've tried from the aftermarket. Whether you were tooling around in town, throwing powershifts at the strip or upshifting and downshifting on a road course, it made finding the correct gear foolproof. It was almost like all you had to do was think of what gear you wanted and the handle was magnetically drawn to it. Less enjoyable was the Exedy clutch. All of our test drivers felt it stiff to a fault and made smooth takeoffs in traffic very difficult. It also had a propensity to chatter. Once underway, it worked well, but you have to decide if you can live with it.

On the street, the LSR Camaro was edgier than stock, but not to the point that it couldn't be a truly enjoyable daily driver. You can definitely tell all of the slop has been dialed out of the factory suspension, and most enthusiasts will revel in this. The steering remains heavy, as it is on all fifth-gen SS Camaros, probably something LSR can't do anything about, but it rewards you with better-than-stock feedback and accuracy. Hopefully, this is an area Chevy will address on future Camaros because the heaviness does wear on you on long trips.

Around town and on the highway, the performance mods never felt intrusive. The car idled like a stocker, but put your foot into it and the LS3 really came to life. The axle-back exhaust was bold and throaty under acceleration but quiet in the cockpit at cruising speeds (no resonance). It also has a nice burble when you start it, but won't disturb your neighbors too much if you have to leave the house at 6 a.m. Despite our propensity for burnouts and jackrabbit starts, we still knocked down 17 mpg in stop-and-go driving and 24 cruising at 80 on the highway.

On the road course at Gainesville Raceway, we were hampered by unusually cold weather (50 degrees and windy), and we never could seem to get enough heat in the asphalt or the Invo tires. Still, we learned a lot. The LSR Performance Camaro was way more neutral than stock, almost to the point of being loose. Yet, it remained deliciously controllable. If you watch the video of our test at superchevy.com, you can hear Senior Editor Evan Smith helping to steer the car by modulating the throttle coming out of the last turn (go to the 5:22-mark on the video). LSR has turned the F-body into a true driver's machine.

With the tires set at the factory-recommended pressure, our best lap was a 1:06.91, but the tires felt greasy. The solution was to take 4 psi out of the fronts and 3 from the rear. Instantly, our lap times plummeted, first a 1:06.41, then a 1:06.25. Based on previous testing at this facility, that's about 2 seconds faster than stock, but there's no question that the cold track was working against us. We'd also like to try the car with a switch to Nitto NT05 tires, which from experience would probably have shaved another second or two from our laps, regardless of track temperature. Props for the LSR rotors as these definitely improved our brake's resistance to fade on the tight 1.6-mile course at Gainesville.

At the strip, the Camaro was a wonderful beast. On street tires, you have to be able to walk the car out of the hole and this was made difficult by the clutch. It was tricky to walk it out cleanly off the line. Had we a set of drag radials or cheater slicks and could have gotten more aggressive or just dumped the clutch, no doubt we could have shaved a few tenths off our e.t.'s. Still, we were consistently in the low 12.5s at 113, with a best of 12.40 at 112.95. Once you were out of the hole, low elapsed times were just a couple of powershifts away. The Tri-Ax shifter/Exedy combo really came into its own at this point. Bang-bang-bang--easy as pie. Your grandma could powershift this thing. Those are impressive results for so few engine/computer mods. A set of gears and drag radials and this could be a 12-oh daily driver that knocks down over 20 mpg on the highway.

Every company is jumping on the tuner Camaro bandwagon these days, so it was nice for us to test a car that you can build yourself one step at a time as budget allows. Being horsepower junkies, we'd start with the cold-air kit and computer tune because, frankly, it takes power to move a 4,000-pound ponycar around with authority and our Dynojet and strip numbers prove they work. But we'd order the shifter at the same time because it's such an improvement over stock and you'll use it every time you drive your car. The exhaust sounds great, but at close to $1,400 it's not for the budget-conscious.

After that, it's up to you because we found that everything worked well together. This is a suspension that you can enjoy on your commute or a date and hit the autocross/open track events with on weekends.