The Cosworth Vega was a fine automobile that was doomed from the start. 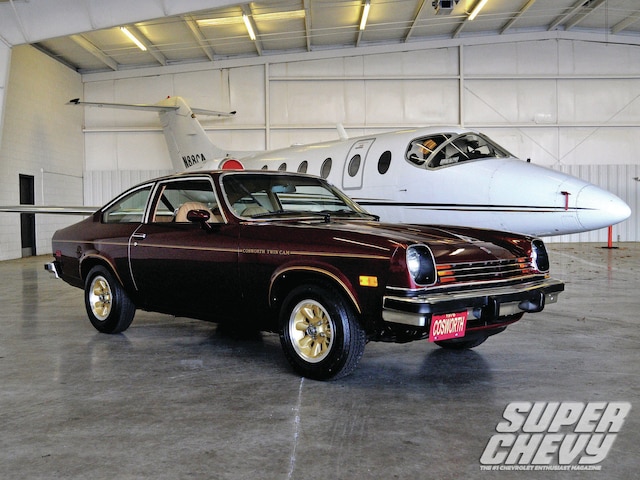 The Cosworth Vega is probably the most interesting story out of Chevrolet in the mid-'70s. Performance was at its nadir. The Camaro Z28 was axed for '75, the Corvette was using a chassis that dated to the fall of 1962 and Zora Arkus-Duntov's dream of a mid-engine replacement was about to be shot down permanently. Midsize muscle? Dead.

After the OPEC Oil Embargo of '73, performance as we knew it had changed foreverùor so we thought. The country was brought to its knees when OPEC shut off the supply of crude. The future of high-performance automobiles (or what was left of it) was going to be tape stripes and small-displacement sewing machines under the hood.

General Motors itself was in a panic, trying to stay on top of an ever-more-competitive marketplace while at the same time rushing to meet an onslaught of government regulations for vehicle emissions, safety and (later) fuel economy. Naturally, since these mandates came from government bureaucrats, they often ran counter to logic, engineering and each other.

Chevy had high hopes for the new subcompact Vega when it was introduced for the 1971 model year. Many of its styling cues mimicked the second-gen Camaro (inside and out), and it was economical, handsome in a sporty way and a very good handlerùespecially if you ordered it with the GT package. It was also priced right.

John Zachary DeLorean is credited with the idea of the Cosworth Vega. It was his attempt to duplicate the magic performed when he was an engineer at Pontiac and they stuffed a 389 into a Tempest and created the GTO. It was a bold idea -- a new kind of performance for a new era. Think about it: Stick a dual-overhead-cam 2.0-liter engine with electronic fuel injection and a high-flow exhaust header engineered by an English company known for its success in international racing circles into a small vehicle. It was a heck of a walk out on a limb, especially for the time it was introduced. Alas, it wasn't enough make the Cosworth Vega the second coming of the GTO.

For one thing, the price was astronomical -- the base was only a few hundred bucks short of a new Corvette and with options like on our feature car you were staring down the barrel of a $6,700 window sticker. This alone pretty much ensured the car would not sell in large quantities. (Chevy even ran a print ad in Motor Trend that poked fun of itself: "Cosworth, One Vega for the Price of Two.")

Worse, by the time the Cosworth model was introduced, the Vega had one of the worst records in the auto industry for reliability and it was already known as one of the all-time rust-buckets. While most of the kinks were worked out by '75, the damage had been done.

As such, the Cosworth Vega found few takers. Our feature car, a '76 Mahogany beauty with under 6,000 miles on it, is owned by Paul Chicky of South Carolina. It sat unsold until 1977, which isn't actually too bad. Another '76 he knows of didn't sell until 1979. "That"s not uncommon," according to Paul.

On the plus side, the Cosworth Vega was never really designed to be a commuter car and it quickly garnered a reputation for being a superb handler. It competed in sports car races against the likes of the BMW 2002 and was/is a competitive autocrosser. While its Cosworth-designed 110-horsepower doesn"t sound like much today, that was the equal of many V-8s of the era, including the 262-cubic-inch small-block offered in the "75 Nova and Monza 2+2. The Cosworth"s use in the featherweight compact gave it a favorable power-to-weight ratio for the time.

From a historical standpoint, the Cosworth Vega was the first Chevy to use electronic fuel injection (from Bendix) and have aluminum wheels as standard equipment (wrapped in BR70-13-inch radial tires). Paul is the fourth owner of this particular Cosworth. It has spent most of its life in a collection, is completely original except for the fuel filter, the injection seals and the fuel lines (which were cracked and replaced for safety reasons). It has only racked up 5,954 miles and as Paul notes, it still has many of its factory defects.

Want some more numbers? Only 1,446 Cosworths were produced in '76 and Paul owns two. The one you see here had such desirable options as soft ray tinted glass, color-keyed floormats, the Saginaw five-speed transmission (with overdrive), AM/FM radio and the rear seat speaker. It is estimated that fewer than 50 '76 Cosworths were built in this rich hue, making it the rarest of what owners call the colored Cosworths. With destination, it brought the total cost to a robust $6,671 (the base price was $6,065.60).

At shows, people automatically gravitate to see what's under the hood. I have been to numerous auto shows where people come up and say, 'I've heard about these but have never seen one in person.' At that point, it's always fun to give them the history of the vehicle, Paul says.

When interviewing Paul on the phone for this story, you could hear the passion in his voice for these cars, the respect he has for its engineers and fellow Cosworth enthusiasts. No, the Cosworth Vega is not an L88 Corvette or a COPO Camaro. But as GM's first modern high-tech performance car, it certainly warrants respect and admiration today.

At shows, people automatically gravitate to see what's under the hood.