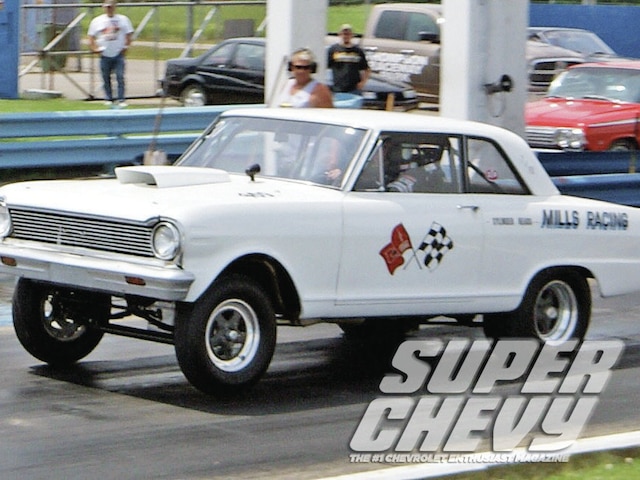 Back in 1963-'65, the Chevy drag cars a young David Mills liked best were the straight-axle Chevy IIs with monster 409s under the hood. Since then, his life has included a number of wild hot rods, including a '57 with a 427/four-speed combo, a '67 D/MP Camaro, a 10-second '62 409 Bel Air and an alcohol-injected, big-block, 7-second front-engine dragster. He surely loved them all, but since the early '90s, he has become best known for this bad boy.

Owning a head porting facility in Osseo, Michigan, he is for sure the real deal. He pretty much built the Deuce's chassis and engine himself. The heavy 409 was enlarged to 452 ci. It has a Comp Cams roller, homemade intake manifold with two 750-cfm AFB carbs, MSD ignition, self-made 2.25-inch-diameter headers and a pair of Barry Grant electric fuel pumps.

A Jerico four-speed transmission with Hurst shifter and McLeod clutch send the power back to a pair of M/T 10.5x29.5x15 slicks. An Auto Meter tach and gauges monitor the engine, while RJS belts and harness keep Mills glued to his seat.

Waaaay back in 1993, his Deuce earned a Super Chevy Editor's Choice award at U.S. 131 Dragway. He runs 9.80s at 135-plus mph like clockwork with the front wheels in the air on every run.