1965 Chevrolet Nova - Some Things Can Be Polished 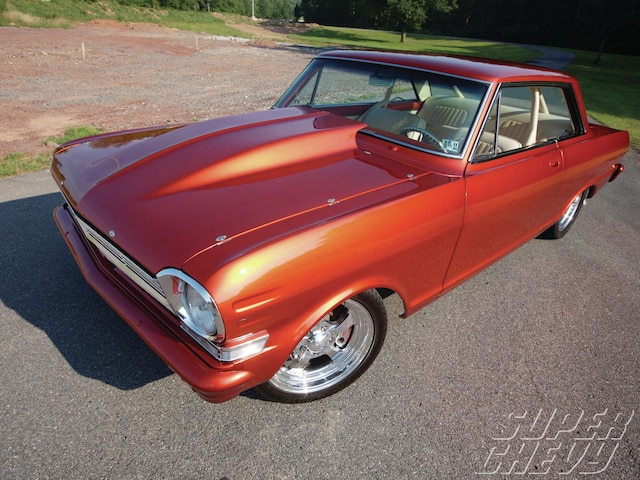 Aaron Preston had hunted long and hard to find a project he could afford. One day his dad told him about a friend who had a clapped-out race car for sale. Said Chevy was a tired ’65 Nova SS with a very unflattering nickname (the story’s title gives a clue to what it was), but though it was really ratty, it was also really fast. After some haggling, Aaron talked the price down to the 700 bucks he could afford, and the Nova went home with its new owner.

The plan was to install fresh floors, give it a general overhaul, then get the Nova back on the track. But after the new pans were in, Aaron couldn’t stop fixing things. Soon new quarter-panels were being welded in, then a Heidt’s Mustang II front suspension conversion was installed. With the new front end in place, the firewall was treated to a smoothing job. After taking a long look at the body lines, Aaron wanted those gone too, so more metal smoothing took place.

With the body just right, next it was time for a powerplant. A budget-minded 350 crate motor was bought, and after it was nestled between the Nova’s shock towers, the car was wired and plumbed. With the help of his friend Bill, Aaron spent the next five months building a custom interior for the ’65.

Even though the car wasn’t painted yet, the temptation to go cruising was too powerful, so Aaron was behind the wheel and out enjoying the open road. A lead-foot moment and a pinched vacuum line led to the blower-equipped engine turning into a hand grenade. Dreams of a Procharger F-2 were dancing in Aaron’s mind, so the new engine would need to be plenty strong. Engine builder Andy Jensen put together a new 406-inch Mouse using a Motown block, Dart alloy heads, JE pistons, and a Callies crank. Comp Cams supplied the valvetrain including a solid roller bumpstick.

Induction after the F-2 is handled by an Edelbrock RPM Performer intake topped with a Holley 850 cfm fuel/air mixer. The whole package is estimated to make about 750 hp on pump gas. So far, the Nova has gone 10.83 in the quarter, with Aaron shutting it down at about 800 feet.

Backing the blown small-block up is a Turbo 400 built by Bill Worley with a reverse valve body and 3,500 rpm stall converter. A custom driveshaft from Inland Empire Driveline sends power to a Mopar 8-inch rear with 3.55 gears and a Detroit Locker limited-slip unit. The car was back halved, with a ladder bars suspension employed and QA1 coilovers providing some cushion. To make sure there’s plenty of stopping power, Baer brakes with aluminum calipers are at all four corners. Rolling stock are Billet Specialties 17-inch wheels, with BFGoodrich rubber up front, and Hoosier drag radials out back.

Once the beefier engine was installed, the Nova went to the body shop for final panel straightening and paint. Spraying the car’s custom House of Kolor coppery orange hue took an extra long time because it was painted in Ronald Ewanick’s one-car garage. Ron was painting the car in his spare time, and his attention to detail resulted in a paintjob with a mirror-like finish.

Bill Weidemoyer, with Aaron’s help, stitched up a custom leather and suede interior. Highlighting the fabrics are Auto Meter Ultra Lite gauges, Billet Specialties steering wheel, and B&M shifter for unleashing the beast as it were. All the speakers for the Alpine stereo systems were hidden to give the rollcagesurrounded interior an uncluttered look.

One of Aaron’s biggest pleasures with the Nova is taking his dad out for cruises, and with over 700 hp, he probably enjoys being able to give his dad some new gray hairs, too.