Yes, They Did Build Injected '59 Impalas, But This Isn't One Of 'Em. 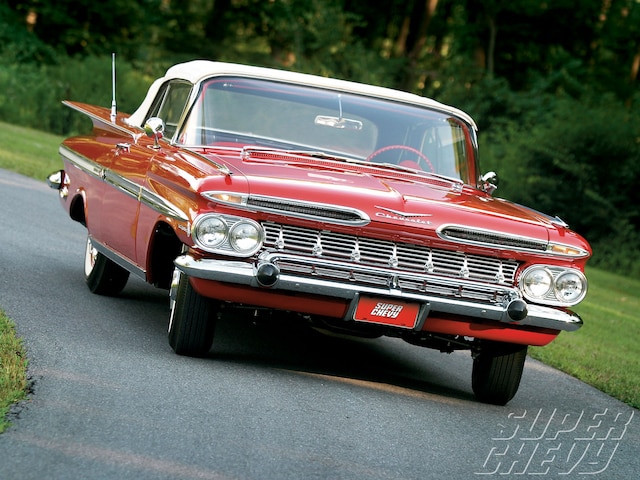 The year 1959 was a pivotal one in the history of General Motors. Under development were its first compacts (the Corvair, Tempest, F-85 and Special), but before they'd arrive to take on VW and the other imports came the most radically redesigned models since, well, probably ever.

The '59s would be the last models styled under the reign of legendary design chief Harley Earl. The '58s were radically different, larger and more bulbous than the '57s, and Earl wanted to continue down this path. But the stylists under him had seen the future and a mini revolt took place in the palace. In their crystal ball was the Forward Look Plymouths, which the GM designers caught a sneak peak of. The Mopars were lower, longer and wider, and after a hard-fought battle in '57 (perhaps the only one he ever lost), Earl's underlings convinced him this was the direction GM needed to go.

What came out of this were some of the wildest, most completely different automobiles ever, including the '59 Chevy. It outdid the competition in the longer, lower, wider department and if the '59 Cadillac had the freakiest, tallest tailfins, the Chevy had what looked like gull wings from behind. Today, many people refer to the '59s (and the slightly more subdued '60s) as the batwing cars. Under these wide fins were bright red cat's eyes for taillights, a one-year-only feature.

Up front, the turn signals were mounted above the quad headlights and the grille was as wide as a football field. Wraparound glass ensured blind spot-free driving, though it hindered front seat entry for women wearing dresses. For years, urban legend had it that these fins would cause the cars to take off at speed, lifting from the rear if the wind was strong enough. Forget the fact that Junior Johnson won the Daytona 500 in 1960 with a '59 Chevy at an average speed of just under 125 mph and it never flew. Later aerodynamic testing proved quite the opposite-the '59 was a pretty slick design, especially for its time.

Under the hood, you had your choice of six- and eight-cylinder mills, the latter in either small-block (283) or big-block (348) configuration. As wonderful as the mouse motor was, people often wanted the 348 for its extra torque-how else could you get one of these gigantic sleds moving? Still, there was an option available for those who needed something completely different and had the bucks to pay for it: Fuel injection.

Introduced in '57, the injected 283 with high compression and a solid-lifter cam was heralded for its ability to produce one-horsepower-per-cubic-inch, a first in a lower-priced car. Few wanted to pay for the pleasure, however, and except for in the Corvette it never caught on with buyers. It was expensive ($550 in '57), few knew how to work on it, and more power and torque could be had by stepping up to a cheaper, simpler 348. Passenger car production declined to about 140 fuelies for '59, the last year it was offered in a full-size model. It soldiered on in the Corvette until '65 and became legendary on the street and in song ("Shut Down" by the Beach Boys).

Scott Chalk, a restoration shop owner from Maryland, owns the car you see before you. His father purchased it in 1976 with a mere 7,000 ticks on the clock and restored it two years later. But it was Scott who rebuilt it a second time in 2009. No, it's not a genuine, fuel-injected '59 Impala convertible, but Scott built the most faithful recreation of one you'll ever come across.

"It was a very long and hard search to find the parts specific to the '59 fuel injected cars," Scott told us. "This includes one-year-only front fender emblems, air cleaner adapter, air cleaner mounting hardware, and of course, the correct Rochester FI unit for the 290hp 283."

Ultimately, it took him two years to find the correct model year parts and another 10 months to correctly convert the ragtop to look like a factory fuel-injected, four-speed Impala. So authentic is the recreation that even the nut that holds the airbox on behind the grille is correct. You think that was difficult to come by?

Scott, who owns Scott's Performance & Restoration in Pasadena, Maryland, rebuilt the original 283 himself, boring it 0.030-inch over and keeping it real with a reproduction solid-lifter Duntov cam from Lunati. A Cloys double roller timing chain and Melling high-volume oil pump are the only real deviations from stock. The exhaust manifolds and distributor are factory and there's even an NOS A/C Delco air filter underhood.

A 1959 Borg-Warner T-10 assembled by the owner backs the 283 and sends the 290 hp to an 8.2-inch GM rear with 3.70 gears. The suspension, likewise, is completely stock all around, as are the brakes. Tires are BFGoodrich Silvertown models, size 14x8 at each corner.

Don't go looking for a high-end sound system, unless you consider the stock AM radio fancy. The carpeting is reproduction, but the rest of the interior is a sea of 100 percent original, factory issue materials-yes, the car was that good when his father found it. The only non-stock item in here is a Hurst Competition Plus shifter moved by the factory handle.

Bobby Johns sprayed on the spectacular Dupont Roman Red lacquer, which is offset by miles of chrome and stainless trim (the chrome refinished by Keystone of Baltimore).

When Scott's father bought the '59, it was a 283 Power Pack car with a three-speed manual trans. The son's fondest memories as a young boy are riding around with his dad behind the wheel. It was this very car in which the baby Scott was brought home from the hospital. His parents enjoyed the sleek convertible for decades before deciding to give it to their son when he turned 25.

He's happy to report that the Impala runs beautifully and drives like new. The secret to the mechanical fuel injection, he says, is simply finding someone who understands it and can tune it properly. This 283 fires instantly and has been quite dependable, according to the owner.

While it may not have been the most popular option in '59 (supposedly fewer than 1,000 full-size fuelies were made in three years of production), fuel injection makes an already unusual car that much more interesting-even if it was added 48 years after the fact.

The pimpmobile is reemerging with this 1959 Chevrolet Impala. Check out all the modifications and power that Pimpala has!