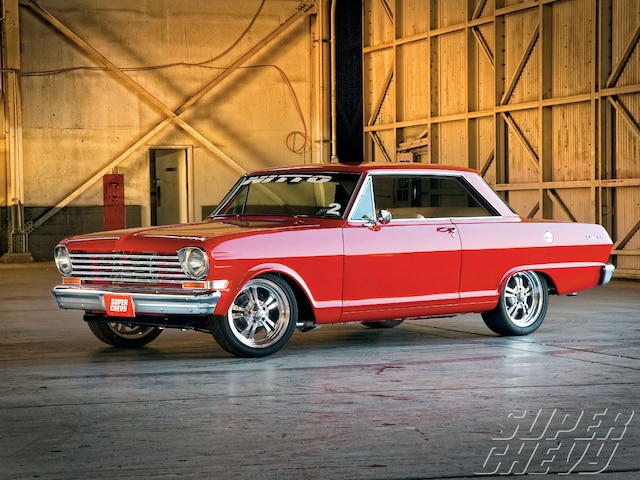 Talk to a car guy about bolt-ons and he'll know you're not referring to pectoral improvements for the female of the species. When it comes to parts, it's been a long-raging debate what's better: bolt-ons versus full replacement. This subject gets particularly dicey when it comes to early Novas. Known for, quite frankly, a dreadfully poor stock front suspension, early Novas have the most to gain in handling improvements out of their other Chevy brethren. Usually gearheads opt for the full replacement for the Nova's lackluster front subframe and suspension, but the aftermarket has embraced enthusiasts who don't want to modify their Deuces that heavily.

Bill Kress was in a quandary. He wanted to improve the handling of his '63 Nova SS, but didn't want to have his car down for the time it would take to install a full front clip. Several conversations with Chuck Church at Church Boys Racing had Bill convinced bolt-on was the way to go. Church Boys was already very well-known for its bolt-on rack-and-pinion steering conversion for early Novas, and its expanded line of bolt-on '62-67 Nova parts includes tubular control arms, sway bars, K-members, and a slew of rear suspension parts to get any early Nova handling like a Corvette.

After installing all the necessary parts, Bill was ecstatic about the improved corner-carving ability of his '63. When Chuck approached him about using the Nova in our 2010 Handling Challenge, Bill leapt at the opportunity. With Chuck's suggestions, Bill added Church Boys improved 5 1/2 leaf springs and Varishock coilovers up front, along with some electrical and wiring upgrades. The Nova's 383 mouse was checked over, along with the TH350 trans, to make sure they were up to the task.

Driver's Impression - On the Autocross Course
Church Boys Racing is well known for Chevy II and Nova handling parts, and this one sported my favorite engine, a 383 SBC. But with front disc/rear drum brakes, and a slush box trans, it was sort of like bringing a knife to a gunfight. Still, no worries here. The car had an accelerator and brake pedal, a steering wheel, and could go, stop, and turn ... right? Unfortunately, the Nova sported manual steering. For me, this posed a big problem since I didn't eat my Wheaties that morning and as this was clearly going to be the most difficult drive of the day, I saved it for last. For this I'm glad, as after my runs my arms were toast.

Strapping myself into the driver's seat, I looked down the course and mentally willed myself to plan my turns, never let go of the steering wheel, and shuffle steer like mad. Grabbing that wheel, I matted the pedal and threw the Nova into the first left-hander and from there, into the slalom. Thankfully, the steering ratio was relatively quick and I got through this section pretty good. The Nova could be steered about, but if I got a bit over-exuberant with the throttle and got into oversteer, with no power assist any countersteer correction couldn't happen fast enough. I had to be extremely precise and when done textbook right, the car rewarded me well.

I really liked the way the Nova could lay down power from the crossover to the end turnaround and then back to the sweepers. The brakes got the car slowed in a hurry and early hand position prepared for late apexes that were the mainstay of my return path. I also found out I had the ability to slide the car around a bit which gave me proper placement for corner exit. The tight turns before the finish were very hard to thread through and my times showed a ton of it was left on the tarmac. With power assist, this car could be incredible on any autocross course as it was extremely well balanced and went where pointed. Tons of positives here.

With additional horsepower or big-block weight, this car would have been quite a handful. The 383 small-block delivers the pill wonderfully. In my perfect world, an aluminum LS-anything would have lightened the front end even more and helped with turning. I also loved the brakes and when used, they balanced this car well; you'd never know the rears weren't discs. And thank you to Church Boys for not having one of those small "designer" steering wheels, as the 15-incher was perfect.-Mary Pozzi

Driver's Impression - On the Street
I'm a big fan of first-gen Chevy IIs. I love the styling and I'm happy to see that they're becoming more and more popular with the faithful. I couldn't wait to see how the Church Boys Racing mods made this one behave.

When I took it out for its street drive, the CBR crew still had the shocks set on "kill" for the timed events. As you can imagine, this didn't help its street manners. It was all kinds of harsh and jittery. Once we (myself and car owner Bill Kress) realized what was up, I promised I'd give it another shot once we returned to the pits and the crew could set the suspension to its everyday settings. The difference was readily apparent the first time I hit a crack in the road. It was a completely different car and the smile returned to my face.

I'm not an opponent of manual steering. The Nova's offered terrific feel, instantaneous response, and there was no play in it. I'd have gone with a slightly bigger steering wheel to get more leverage when turning. The brakes were also of the manual variety and I thought, like the steering, they worked just fine. We ranked them as "very good" in the log book.

Ultimately, the Church Boys Racing stuff proved its worth, both on the street and at in the timed events. Really, 0.88g on the skidpad from a '63 Nova? Ha! That's getting with it, especially considering the pleasant street manners once the suspension was dialed back. This is a truly fun, slick little toy, one that offers excellent value for the suspension dollars spent.-Jim Campisano