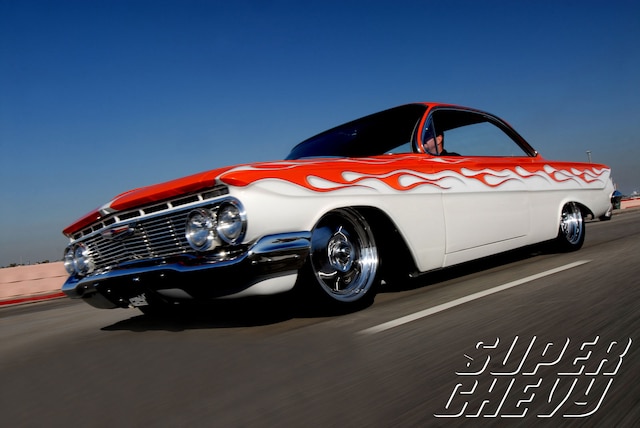 Rick Abate wanted something unique and different. This is a difficult goal, but one made easier with the '61 Impala. While great looking, the '61s have never achieved the popularity of their '62-63 brothers. So, while the more popular Impalas are the first choice of most, those looking to stand apart from the crowd often find love behind the wheel of a '61.

Rick found his Impala for sale online in Alabama. After a local hot rod shop was hired to check the car out and gave it the thumbs up, he bought it without seeing it in person. An anxious three weeks later, Rick returned home from a business trip to find his "new" Impala waiting in the garage. The next day in full light he saw the true condition of the car, and that's when the trapdoor underneath him fell open.

The Impala seemed to be crabbing, with Rick working hard just to keep the car going straight when driving. A visit to the local front end shop told the tale, everything in the front end was found to be worn out and in need of replacing. A few months after that, the 383 stroker in the car went off like a hand grenade and busted two pistons. Not to be left out of the party, the rear end and transmission were also in similar mechanical distress. The fenders on the Impala were badly out of alignment, and the interior was shot. Topping it all off was the paint on the lower portion of the car was not the best and needed work.

Not to be deterred, Rick set forth on a six-year project to right all the wrongs with his Impala. In his own words "I got really good at spending money with this car."

The junk 383 was replaced with a modified GM Performance Parts ZZ383 crate engine set up by RC Performance in Huntington Beach, California, and backed by a worked TH350 trans. The factory rear was fully rebuilt by Scared Shiftless in Santa Ana with a Posi unit and 3.25 gears, and the factory driveshaft was replaced with an Inland Empire two-piece, slip yoke unit with spun aluminum carrier and urethane bearing.

Up front, the factory suspension was fully rebuilt, then a CPP front disc brake conversion was installed along with CPP 11/8-inch front and 1-inch rear sway bay kit. The factory steering box was pulled in favor of a late model Saginaw 605 box, and Ride Tech air springs and KYB double actuated gas shocks were installed at all four corners. Finishing everything up are a set of American Hoopster wheels wrapped in Nitto 555 tires, 18x8s front and 20x9.5s rear.

For the body, Rick took the car to Autobahn in Costa Mesa to get all the panels realigned, then resprayed so everything matched up properly. The House of Kolor Tangelo Pearl Orange paint on top of the car was good except for one fender that had to be redone, but the lower half of the car and anywhere else that was white had to be repainted completely in House of Kolor Standard White. All the body panels were realigned and fitted properly and the bumpers and grille, painted by the previous owner, were stripped and chromed to add extra shine. On the inside, the car's interior was refurbished by Sergio at Orange Auto Upholstery in Orange, California, with leather coverings for the seats and door panels, one-piece headliner, and fresh carpet. A Panasonic single-disc CD player/stereo handles the cruising tunes.

For Rick, this car's never truly finished. His goal is to perform some sort of major upgrade or change to the car every year. Future plans call for a 9-inch rear to replace the factory unit, and as of this publishing the factory gauges have already been replaced with aftermarket units.