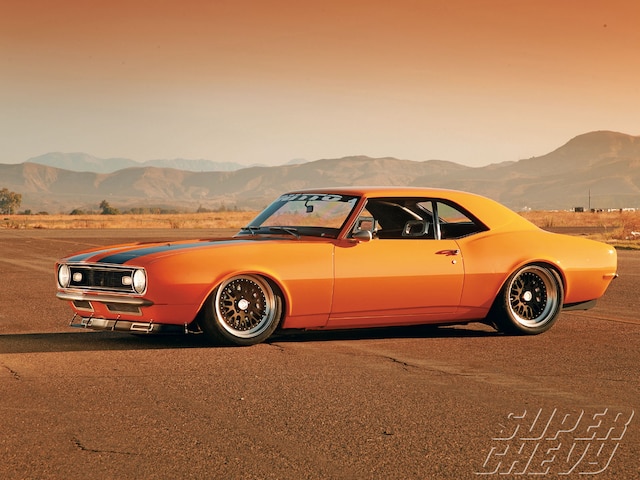 It's hard to believe this Velocity Mandarin Orange screamer started out life as a lowly six-cylinder Camaro. Funny thing is, that's what usually happens to cars that cross paths with Bret Voelkel, owner of Ridetech (alias Air Ride Technologies). They don't stay stock for long, though they do get lower.

Once the car was in Jasper, Indiana, where Bret's fabrication business, Precision Coachworks, is located, the transformation from mundane to insane quickly began. The old six-cylinder and trans were yanked out in favor of a World Products LS7X engine pumping out 614 hp and 575 lb-ft of torque and a ZF six-speed transmission with a Ram clutch.

After Precision Coachworks finished up with the body of the car, it added the little billet touches, custom made splitter, rear air diffuser, and all the other widgets and screens you see on the car. Some of the products the shop came up with are now being worked on and considered for production and eventual sale.

With the appearance set, it was time to give the car what any Ridetech vehicle is known for: improved handling. A complete Air Ride Street Challenge package was installed. The front system consists of its StrongArm, double-adjustable ShockWaves, Musclebar sway bar with PosiLinks, and billet tie rod adjusters. The rear is outfitted with Bret's AirBar and matching double-adjustable ShockWaves. Controlling the air springs is his 4100 series AirPod and LevelPro systems.

To help Bret juke and jive his way around the track, there's a 12.7:1 Detroit Speed steering box mated to a Turn One-prepped power steering box. In order to fit the massive 335/30R18 BFG KDs out back, Precision Coachworks also installed a set of Detroit Speed mini tubs. Putting a halt to it all is a set of binders from Wilwood. With six-piston calipers coupled to 13-inch rotors in the front and 12-inch rotors with four-piston calipers in the rear, the Camaro has more than its share of stopping power. Finishing off ride functionality and providing some very stylish form is a set of three-piece CCW Classic rims: 18x8-inches front, and 18x11-inches out back.

On the inside of the car, Bret had his crew hit the CNC machines once again and go billet crazy on the interior. To make sure no electrical gremlins popped up, a new American Autowire harness was installed, and for safety the prototype of Ridetech's new bolt-in TigerCage was installed. RacePak gauges in an IQ3 panel keep tabs on the LS engine, and interior panels from Marquez Design, Flaming River steering column, Modo Innovations pedal covers, and Corsa steering wheel finish off the interior.

During the event, the Camaro wasn't really performing up to expectations, leaving Bret and his crew scratching their heads. The brakes went south and the engine developed a miss. Once back home, the Ridetech team spent over 100 hours going over the car making adjustments to get the car tuned just right (among other things, a faulty brake proportioning valve was discovered). At a recent autocross event, the car came in third out of 80 entries, so don't let the numbers here fool you-just because this car doesn't have conventional springs, doesn't mean it can't handle.

Driver's Impression - On the Autocross Course

After seeing the hot tangerine with brushed metal stripes Ridetech "Velocity" Camaro at SEMA last year, I've got a huge appreciation for this car and the build. Velocity definitely looked ready for some serious work and I was ready for just another day in paradise. What's cool about the car is that with the exception of the steering wheel, most everything fit ... at 5-foot-7, the seat position, gauges, pedal assembly were all good. The designer, flat-bottom steering wheel was quite small and made turns somewhat difficult for me. My ideal wheel is 15 inches, as this diameter allows the driver to use shoulders instead of elbows and forearms with relation to body mechanics.

The steering response on this car was quick ... too quick for my liking. What seemed like an inch of steering wheel rotation produced monster direction changes. On my first timed run, Velocity felt nervous and darty through the initial slalom section, but was able to recover without loss of control. I didn't like having to counter-steer, or turn back, after the initial turn-in as this cost time. Each run gave me opportunity to learn this car and its nuances, and the slalom ended up being quite good by the fourth and fifth runs.

An intermittent engine miss during the first third of each run made for some interesting handling on the autocross, as each hiccup seemed to occur just as I approached an apex. The front end would start to push; the engine would catch again and then I'd have to deal with oversteer. The miss now gone, the end sweeper was intended to see each car's attitude over the center rise and the Camaro did exactly what it was supposed to ... it initially stayed on line for corner entry, handled the rise, and then allowed me to slowly compress the go-pedal to power out of the element. I carried a lot of speed back through the crossover and into the left hander starting the transitions back to the finish, which, while loads of fun and giggles, really sucked because the brakes went on hiatus. And I really needed those stoppers now! Each brake application took two or three pumps-the first to replenish the system and the second or third to apply pressure. The delay definitely cost time as I braked way before I should have needed to so the Camaro would be at the correct speed for the next element. Get the engine miss and brakes sorted and Velocity will be a solid contender for any autocross.

Power was linear and Velocity just kept doling it out. Overall, I liked this car. Minus the brake issue, it was comfortable to drive and offered good feedback. You can move the car around at speed, even toss it a bit, and not get bit which is what you want for a good street ride. Plus the complete adjustability of the AirRide suspension allows for any height, spring rate, ride quality, or combination thereof.-Mary Pozzi

Driver's Impression - On the Street Velocity is one of the best-looking '68 Camaros I've ever laid my pretty brown eyes on so I couldn't wait to get it on the street. If it drove half as good as it looked, we'd have a heckuva car on our hands. Let me tell you, it did not disappoint.

On the inside, the seats were both comfortable and supportive, the Racepak gauge cluster was directly in my line of sight and (contrary to what Mary said) I loved the three-spoke steering wheel. Of course, I didn't have to throw the F-bod around a bunch of cones so I can only vouch for its functionality on the street. On the road, I loved the way it felt in my hands. I do agree with Mary that the steering itself was too quick.

The brakes felt poor on surface streets, with too much pedal travel. You really had to apply a lot of pressure for them to react. Now we know the culprit was a bad proportioning valve.

There's precious little I'd change here. The gearbox shifted effortlessly, with the shifter precisely gliding into every gear. The harder you threw the lever, the better it felt. Throttle response was knock-you-into-the-backseat instantaneous, but this story is more about the suspension and it worked wonderfully. It struck a good balance between firm and comfortable. It was very controllable and the suspension was compliant, allowing those big tires the opportunity to do their job.-Jim Campisano