Smokey Yunick Parts Are Under the Hood of This 15,000-Mile Unrestored 1969 Chevrolet Camaro Z/28 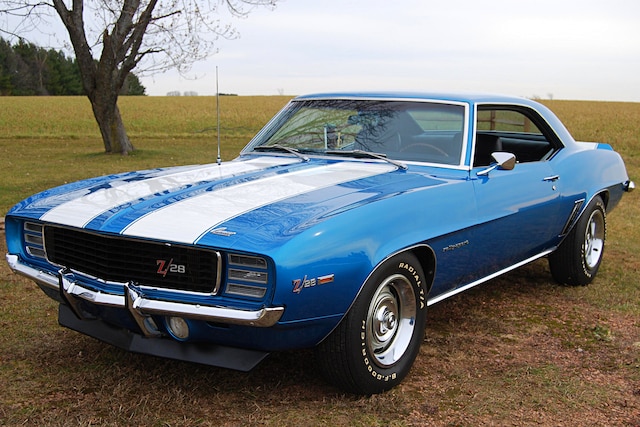 Guy Carpenter was a 19-year-old car nut back in 1967. He read all the car magazines he could afford, was a big racing fan, and spent a lot of his free time hanging out at the local Chevy dealership, Wheeler Chevrolet. Everyone who worked there knew that the kid loved cars and really knew his Chevrolets.

Carpenter told the salesmen that he was saving up to buy something way better than a used car. He wanted a 1969 Corvette with a 427 engine, Chevrolet's ultimate high-performance car.

His dreams were dashed, though, after a heart-to-heart discussion with his father. Dad told him to talk to the family's insurance agent, who in turn told him that coverage on a 427 Corvette was going to run $1,000 a year. But since Guy knew a lot about cars—Chevys in particular—he had a trick up his sleeve: He would buy a Camaro Z/28 with a hot 302 V-8, and they'll think it's only a grocery getter, he reasoned.

By this time it is 1968. Guy started looking for a current-year Camaro, but it had to be just what he wanted, a Le Mans Blue Z/28 without a radio. He was interested in performance parts, but not in comfort and convenience options. He wanted racing stuff and the Rally Sport package, but didn't want frills that added weight.

Guy's uncle in southern Wisconsin found him a 1968 Z/28 RS that was Le Mans Blue with white stripes, and it had the optional Sport steering wheel that Guy liked. The car was everything he wanted except it had a radio and the optional Custom interior. Unfortunately, Guy discovered he didn't have as much money as he thought, but he was also bothered that the Camaro wasn't exactly the car he wanted. Today he is happy he passed on the 1968 Camaro because Wheeler Chevrolet received advance information on 1969 Camaros just at that time.

Guy was invited to sit in on the dealership's training program to learn about the upcoming Chevrolets. When he saw the 1969 Camaro Z/28 with Rally Sport equipment, he knew that was the car. He sat down with a salesman and put a Z/28 on paper with the things he wanted: M22 gearbox, four-wheel disc brakes, Rosewood steering wheel, and Rally Sport package. He waited patiently for the first date that Chevrolet would accept orders at the Zone, but his order bounced back because the four-wheel discs were delayed. That happened a second time, and a third. Finally, in December 1968, the order was confirmed and the car he wanted was set up for a January 1969 build.

With more than a month to go before he got the car, Guy buried himself in his favorite car magazines. That included the July issue of Car and Driver and an article about the muscular ponycars he had seen in the Trans-Am races at Road America. Among the cars in the article was a cross-ram Z/28 that just about blew Guy's mind.

The Le Mans Blue Z/28 with four-wheel disc brakes finally arrived in late January. It was snowing the day the transporter showed up at Wheeler Chevrolet. Guy has pictures of signing the ownership papers with a salesman named Al Burris and Daniel Wheeler, who owned the dealership at the time. He has pictures of him and his Z/28 in the snow. And that may have been the only time the car ever saw snow. Unlike most teenagers, who would be dying to drive their new Camaro, he decided to store the car until spring.

While the car wasn't being used, Guy removed all the smog gear and replaced the factory exhaust manifolds with a set of tuned headers. Of course, he saved the parts he took off because he knew he was going to keep the car forever. When spring arrived, Guy was ready for six or seven months of driving fun.

The Z/28 wasn't the kind of car you hopped in to drive to school or the corner store. He found that it wasn't really warmed up unless he went 40 to 50 miles from home. He said that the Z/28 loved highways and hated towns. Low-speed driving would foul the spark plugs pretty quickly. Guy would generally pick out a destination—a town an hour away—hit the scene, and make it back the same evening.

Every Friday morning, Guy took the car to a certain mechanic at Wheeler Chevrolet to make sure it was perfectly tuned for an evening of cruising and careful street racing. He blew the doors off of a lot of other muscle cars in Central Wisconsin. But he never beat the car. He just used it for the things it was really made for. His exceptional treatment of the car was pretty unusual, especially for a teenager.

On weekends, Guy would drive to Wisconsin International Raceway in Kaukana to watch the drag races, or he would go a bit farther to watch the sports car races at Road America. He made trips to visit his uncle in Janesville and his brother in Illinois. The car spent a lot of time driving up north to a buddy's cabin near Minocqua, Wisconsin. Before long, the odometer read 15,000 miles.

Now, here's the kicker. Today, 48 years later, the car has just under 16,000 miles on the clock! It is still in pretty much perfect condition, with the exception of a door ding or two. It is not, however, just like it came from the factory, and that's the rest of the story.

After removing the antipollution hardware and adding headers back then, Guy's plan was to keep the car factory stock for a while, then turn it into the kind of Trans-Am Camaro that Car and Driver had featured. Having hung around the dealership for so long, Guy was familiar with the Green Sheets that could be used to order Service Components similar to those on racing cars. These parts included a cross-ram conversion, optional front and rear sway bars, a heavy-duty cooling system, an engine oil cooler, transistor ignition, and more.

Unfortunately, Uncle Sam threw a wrench into this scheme. Guy was drafted. The car was put into dry storage until he was mustered out of the Army in 1971. By that time, the age of the true muscle car was just about over and the Green Sheets parts were "unobtanium." Guy did have Wheeler Chevrolet check the part numbers and get him what was available. He was able to buy special front brake calipers and rotors, a disc brake rear axle, a base plate for the air cleaner assembly, a couple of fuel lines (the cross-ram setup has many), a gasket, and miscellaneous stuff.

Yet he was still missing the all-important cross-ram manifold. While he looked for the missing parts, time marched on. It wasn't until 1978 that he hit pay dirt after spotting a classified ad in Hemmings. The ad was actually for a complete hemi-head 302 racing motor. This was an engine developed by Chevy that never got used. The seller, who was from Kansas City, had purchased it among other parts from Smokey Yunick's garage. The price for the motor was too high, but the man said he also had a complete cross-ram setup for the 1968-1969 Trans-Am Camaro from wing nut to engine gasket.

The special intake and related parts were also expensive, but Guy scraped up enough to buy the stuff. Once he had the parts, the car was taken apart and put back together following instructions in the mimeographed Green Sheets. These basically gave Guy all the information that Chevy engineers had learned over the years: what spring rates to use, what front sway bar to use, what the rear sway bar had to be to compensate for the front bar and balance the car.

After the Z/28 was converted to a Service Component car, it was no longer suitable for everyday street driving. The competition metallic brakes have to be warmed up before they will really stop the car. The full-race Second Design cam and valvetrain are lumpy. The cross-ram is really strictly for racing. The twin 600 carbs have no chokes, so it's a bear to start the car. All this is part of the reason it has gone only 140 miles since the Service Component conversion was done at 15,552 miles. Guy drives it once in a while on long trips. "I enjoy the car," he tells us, "but it's not something I use like I did originally."

Guy keeps the Camaro in very good condition. The interior is like new. "I enjoyed the car and I drove it fast," he admits. "But if people rode with me, I gave them specific instructions on how to get in and out of the car. I told them not to drag their feet on the sill plates, not to scuff the door panels, and never to kick a kick panel. I told them we were going to be going very fast and they shouldn't flail all over the car. I told them to grab onto their legs, but not to claw the car up."

Today the Camaro sits in Guy's garage alongside an Elkhart Green 1973 Corvette, a restored Triumph TR4A, a Volvo racing car, a Corvair, and an early Excalibur. Everything that he owns has something special about it, and his Camaro is no exception. It's his teenage idol car, and it makes him feel like a teenager again when he climbs inside, gets it started, and listens to the engine roar.

Guy Carpenter thinks the Le Mans Blue paint on his Camaro has faded since he bought it new, but we see no evidence of any fading. Maybe a door ding or two, but that will happen during nearly 50 years of ownership.

The 302 V-8 is original to the car, but Guy added the cross-ram intake system in 1978, after buying the setup from a collector who had purchased parts and engines from Smokey Yunick.

The setup of the dual-quad 600-cfm carbs requires this special air cleaner. Note the headers; Guy added them before he even started driving the car.

Guy was particular about the options he ordered on his Camaro, more interested in performance parts than convenience features. He did like, and got, the Rosewood-rimmed Sport steering wheel.

Remember, this is an unrestored original interior. It is clich to say, but the back seat literally looks like no one has ever sat on it.

Guy had driven the Z/28 just over 15,000 miles before he started the conversion to Trans-Am parts. The modifications made the Camaro harder to live with on the street, so mileage since then has accumulated very slowly.

This is the Car and Driver article that inspired a teenaged Guy Carpenter to convert his Z/28 to near full-race spec.