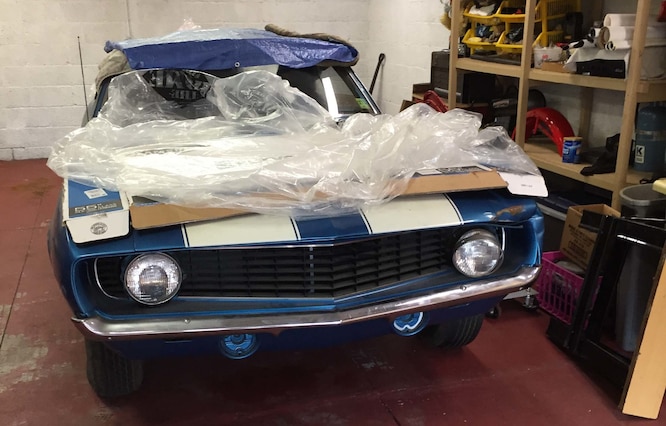 After 20 years trying to buy Donnie Detzel's 1969 Z/28, Ralph Bizzarro finally heard the words he wanted to hear: "Are you ready to buy my Camaro?"

Donnie health wasn't doing well healthwise. He figured he "might as well take the money and run. It's not going to do me any good dead." Donnie also knew that Ralphie (as he called him) was "meticulous and would take really good care" of his car.

Nonetheless, Ralph was in shock when he got the news. He said, "It just came out of the clear blue and hit me like a ton of bricks. I took off work the next day and went over and bought the car."

Although the engine was out of the Camaro, the 302 small-block had matching numbers. The Z/28 was apart, but included many OE parts. What made this deal so sweet for Ralph was that the car was all there and had not even been on the road since 1976. He also liked that the muscle Chevy had been right there in Erie, Pennsylvania, its whole life, purchased new at Dailey Chevrolet.

Donnie bought the Z/28 in 1970 under unusual circumstances while he was still in high school. "I was driving my Corvette [down a neighborhood street], and I saw the back end of a Camaro and noticed Z/28 emblems. I spiked on the brakes."

Donnie thought the people in the house were having a party. He knocked on the door and asked if the Z/28 was for sale. He was taken aback to discover parents holding a wake for their son who had been killed in Vietnam. Donnie apologized for his intrusion and said he could come back later. The father, however, actually wanted the car sold. Donnie believes the fallen soldier's mom was distraught over her son's long wait to get his dream ride and then not having much of a chance to drive it. Apparently they would as soon sell the car as leave it sit there.

Donnie bought the low-mileage Z/28 for $1,200, which he remembers as a "homerun" even in those days. He dug up an old photo of the car from 1970, taken not long after he bought it, sitting in his driveway in Erie.

"It was a plain Jane Camaro. No bumper guards, no wheelwell moldings, no nothing. A plain stock, fast-as-hell [Z/28], not even with Rally wheels, just hubcaps."

Why did Donnie park such a fun ride in 1976? For the answer, the 61-year old drifted back to his high school days. He graduated in 1973 and went to work as a welder for GE. He recalled an Officer Wilcox.

"Back in the 1970s you weren't allowed to do nothing to your car. You couldn't change the exhausts. You couldn't do nothing. Well, back then Hooker made these really neat headers that dumped out the side of the front wheels and went into a big 4-inch pipe. But that cop used to pull me over every day and hit me with a $150 fine. And I had to get to work."

Frustrated, Donnie threw the headers and pipes in a "big, deep hole" he dug in his mom's backyard, pulled the engine, and parked the Z/28 in his garage. The inspection sticker reveals 1976 was when he last registered the car.

Donnie says later the cops in the area "dropped all that," referring to tickets for certain modifications, including side pipes, some underhood upgrades, and wider wheels that "stuck out," Donnie recalls. But he still let the car sit. He did continue to stock up on OE parts for both his Z/28 and his 1966 "four-and-a-quarter horse" Corvette.

Ralph is having fun with his new toy, which he plans to put back exactly as delivered brand new.

Donnie Detzel photographed the 1969 Camaro Z/28 in his driveway not long after buying it in 1970.

Another vintage photo dates to May 1976, after Donnie parked the Z/28, pulled the motor, and put the car on jackstands.

After buying his friend's Camaro, Ralph Bizzarro highlighted the stampings on the block with white chalk to help show the digits (530506) that match the last six digits of the VIN.

Ralph took this photo of the stamping located on a pad on the passenger side of the block near the cylinder head. The V1022DZ decodes as follows. V is the engine plant (Flint, Michigan); 10 is the tenth month (October) of 1968; 22 is the 22nd day of said month; DZ is the engine code suffix for the 302 unique to the Z/28.

Information on the trim tag can be used to document the factory equipment on Camaros. Starting from top left: ST is the body style code; 12437 means this is a Camaro coupe. NOR stands for the Norwood assembly plant. The digits 140567 are Fisher body numbers with no relation to the VIN. TR means trim; 711 means black the standard bucket seat interior. The two 71s designate Le Mans blue paint for the upper and lower body. The date code is next to the left-side rivet on the tag; 10D on this tag means the car was made in the fourth week (D) of the 10th month (October). The X codes commonly found on Camaros to designate different models weren't added to Fisher Body tags until mid December 1968; because this car was built before then, the tag will not contain the X77 (base Special Performance Package) or X33 (with the Style Trim Group) codes that usually accompany a Z/28.

Ralph also snapped this photo of the numbers on the transmission, which reveal "530506," another match to the last six digits of the VIN.

Ralph was the happy recipient of Donnie Detzel's trips to the local Dailey Chevrolet parts department many years ago to stock up on GM parts for his Camaro. Donnie told us he always knew his 425-horse Corvette and his Z/28 Camaro would be collector cars and that after a certain number of years GM would no longer be obligated to stock replacement parts.

The trunk was stuffed full of parts, including heads and an intake manifold.

It was a very happy day for Ralph when he brought the Z/28 on a flatbed to his home garage.

The interior, featuring black vinyl seats, is in excellent original condition, having been garaged since at least 1976.