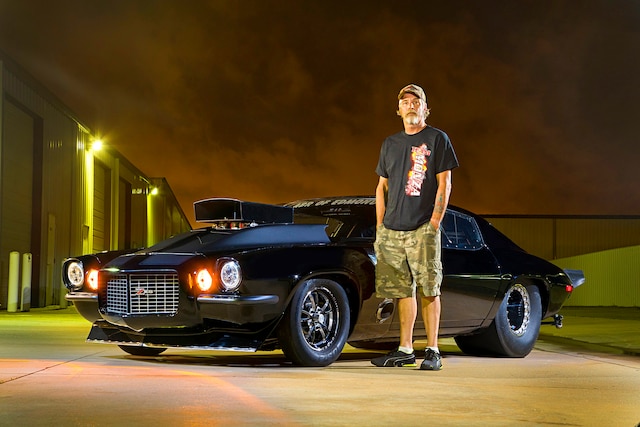 Tonight on Street Outlaaawsss! Known the world over as Monza from Discovery Channel's Street Outlaws, Jerry Johnston's "Sinister Split Bumper" 1972 Camaro may just be the cleanest, hardest-running car we've seen. It spent a good amount of time at the top of the 405's Top 10 list, and Jerry is one of the best drivers on the show—fearless and with the ability to pedal and steer the car down the track when things get squirrelly. However, like the other guys at the top of the list, Jerry recently brought his car in for a thorough reworking.

As their competitors on the show have gotten faster, lighter, and more outrageous, the guys from the 405 have had to respond in kind. Several cars from the show have undergone massive changes, all in the name of more power, less weight, quicker times, and more speed. As part of its overhaul, the Sinister Split Bumper got a new engine, a revised nitrous system, some chassis tweaks, and a raft of carbon-fiber parts—enough carbon, in fact, to bring the Camaro down to a legit 2,630 pounds at race weight. Anyone who knows anything about second-gen Camaros knows this is a heavy platform, so it's no mean feat to get these cars this light, yet be safe enough for the speeds Jerry's car is capable of.

Whether he's a glutton for punishment or just a highly driven workaholic (we suspect the latter), Jerry also managed to build a second Camaro during the refresh of the Split Bumper. Say hello to Jerry's 1980 Camaro. He bought it as a rolling chassis about two years ago from a friend. He redid the whole car from bumper to bumper and dropped in a 468 big-block and TH350 combo. The engine's 10.0:1 compression ratio lets it run on 91-octane gasoline, while the 4.56:1 gears should be good for wheels-up launches at the dragstrip. It has a full interior, a radio, and electric windows, so this is a street car first and foremost. Jerry gave it a paint job that's the mirror image of his Split Bumper: black stripes over a Cyber Gray basecoat. He had the car running within a year, ready to take on the street or strip. "It should be good for 10s," Jerry says, which is what many people consider to be a really quick street/strip car. It's interesting how driving a 3,000hp car can shift your perspective.

Who: Jerry Johnston
What: 1972 Camaro RS/SS "Sinister Split Bumper"
Where: Oklahoma City, OK
Engine: Here's what it takes to be competitive in the brave new world these guys on Street Outlaws roll in. Jerry went big on displacement, buying a used 762ci Gene Fulton big-block Chevy. It's made from an aluminum Donovan block with a 5-inch bore spacing, CFE symmetrical-port cylinder heads, a Bryant billet crankshaft, GRP aluminum connecting rods, and Diamond pistons. The compression ratio is 14.0:1. In the heart of the block is a solid roller Comp 4/7 swap camshaft that provides about 0.970 inch of valve lift through a Jesel beltdrive, Trend pushrods, Jesel shaft-mount rocker arms, and Manley valvesprings. The Moroso dry-sump oil system keeps this high-winding big-block safely lubricated all the way down the track. On the motor, this combination is good for 1,450 hp. Blake Housley built the custom, stainless-steel headers.
Induction: A pair of Quick Fuel carburetors sit atop a Gene Fulton intake manifold, and nitrous is Monza's power-adder of choice. Four stages of a Monte Smith fogger system are plumbed into the intake.
Transmission: Mr. Wendell's Motorsports built the two-speed TH400 transmission with enough go-fast parts to handle several thousand horsepower. The Torque converter comes from Pro Torque.
Rearend: A McNasty 9-inch from Mickey's Chassis Works has been a time-proven performer underneath the Camaro, surviving several seasons of racing on the TV show. A QA1 carbon-fiber driveshaft connects the trans to the rear.
Suspension/Wheels: The strut front end is from Terry Murphy Racecars, while the rear is a four-link from Mickey's Chassis Works. Santhuff springs and shocks are on all four corners. Jeff Lutz built the wheelie bars. A set of Weld Full Throttle frontrunner wheels, paired with a set of Delta-1 rear wheels shed a lot or rotating mass—and look great doing it.
Body: To get the car as close to 2,500 pounds as possible, carbon-fiber body parts was almost a necessity. The front clip, doors, and most of the interior are made of the exotic material. The Optic Armor windows also shed a ton of weight, compared to the stock glass. ABR of Edmond, OK, painted the car with its gorgeous but subtle gray over black finish. Inside and around the car you'll find ProLite lithium batteries, a Davis Technologies Profiler traction control unit helps limit wheel speed when the tires break loose, and wiring components from Speedwire. The yellow model car zip-tied to the rollcage bars was a gift from 10-year-old fan Garrin Bonjour, who was killed in a traffic accident, a tragic reminder how short and unpredictable life can be. Garrin was a huge fan of Jerry, and a small piece of his life rides with him in the Camaro.

Engine: Jerry had local engine builder Mike Henson build a stout 468-inch big-block Chevy for this potent street machine. Starting with a stock 454 block, they added a forged stroker crankshaft, H-bean connecting rods, SRP pistons, and a Comp hydraulic roller camshaft. The engine breathes through an AED Performanceprepped Holley 950 carburetor, and a pair of aluminum Bowtie cylinder heads help flow air through the engine with great efficiency. At a 10.0:1 compression ratio, this combo runs drama-free all day long on pump gas, yet made an impressive 626 hp on Mike Henson's dyno: "The car should run 10s."
Transmission: KC Boggs of Boggs Transmission built a tough TH 350 to go behind the stroker Rat. A TCI converter sits in between.
Rearend: Quick Performance, of Ames, IA, got the call when Jerry needed a rear axle. Rather than messing with a stock 10-bolt, he installed one of their F-car 9-inch housing and axle assemblies. The final drive ratio is a relatively steep 4.56:1 that provides hard launches at the track.
Suspension: It's mostly stock under the car, save for the Moroso 90/10 front shocks and Competition Engineering rear shocks. The front and rear suspensions were completely rebuilt with all new components.
Paint: You won't have to look at both of Jerry's cars too long before you realize the paint schemes are mirror opposites of each other. Where the Sinister Split Bumper has gray stripes over black, the 1980 Camaro has black stripes over a Cyber Gray basecoat, which is a 2014 GM color.