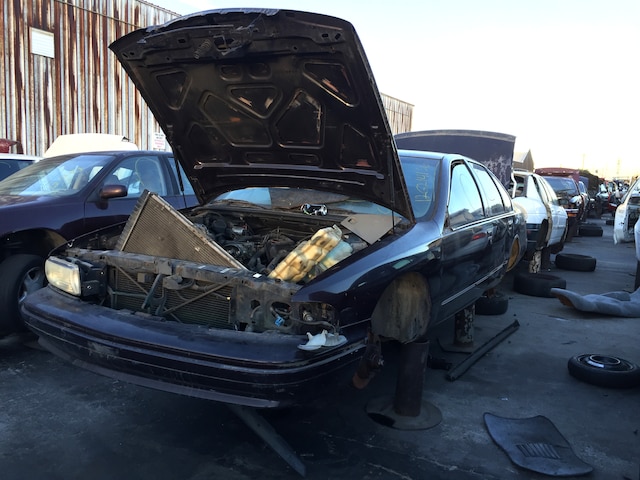 "Have we fallen this far?" mused a colleague as I scrolled through the pictures on my phone. He agreed that this was a real 1995 Impala SS I found rotting away in LQK's Pick-Your-Part in Wilmington, California. Having a personal affinity for Chevrolet's B-body platform, I felt confident this was a real SS, rather than a converted Caprice police car. My friend is a current owner of a 1996 Dark Gray Green Impala and has owned several fullsized Chevys in the past, so he knows what to look for, too.

So what's the big deal? Well, not that much, really. The Impala is mostly a trim package based on the Caprice 9C1 police car, but it got a monochromatic paint and trim treatment, the lower ride height came courtesy of shorter springs, and it rolled on classy-looking 17x8 five-spoke wheels with wide BFGoodrich tires. The rear axles were slightly longer than the Caprice and 9C1, which helped fill out the rear wheelswells. The difference is striking. Park an Impala SS to the same-year Caprice, and they almost look like two different models. It shows in sharp contrast just how much better a car can look with a few subtle changes to the ride height and rolling stock.

It's also significant because these cars, the B-bodies (Chevrolet Caprice, Buick Roadmaster), and D-bodies (Cadillac Fleetwood) were the last rear-drive, body-on-frame passenger cars GM made. GM knew the model line was to be discontinued, but the company still gave the Impala SS the green light. The Impala SS was in production from 19941996.

When we first spotted the car, we figured it was a 9C1 (police package) Caprice with Impala badging; it's a pretty common thing to do since the police cars were cheap and abundant. The RPO code sticker inside the decklid had been painted over (please stop doing this, people!), so we had to rely on our powers of observation to figure out if this car was an Impala or a clone. The emissions label at least tells us this is a 1995 model with the LT1 engine. All Impalas came with the 350, where the Caprice and police package had the 4.3L V8 as the standard engine.

Though the Impala shared an instrument panel with the rest of the Caprice line, the police cars are marked "Certified" under the speedometer. The instrument panel was missing in this car, however, which got us starting to believe this was an Impala. The police gauge panel has far less value and would have been left behind.

Police cars had distinctive, green silicone radiator and heater hoses that most people don't bother to change when building a clone. Standard radiator hoses on this car are even more evidence in favor of this being an Impala.

Impala seats were unique. Based on the buckets found in Buick Roadmasters, they featured headrests with and embroidered SS logo. The headrests were suspiciously missing in this car. In 1996 all Impalas got a center console and floor-mounted shifter handle.

There's one of the Impala SS wheels left in the trunk. It shares the 5x5 bolt pattern with the police cars, fullsized station wagons, and 1/2-ton RWD pickups.

A rear axle with the RPO code G80 limited-slip differential was standard on all Impala SS models, and it was still intact under this car. Notoriously stingy with the LSDs, GM offered them only as options in the Caprice and police package cars. Rear disc brakes were standard on police and Impala models, where the standard Caprice made due with rear drums. Dual exhaust was standard on all LT1 cars.

The Impala was only available in black for 1994. Cherry and Dark Gray Green Metallic were optional paint colors for 19951996. The red paint here is the correct Impala color. Most police cars were white, and clone builders often don't take the effort to make a complete color change to the entire body.

Read the tech article on a Paxton-Powered 1995 Impala SS, brought to you by the experts at Chevy High Performance Magazine.