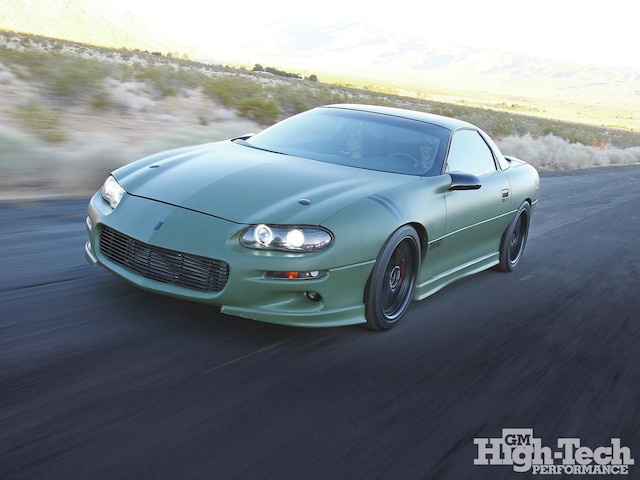 "There is no other form of motorsport I have done that is so adrenaline pumping. The air and wind pushes the car around like a rag doll. The glass windows bend in and let hurricane level wind inside the cabin. The noise sounds like you're inside a tornado. The six-point harness, race seat, fire suit, arm restraints, and head restraints make you feel like you're in a straight jacket strapped to a rocket. The feeling of pushing over 1,000-rwhp full throttle non-stop for a mile is insane. It's almost as if the tires are ferociously pulling the entire earth toward you." Meet Josh Forster, the 23-year-old owner, engine builder, turbo fabricator, and driver of the awesome matte green Camaro Z28 you see before you. And yes, it's a wrap, that he applied himself in his garage without ever having done one before. That's really Josh's thing, this kid does (and pays for) everything he can by himself on his way to running 200 mph and beating a 1.9-million-dollar Bugatti Veyron at the standing mile.

Now, what you may not expect from this story is where it all began. "When I first drove the car home after buying it, I thought it was the fastest thing in the world. I was positive I would only ever put an aftermarket muffler and air filter on it. It snowballed out of control from there." Yeah, that's one way to put it. Actually, it was an oil pump issue that really took Josh's Z28 to the next level, when a simple oil pump change turned into a camshaft upgrade. Hey, if you're in there, you might as well, right? "It was fun until the excitement wore off and it felt 'slow' again." A while later, bored with his cam-only power, Josh got an offer on a "Chinese" turbo system that he just couldn't refuse, even though he claimed he would "never ever consider putting a turbo on his car." Five mangled pistons, three bent rods, and a cracked block later, it was time for Josh to build his motor to support his turbo habit and build a turbo system with quality components to keep everything under control. Like a real do-it-yourself guy, Josh jumped into the engine build head first, even though he had never attempted anything like that before. "I never grew up around cars, and have taught myself almost everything that I know about engines and turbo systems… Aside from not owning a dyno or TIG welder, everything was built in my small garage, by myself, with a Sawzall and MIG welder." Starting with an LQ4 block, Josh put together a stout little 404 for the Camaro and upgraded his turbo system with a quality wastegate from Turbosmart. That combination was good for power in the upper 500s, which was, as you can imagine, still not enough.

Two turbo upgrades and a completely redesigned turbo system later, all built in Josh's garage (not the turbos, obviously!), the Z28 was rocking 720 rwhp, and Josh decided he would like to take a shot at running the car at the Mojave Mile, a one-mile standing start race out in the Mojave desert. This first effort didn't prove very fruitful, as Josh only managed to run 164.1 with the car stumbling and misfiring as soon as it crested the 160-mph barrier. "We later found out that the speed limiter was cutting fuel and leaning out the motor." The engine didn't appreciate this, and a certain piston decided it wasn't going to partake in Josh's antics any longer, chunking a ringland and throwing it through the exhaust and into the turbine wheel, destroying both the engine and turbo in the process. An average 23-year-old kid with a broken engine and turbo system would probably give up right about now, but Josh decided to just go bigger. The LQ4 block was pulled and taken to 4.030 inches to fit a brand-new set of Wiseco forged pistons featuring Teflon coated skirts and ceramic coated tops, along with Teflon coated Eagle 6.125-inch forged H-beam connecting rods. Down low, Josh stuck with a 4-inch stroke Eagle crankshaft, which rides on stock main caps torqued down with ARP studs. "I rebuilt the motor to a 408, this time spending more effort on the internals, getting everything Teflon coated to improve oil shedding, ceramic coated to improve thermal efficiency, better ventilation to improve crankcase pressure, etc." Josh topped the 408 with a set of West Coast Cylinder Heads CNC-ported Edelbrock Pro-Port Raw cylinder heads, which WCCH built specifically for this application to match the turbocharger and the Comp Cams hydraulic roller camshaft.

With the bigger motor, it was time for a bigger turbo and Josh decided to step his Camaro up to big boy status, ordering a massive GT91 turbocharger with a T4 housing. "The turbo was so heavy, I decided to build a new turbo kit from stainless steel, with supports to hold the turbo." And so, he did. Using a set of GM truck manifolds, Josh began the build, taking 2.5-inch stainless steel from the manifolds to the turbocharger, where exhaust is removed through a 4-inch stainless downpipe, all of which has been ceramic coated for superior thermal management. Turbosmart was chosen for boost control, with a Turbosmart 50mm Pro-Gate controlling the exhaust flow, receiving its instructions from a Turbosmart e-Boost2 boost controller stuffed inside the cabin. "This combo resulted in over 800 rwhp. We had trouble squeezing more power out of it on pump gas, so I left it where it was and tried again at the Mojave Mile." Again, frustration, as the Camaro decided to tear a silicone coupler in the middle of the run, resulting in a major boost leak and a top speed of only 188.5 mph. "Better, but not the 200 I was hoping for."

"Two weeks before my third Mojave Mile race, I installed a meth injection kit from Painless, and a bigger Airaid air filter, and decided to get it retuned. We still couldn't get much more than 850 rwhp of it, and the boost pressure was becoming irregular. I called up Turbosmart and ordered a new e-Boost2 boost controller. The next week I came back to get it tuned again, and since Turbosmart was local, they actually came to the dyno shop to help set it up. With the help of Cunningham Motorsports and Turbosmart, we got it all tuned perfectly, and got the boost curve perfect, but it still wasn't making the power I wanted. We measured backpressure and realized it was through the roof. So with one week before the race, I set out to build a brand-new T6 flanged turbo kit. I had everything I needed overnighted, and spent every night that week up till 4 am changing the whole turbo system. When I took the turbo off, I realized that the bearings had too much play and that I wouldn't have time to get it rebuilt. I had the guys at Comp Turbo take a look at it, and they had me run the turbo since it wasn't too bad, and we wouldn't have time to order parts for it. I got the car all back together and went in that Thursday to get it tuned again. This time it made 1,020 rwhp on only 17 psi with 91-octane and a small shot of meth. It was more than I needed, so we set up the boost controller to have three stages: 750 rwhp, 850 rwhp, and kill mode of 1,020 rwhp. The next day I packed up all my supplies and headed out to Mojave."

With two full days of racing ahead of him and a Density Altitude of 4,000 feet, Josh knew it wasn't going to be easy to run the number. Day One was spent shaking down the all-new combination, tweaking the Camaro both aerodynamically and physically. On the second stage, which lays down 850 rwhp, Josh ran fast, trapping at 199.3 mph on his best effort. After several more runs, all just shy of 200 mph, it was time for Josh to put his big boy pants on. "It was getting hotter, so I quit wasting time and put it in kill mode: 1,020 rwhp. I could have easily called it quits until the wind died, but I wasn't about to give up." As the flagman waved Josh forward, the Camaro left slowly and began to accelerate down the mile. "The tires spun hard in every single gear, even shifting into fifth. The transmission had a hard time going into fourth, so that cost me a couple miles an hour. I had a momentary boost leak in the middle of the run, but something must have sealed up and everything was fine. I watched the needle quickly climb to around 200 mph on my gauges, and I crossed the finish, looked to the right, and from a mile away I could see my friends jumping up and down waving their arms." Josh knew he had done it, and when he got to the time station, he was rewarded with his 202.5-mph timeslip, making him the youngest person to enter the Mojave Mile 200 club, an elite group of racers (31 as of this writing) who have managed to break the elusive 200-mph barrier. "A lot of people told me that I wouldn't be able to hit 200, but I never let that stop me. And it feels even better to prove them wrong."

In this feature article GM HIGH-TECH PERFORMANCE takes a look at this 1999 Chevrolet Camaro z28, which is a street-driven 9-second sleeper - GM High-Tech Performance Magazine