Mocking the laws of physics in a two-ton, two-shot, two-bolt-LT1 Impala SS 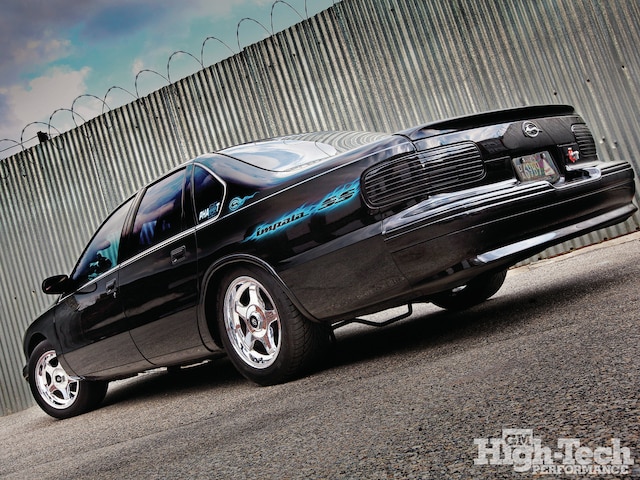 One particular line catches your eye in Alex Santacroce's tech sheet: "My goals are to have a consistent 9-second car, without carnage." That's the kind of entertainingly simple statement that lots of owners might make for their projects. But getting a two-ton '95 Impala SS into the 9s with a bunch of stock parts, a budget (2-bolt-main) LT1, and two nitrous kits? "No way," the car guys say. "You're pushing it," the Laws of Physics say. And Alex loves to prove them wrong. Twenty-six-year-old "Big Al" Santacroce was always a fan of big power--but when his wife turned him on to B-bodies a few years back, his idea of power was felt through the speakers.

"I've got my wife Michelle to thank for this Impala," Al starts. "She was looking for a car to buy, and one day she said, 'Why don't you buy an Impala SS?'" Once the Ardmore, Pennsylvania, resident saw one, his eyes were wide open. "The Impala was it: Here's a full-size family car with power, a big-body muscle car. I found a deal and jumped on it. "I started out doing the show scene--I did a nice paint job, new interior, big rims, a custom stereo, and TVs all over the place. And believe it or not, it was the wife who inspired me to modify the engine. When she said, 'Why don't you put some 3.73 gears and some headers on it?' she created a monster!" So at the request of Michelle (or as she's known around here, The Best Wife Ever), he started adding bolt-ons. Santacroce loved doing mods, then driving around town to feel the power gains. One day, he ran across a Caprice wagon that wanted to race. Al was game--and the big boat embarrassed the Impy. "After that I said to the guy, 'I'll be back,' and haven't stopped modding it since."

When wagons the size of small houses are smoking your ride, it's time to move past bolt-ons. So to challenge his Caprice-driving buddy, Al had a local shop build a 383/nitrous combo. The subsequent 13-second timeslip was underwhelming. "I wasn't happy with that result, but then I met Albert Galasso from Al G's Performance. He put a plate nitrous setup on, we added some suspension parts and tuned them, and the Impy eventually ran 11.40s." But with big power comes big breakability: In the quest for 11s, the driveline carnage was swift. Santacroce's much-abused 4L60E trans--dealing with 4,000 pounds of car and a juiced-up 383--called it quits. He installed another one--it broke. Then another…and then another. Factor in the three posi units that went tits-up under torque, and this B-body was building quite the body count. But then Al finally caught a break that didn't involve, well, breaking something.

"I'd been through four 4L60Es trying to get into the 11s before I met Frank Cahall. Cahall Performance Transmissions had 4L60Es going low 11s and 10s. I give Frank a lot of credit when it comes to my transmission." The CPT trans was no longer the weak link--the 383 was. But when the engine broke, it wasn't necessarily a bad thing: A self-described "big talker," Santacroce was now completely hooked on grudge racing, and he needed ponies big enough to match his boasts. So with the "goal being to be able to talk trash grudge racing-- and back it up," Galasso built him a new 383 stroker. An LT1 block was bored .030-over, decked, and clearanced for a stroker kit. Galasso left the 2-bolt mains, adding only ARP bolts. Scat's 3.75-inch forged crank and I-Beam Pro Comp rods combine with SRP pistons for a strong-yet-affordable bottom end. ARP bolts secure Lloyd Elliott-ported, Ferrea-valved LT1 heads; combined with the flat-top pistons, the result is a feisty 11 to 1 compression ratio. Comp Cams' 230/236 hydraulic roller cam fires orders up to Scorpion 1.6 rockers. When the 2.00-inch intake valves open, the big gulp is thanks to a cold-air intake, an Edelbrock 58mm throttle body, and a Lloyd Elliott-ported LT1 manifold. Post-combustion gases flow past 1.56-inch exhaust valves, through 1.75-inch long-tube headers and an X-pipe, and escape from a 2.5-inch exhaust system.

With a 255-lph fuel pump providing a pump-gas/C16 mix for the 200-horse plate nitrous kit, 30-pound injectors, and PCMforless tuning, the Impy responded with solid 10.5 e.t.'s. Al was thrilled, but Galasso knew that a different nitrous delivery would result in extra power. So a Steve Johnson direct-port fogger kit was installed, along with its own underhood, one-gallon fuel cell, and a Holley Blue pump. With this separate fuel system supplying straight C16 and the fogger running 175-horse jets, the Impy improved to 10.20s. Damn fast? Absolutely. But do you think a guy who works, "I'm all-out on full spray when the light goes green!" into casual conversation is happy with low 10s when there's an unused stage of nitrous laying around? Negative Ghost Rider, the bottle is full. Al wanted 9s, and he was willing to use both nitrous systems to do it. So on a chilly Northeastern day, Al bolted up a fresh set of slicks, activated both the fogger and the plate systems, and smashed the gas.

You know what would wrap this story up with a nice little bow? Saying that Al made a 9-second pass without breaking anything. Wouldn't that be great? Wouldn't it make you feel all Christmas-morning, new-puppy warm and fuzzy inside? Of course it would. Well, that's exactly what…no, the Impy broke some stuff. Turns out, the wire-ring head gaskets didn't care for that double dose of juice. But as the LT1's heads were lifting and its coolant was blasting out of the block, the Impala still blasted a 9.91 at 136 quarter--with Al presumably saying, "Suck it, physics!" as he crossed the finish line. The head gaskets were a quick fix--and, according to Santacroce, "A small price to pay for a 9-second time." While he still loves going to the track, Al also enjoys his reliable Impala SS on drives to work, and you can catch him at the Plateau in Philly every Sunday. (Yes, I said reliable--when it's not ingesting piston-melting loads of nitrous, this Impala coos like a Camry.) Though he's won fast e.t. events at Cecil County Dragway, and took home three trophies including fastest e.t. at the 2012 Northern Super Heavy Shootout, Al has found a new challenge: actually getting people to believe his SS is as fast as he says it is. "I can load my family up and take it grocery shopping, take it to the track, change wheels, run 9s, and drive home. But everybody thinks the big heavy car is gonna run maybe 12s. When I was thinking about upgrading the driveshaft, I called one of the big companies. The guy on the phone said, 'There's no way you're running those numbers on a stock driveshaft.' I said, 'Well, here's the video on YouTube.' Guys are like, stock driveshaft, you can't, 2-bolt mains, you can't. But I did."

Read the tech article on a Paxton-Powered 1995 Impala SS, brought to you by the experts at Chevy High Performance Magazine.