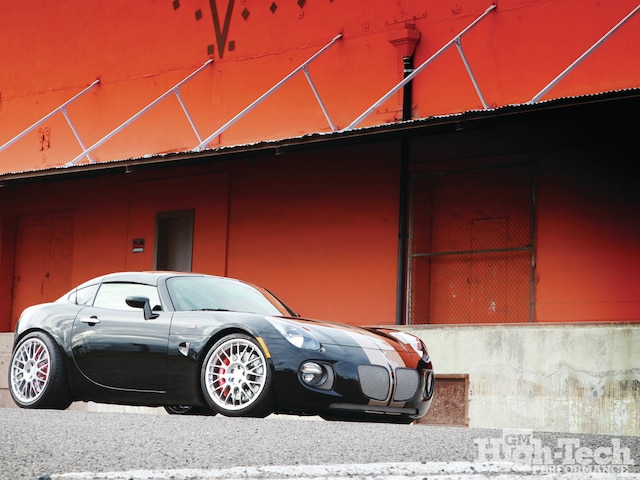 It's a story as old as hot rodding itself. Take one part big V-8 engine, one part tiny little car, stuff 'em together in anyway possible and try your best to keep the entire combination shiny side up. We've been doing this since the internal combustion engine first hit the streets and we're sure it will continue as long as humans have access to horsepower. Of course, traditional big engine swapping usually follows the line of taking a beat-up but lightweight car and stuffing it with a cheap big-inch junkyard engine, adding a little bit of nitrous, and heading to the drag strip to see how fast it will go in a straight line. But what if, in this day and age, you were looking to add some big cubes to a corner carver and instead of going the budget route, you were interested in seeing just how far real money could go?

Enter Larry Kitahara, a serious hot rod enthusiast from Fresno, California, who has been a part of this game for longer than many of us have probably been alive. As the owner of the Kitahara Buick GMC dealership in Fresno, Larry is no stranger to serious horsepower--he has literally been dealing it for years--and he has always been a fan of the fast and twisty stuff, as evidenced by his current collection, which includes a Ford GT and '65 Shelby Cobra stuffed with a 427 cubic-inch Ford motor. Now, if you're wondering what a Buick GMC dealer is doing with two Ford powered rides, well, join the club. But if you've already peaked at the engine bay pictures of Larry's Solstice GXP Coupe, you're probably ready to hear more about the real star of Larry's stable, this LS7-powered '09 GXP Coupe, which Larry had built to his specifications by Dave Gilbert at Performance Autowerks in Plainfield, Illinois. And when we say built to his specs, we mean it, this car only had 221 miles on the odometer when it was shipped out, and its sole purpose was to become what you see before you today. "It's very unique," says Larry… Indeed, it is.

In stock form, the GXP shipped from the factory with a turbocharged 2.0-liter ECOTEC four-cylinder engine rated at 260 horsepower and a matching 260 lb-ft of torque. That's pretty stout in a car that weighs 3,018 pounds, no doubt, but just imagine the fun you could have by doubling both of those numbers, along with doubling the cylinder count, and increasing displacement by oh, lets say, 3.5 times. Yes, we're talking 7.0 liters of LS7-powered madness stuffed between the factory frame rails and 515-rear wheel horsepower to motivate the little GXP Coupe. Dubbed the Werks 427 GXPR, Larry and Dave teamed up to build a legitimate street terrorist and while installing a stock LS7 would have been "good enough," they weren't about to stop there. Over at APEX Machine, the crew tore the LS7 down first, decking and honing the block before balancing the entire LS7 rotating assembly and adding a set of ARP head studs and Cometic head gaskets to the mix. While it was apart, they ditched the factory camshaft and cylinder heads, adding a Katech 116A bumpstick with a healthy 220/240 duration and .615/.648-inch lift, along with a pair of CNC-ported LS7 heads, cut with a 5-angle "race" valve job and 2.20/1.61-inch valves, just to, you know, spice things up a little bit. Continuing that theme, Performance Autowerks also canned the functional but boring LS7 intake manifold, replacing it with a gorgeous Wilson Manifolds Billet Bank unit, finished off with a Nick Williams 102mm drive-by-wire throttle body. As you would imagine with such a swap, the next step was to add a set of vehicle specific manifolds, which Werks had in stock, along with a killer 3-inch exhaust system to bring in the noise.

With tire melting power from idle to redline, the modified LS7 was ready to rock and roll, and so began the fortification of the rest of the drivetrain, beginning with the transmission. For obvious reasons, the stock five-speed manual box was sent to the scrapyard, replaced by the tried and true T56 six-speed from an F-body. An ACT twin disc clutch was installed, along with a Werks short-throw shifter and that was that. Amazingly, Dave and Larry both agreed to keep the factory installed IRS rear end in place, which they only upgraded with a Quaife limited-slip differential, 3.73:1 gears, and a set of Drive Shaft Shop axles. Obviously, the stock wheels and tires were also on the scrap list, thrown away for a set of high quality 19-inch CCW C2K wheels wrapped in meaty Pirelli PZero Corsa tires. Up front, Larry rides on 10-inch-wide hoops, while the rear rocks a pair of 11-inchers tucked nicely underneath a pair of modified rear fenders, which were pulled ever so slightly to keep a stealth but wide appearance.

Thinking an 11-inch-wide 295 on the back of a Solstice sounds extreme? It is, but believe it or not, Performance Autowerks barely had to modify the chassis to make it work, relying solely on the fender stretching to tuck them under. That's right, OEM upper and lower control arms do the job, which ride on a pair of slick Penske Double Adjustable remote-mount canister coilovers, found front and rear, matched with Hyperco springs for the perfect stance and improved handling. Remember, Larry wanted his one-of-a-kind GXP to handle like the rest of his collection, so the Penske coilovers were further matched with a set of performance sway bars (GMPP Z0K Solstice front bar, Eibach rear), a DDMWorks Pro-Beam rear brace, and a Werks Racing tunnel brace. All of the factory bushings, which normally give a soft but decent ride were also tossed, replaced instead with a complete polyurethane bushing kit from Energy Suspension. Braking comes courtesy of Rotora, with massive 14-inch rotors up front bound by six-piston calipers matched with a set of Rotora/Werks 13-inch rotors and four-piston calipers out back. We're not sure which direction pulls more g-Forces (the LS7 going forward, the sticky suspension going left to right, or the Rotoras bringing things to a stop), but we're going to guarantee that Larry's GXPR has more in common with a roller coaster than the stock Solstice it started life as.

Finally, with all of the insanity almost complete, it was time for the Solstice to head to the paint shop, where Performance Autowerks had DuPage Autobody add a set of gold racing stripes over the factory "mysterious black" paint, which compliment the custom Racemesh grills, front and rear, and the trick RK Sport carbon fiber rear valance. Inside, the sprucing up project never stopped, with the factory seats being tossed for a set of Sparco Milano black leather racing buckets that tie into a pair of Sparco 6-point harnesses and a Werks Racing harness bar. That's probably the only part of this build with a focus on actual safety, since everything else reeks of insane, over the top, Wild West recklessness. And that--the sheer insanity of it all--is exactly why we love this stock Solstice turned 427 GXPR. If 3,000-odd pounds worth of short wheelbase, tire shredding, LS7-pounding excess doesn't get you going, well, you may want to get that checked out.