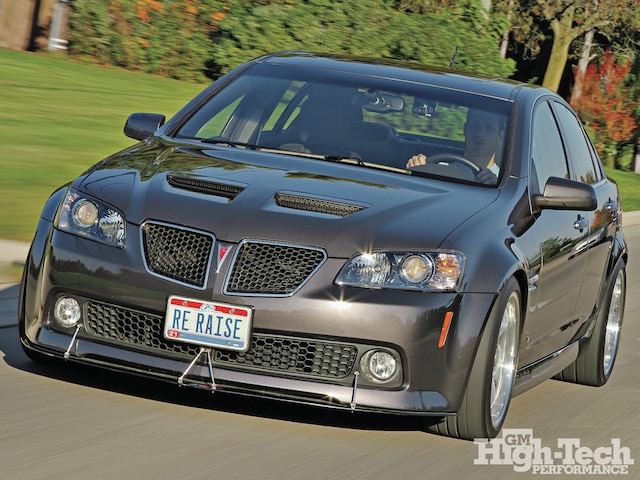 To say Scott Cook was upset at the announcement of Pontiac's demise would be an understatement. He was at Norwalk Raceway, in his home state of Ohio, when the announcement shot through the pits. That was the spring of 2009 and Cook hasn't set foot at the dragstrip since. That's a shame, because he has quite a legacy there, including a '98 Grand Prix GTP that ran 9s, a '00 Bonneville SSEi that ran 10s, and his current car, a 723-rear-wheel-horsepower turbocharged '08 G8 GT that has run 10s--but with oh so much more potential. In fact, its 10.727 e.t. at 129.87 mph made it the quickest and fastest G8 from April 2009 through late 2011.

"I haven't really capitalized on the power available with this combination," says Cook. "When I set the record back in the spring of 2009, we were still working to overcome a lousy short time and deal with transmission tuning." The car's best 60-foot time was 1.711 seconds. A short time in the 1.5-second range would have helped push the car into the low 10s, for sure. As for that transmission thing, Cook was pushing all that power through a mechanically stock 6L80E six-speed automatic. "When we started, no one had figured out the transmission tuning well enough to properly engage fourth gear at the power level we had," says Cook. "I was actually letting off the gas during a run in order to get the trans to shift into fourth. That certainly wasn't helping my e.t."

We spent some time last fall blasting around Columbus, Ohio, with Cook and can attest to the car's ability to work through the gears cleanly, smoothly, and without hesitation--at least on the street. His experience in working with tuning issues came through his business, INTENSE Racing, which he founded in 2001. It became a hot spot for the fraternity of W-body racers and others pushing the 3800 V-6 to new performance heights. The shop built Tim King's 8.991-second Firebird--the first 3800-powered rear-drive car in the 8s--and the '99 Grand Prix of Scott's brother Bob, which was the first 3800 front-drive car in the eights, with a blistering 8.902 at 154.9 mph.

Cook sold INTENSE in 2010 and it remains a respected parts and tuning house in the Columbus area, but before doing so, he finessed his G8 into the street sweeper we enjoyed during our photo shoot. When he bought the car, his intention was to build another demonstration of INTENSE's capabilities, but then the General came along and pulled the plug on Pontiac--and took the wind out of Cook's sails.

Nevertheless, what he accomplished is amazing, even if that red "dart" emblem between the grille openings creates mixed emotions. Then again, he only needs to spool up those twin hairdryers to change his attitude. The pair of Mitsubishi TD065-20G turbochargers come on quickly yet smoothly, delivering a refined rush of power. And in a big, quiet car, like the G8, such a progressive application of horsepower feels very strong yet deceiving, because the cues you typically experience in a smaller, lighter car are subdued--so the only references to the warp-speed acceleration is a speedometer needle that swings as quickly as the tach. On the street, the turbos are held to about 7 pounds of boost, but at the track they're tuned for 12 psi. Interestingly, they blow into the car's L76 6.0-liter engine that still uses the stock rotating assembly and cylinder heads. Seriously. It has run 10s with 12 pounds of boost blowing through an engine with the factory cast crank, powdered-metal connecting rods and hypereutectic (cast) pistons--and a comparatively high compression ratio of 10.4:1. "Yes, it may appear to be a bit risky, but so far it has all held up perfectly," reports Cook. "A well-engineered package combined with great tuning creates a much safer and more reliable situation than you might otherwise expect."

He didn't leave the rotating assembly completely untouched. He swapped out the connecting rod bolts for Katech's super-strong units. He also changed the camshaft for a more boost-friendly grind from COMP Cams. It delivers .612 inches of lift on the intake and exhaust sides, as well as 230/240 degrees of duration and a 116-degree lobe separation angle. To accommodate the aftermarket camshaft's three-bolt flange, an LS2 cam gear and timing chain were installed. The short-block was buttoned up with a Powerbond harmonic balancer.

And while the L76 cylinder heads--identical to the famed, high-flow, L92 rectangular-port heads--are stock, the valvetrain components attached to them have been upgraded to work with the new camshaft. That includes a set of PAC Racing 130-pound valvesprings and titanium retainers. A set of LS7 lifters and TrickFlow chrome moly pushrods were also installed, along with the replacement of the stock head bolts for stronger ARP head studs. Changing the lifters effectively decommissioned the L76's cylinder-deactivating Active Fuel Management system and Cook had the whole LOMA (lifter oil manifold assembly) removed from the engine.

As we mentioned, the engine uses a pair of Mitsubishi turbos, which are mounted low, at the bottom of the engine compartment via a modified APS kit. They're matched with twin TiAL 38mm external wastegates, regulated by an AEM Tru-boost, and blow through an APS intercooler to give the high-compression engine a cooler air charge that's not as prone to detonation. At the back end of the combustion system is a Magnaflow three-inch exhaust system. Fueling the pressurized L76 turned into one of the larger challenges of the project, as there wasn't a sufficient in-tank solution--especially for a factory-style returnless system. The answer was a custom, return-style system. The supporting components include modified LS7 fuel rails, Siemens 60-pound injectors, an Aeromotive pressure regulator, and a pair of Walbro GSS392 inline fuel pumps, which are used with a custom four-gallon surge tank that's mounted in the trunk. A pair of large -6 AN fuel lines feed the engine and there's a single return line. And after the system was all together, a profound smell of gas permeated the car.

After checking and rechecking for a leak, the problem was traced to the conventional rubber fuel lines, which are permeable enough to release the odor. Cook switched to Teflon-lined fuel hoses, which solved the problem immediately. With the increasing use of alcohol-based additives and supplements in gasoline, it's a problem more and more enthusiasts are dealing with. "It definitely took some trial and error, but the fuel system works great," says Cook. "And switching to the Teflon-lined fuel hoses made a huge difference, too. The smell was overpowering before that."

Just as the fuel system took some trial-and-error adjustments, so did nailing down the proper transmission tuning. Contributing to the dialed-in performance, however, is an FTI 3,200-stall torque converter. And to ensure all that turbocharged torque makes it way to the pavement peacefully, the stock driveshaft was swapped with a three-inch chrome moly part from the Driveshaft Shop, as were the axles--also from the Driveshaft Shop. The Level 5 axles were made specifically for the G8 and designed to handle up to 1,000 horsepower. They use chrome moly center bars, 108mm Porsche-style constant-velocity joints, and even feature different-diameter bars for the left- and right-hand sides to reduce wheel hop. In short, they work. Additional chassis and suspension enhancements include a driveshaft safety loop, Pedders Track II suspension system, GXP-model Brembo front brake rotors, calipers and pads, Russell braided brake hoses, and BMR subframe connectors. The Pedders suspension adds firmer bushings, nitrogren-charged twin-tube dampers, and other enhancements. It not only delivers more responsive handling, it snugs down the ride height--particularly at the rear--for a better stance. Inside, only a few subtle changes distinguish this G8 from stock, including a trio of gauges mounted in a custom panel at the top dashboard, as well as an AeroForce Interceptor multi-function scan gauge that monitors ignition advance, knock retard, injector duty cycle, trans temp, and other OBD-II-tracked features.

It's true that Scott Cook took the demise of Pontiac hard. The G8 is his 14th Poncho and he comes from a family where the GTO his father bought shortly after Scott's birth is still in the family. He has started a new business and the "RE-RAISE" personalized plate on the car reflects his enthusiasm for poker, and while he professes to have lost some enthusiasm for racing, we suspect it only takes a few minutes of cruising in his twice-turbo'd G8 to rekindle that undeniable pull for cars that we all have at our core. He can deny it all he wants, but there's no way that a daily-drivable 10-second sedan doesn't still provide a tremendous thrill. GM may have given up on Pontiac, but that doesn't diminish the exhilaration of driving or the camaraderie surrounding the cars.

If we could play the role of armchair analyst, we'd suggest that broken hearts mend and dead car companies live on in our continued experiences with their products. It's time to let go and move on--and with a 10-second ride in the garage, moving on can happen very, very quickly!

It may appear to be a bit risky, but so far it has all held up perfectly...

Get the step-by-step installation of Procharger's HO Intercooled Supercharger System on our 2008 Pontiac G8 GT, only at GM High-Tech Performance Magazine.

Read about the 2008 Pontiac G8 GT dragstrip numbers and painting your bumper on a 1996 Z28, only at GM High-Tech Performance Magazine.

Check out the 2008 Pontiac G8 GT that has 361,a six speed auto, and enough room for five adults inside GM High Tech Performance Magazine.

Check out The Buzz with automotive news including the new 2009 Pontiac G8 GXP and the new 2010 Pontiac G8 Sport Truck, only at GM High Tech Performance Magazine.

Read about the 2007 Gran Turismo Awards from the Gran Turismo video game as well as other news inside GM High-Tech Performance Magazine.

The aging FWD Grand Prix will be replaced in 2008 with the G8, a RWD car based on the Holden Commodore platform from Australia - GM High Tech Performance Magazine