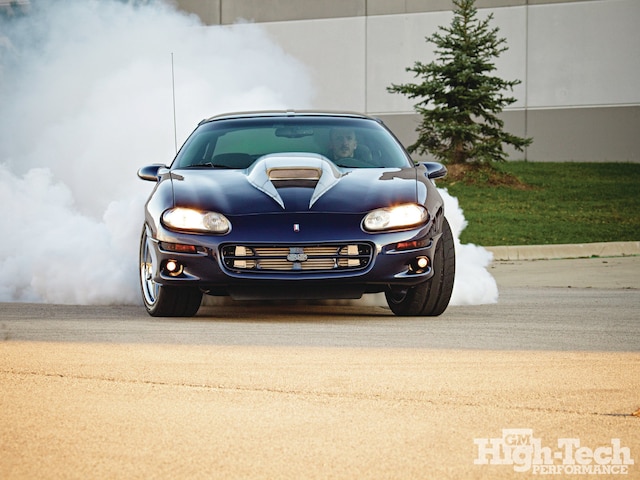 We've all heard it, usually said in the most annoying, pretentious and nasal inflection possible... "Why do you like cars so much? They're stupid." It's a question that almost always takes you off guard; I mean, how can you not like cars? You can try to explain it, but it's one of those things that just can't be understood until you experience it first hand. "It was my dream to own a unique, one of a kind, all around mint Camaro SS," says Keith Wilhelm, the 38-year-old manager from Illinois. "Larry, Lance, and Eric exceeded my expectations in so many ways." Ready for this? "My first week's experience with the car, after the dream team did their magic went like this: 24 hours after picking the car up, we entered her in her first car show ever. Won Best of Show out of 123 cars. Friday night at dinner, the valet man parked the car right up front under the lights. People started posing and taking pictures with it. Sunday, we ran a 10.07 at the track. Monday I drove my daughter to school." And today, Keith's ride is in GM High Tech and his daughter is a certified car nut... What's not to love?

"I found the car on eBay from a car collector in Milwaukee, Wisconsin. Called in sick the next day and went to purchase her." What Keith acquired was a low-mileage '99 Camaro SS that was stock as a rock and coated from the factory in Navy Blue Metallic paint, essentially the perfect foundation for his project. After driving the Camaro for a little while, Keith did what almost anyone in Illinois does when they get the itch and waltzed in to Speed Inc.'s showroom to talk to someone about the future of his ride. As luck would have it, Larry Hamilton was working the counter that day and the pair instantly bonded. "My biggest thanks goes out to Larry. He has always been the brains behind the car." Knowing Larry, we're not quite sure if "brains" is the right word there (Hi Larry!), but nevertheless, Larry quickly rose to the occasion and was tasked with seeing Keith's ride through to the end. After talking it over, understanding Keith's goals and making a proper plan, it was decided that without going overboard, Larry and his crew were to build a Camaro that would end up being a show winner, drag racer, and street cruiser for Keith and his daughter, without giving up any of the creature comforts that we all look for in a quality project car.

Unlike many of the high-dollar feature cars you occasionally see on these pages, Keith's ride is impressive in what it doesn't have, or should we say, what it didn't need to meet Keith's goals. Under the custom hood, Larry and the team at Speed Inc. decided to leave the factory 20,000-mile LS1 in place, adding only a set of AFR 205cc cylinder heads and a mild Speed Inc. spec camshaft to the long-block, which pairs perfectly with a multitude of traditional bolt-on parts, including a set of Kooks 1-7/8-inch long-tube headers and a FAST 92mm intake manifold. And while that would be a great combination on its own, Keith was looking to go a little faster than a heads/cam package could take him, so Speed Inc. stepped up the program substantially with the next modification, an 8-rib D-1SC supercharger from ProCharger, which was set up to build an aggressive 13 pounds of boost at 6,800 rpm. That was enough boost to lay down some serious power on the rollers at AMS Performance, where tuner Chris Black was tasked with tuning the 625-rwhp monster. Keeping with the theme, Chris tuned everything for maximum reliability and civility, while keeping power production well into the 600-plus horsepower range.

Behind the motor, Larry worked hard to make sure Keith's Camaro would remain reliable on the street and track without giving up any of the creature comforts he and his daughter were looking to keep. Finish Line Transmission of Wooddale, Illinois, was called upon to build a Level 7 4L60E, which Speed Inc. stuffed with a Yank 3600-stall converter for maximum fun and acceleration. With 625 rwhp, you probably already knew the stock 10-bolt rear was a goner and you would be correct, as it was replaced with a stout Strange S60 equipped with a set of 35-spline axles and a 3.54:1 ring-and-pinion. Last but not least, the crew chose a set of wheels for the Camaro, going with a budget friendly set of OE Wheels replica "deep dish" C5 hoops, which have a classic, smooth look without going overboard. At 18x9.5-inches up front and 18x10.5 in the rear, wrapped in Nitto NT05R tires, they were the perfect street/strip combo for a car of this demeanor.

With the drivetrain complete, it was time to pull everything out of Keith's Camaro and deliver it to Steel Ridez in South Elgin, Illinois, for the masters of paint to do what they do best. Starting with the chassis, Eric Vitha of Steel Ridez got to work prepping the SS, sanding and smoothing almost everything in sight, including the engine bay, before even thinking about breaking out the paint gun. The trick 3-inch SS-inspired hood from VFN was one of Eric's main projects, which was smoothed on the top and bottom, coated in Navy Blue Metallic paint, and then sent to the airbrush station where the Steel Ridez crew added the custom touches that would guarantee that Keith's Camaro would stand out from the crowd. Along with the car itself, Steel Ridez was also in charge of completing Keith's running gear upgrades, painting almost everything that could be painted on the engine including the valve covers, coil brackets, FAST intake manifold, and even the oil pan. Yeah, the oil pan!

Becoming slightly obsessed, as people tend to do at this point in the game, Larry and Keith upped the level of detail one additional step and sent a crate full of goodies out to the Metal Finishing Shop, who were tasked with polishing everything from the stock A/C components to the Kooks headers and almost every piece of metal in between, including the front mount intercooler and front pulley set, to perfection. There is a lot more here that we can't even mention, so make sure you check out the underhood shots on these pages to really soak in just how nicely Keith's engine bay turned out. After all, this is a show winning Camaro SS for good reason, and in this case a picture is certainly worth a thousand words.

Speaking of a thousand words, we would be remiss if we didn't mention, yet again, just how enthusiastic Keith is about his ride, but more importantly about the friends that he has made along the way. "Larry, Lance, and Eric exceeded my expectation in so many ways...It drives like a stock car and it still kicks ass at the track and car shows." It is, amazingly, everything Keith wanted it to be and more. With his dream ride complete, he had a killer first week and the good times have just kept on rolling. "My 7-year-old daughter can't wait for this car to become hers. It will remain in our family for generations." To our original point, Keith's story is typical of all of us in this hobby and his daughter represents a girl who could never properly explain why she likes cars... it's a passion, a lifelong obsession that you either have or you don't, and Keith's entire family is in it for the long haul, sliding sideways down the street, hanging on and smiling proud!

In this feature article GM HIGH-TECH PERFORMANCE takes a look at this 1999 Chevrolet Camaro z28, which is a street-driven 9-second sleeper - GM High-Tech Performance Magazine