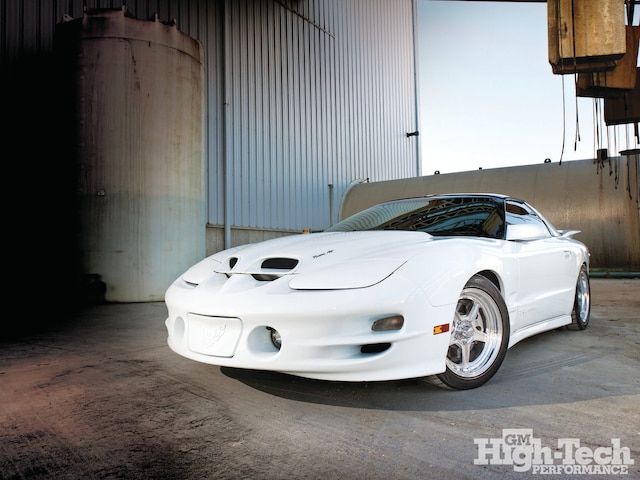 "There's someone outside the media suite looking for you..." Oh no, I thought, it can only be one person... Mike Hawkey. This guy has been blowing up my personal cell phone, office phone and email for weeks and now he has managed to hunt me down in person... does he ever quit?! No, it turns out, Mike Hawkey doesn't quit and it's exactly that unwavering passion for high-tech performance and personalized modification that has earned him a spot in the pages of GM High-Tech. Now, don't let me give you the impression that he is displayed on these pages because he wouldn't leave me alone (just messing with you, Mike!); oh no, Mike's car is here because it deserves the coverage and it truly does stand out as a shining example of what hard work, determination, and perfect execution can do to an already excellent platform, even on a modest budget and with limited resources. However, Mike's personality and his devotion to building a feature worthy WS6 certainly does play a role in his success. You see, Mike isn't a big shop owner or the son of a Saudi oil tycoon, he's just a regular enthusiast like you and me who works daily as a "laborer" in Elida, Ohio. In fact, his 96,000-mile '99 Trans Am WS6 took over 5-years to reach its pinnacle and 90-percent of the work was done by Mike in his garage, while raising three children and attempting to maintain a regular life with his wife, Amy.

"I've been a motorhead all my life, it started with Hot Wheels and model kits and has extended into an adult hobby that I truly enjoy. When I bought my Trans Am it had headers and was lowered, that's it. I knew I had to put my own personal touch into it." Since 2006, when Mike bought the car from the second owner, he has been careful to make modifications that add to the WS6's personality without stepping over the line and taking away from the Trans Am's original intent. "Each year, a new project" was Mike's goal and for '06, he started with just a clutch install. In early 2007, Mike installed a Flowmaster exhaust and QTP electric cutout for when he wanted to "raise hell" and he was happy with that until he met John Rutan of Rutan Performance, who, like every master accomplice, helped push Mike along, further than he could have gone by himself. "I had John give the car a tune. That started a friendship and the beginning of building this car." In late 2007 Mike installed a Texas Speed MS4 camshaft, an LS6 intake manifold and an LS2 timing chain, which was enough to help Mike's WS6 lay down 423-rwhp on a local college's dyno. "It ran mid-11's, but I knew there was more..."

It wasn't until 2009 when Mike made the fatal mistake of heading to the LSX Shootout held in Memphis, Tennessee, and left the race with a laundry list of new parts that he just needed to have, no matter what. "I got the idea to narrow the rear end and go with a set of Billet Specialties Street Lite wheels. I sold my WS6 wheels in order to purchase the new wheels and the Moser 12-bolt rear end." Of course, the magic here is all in the width of that Moser rear, which Mike had cut 3.75-inches per side before having Moser stuff it with a 4.11:1 ring and pinion and a True Trac differential. "I wanted the deep dish look to distinguish my car from every other WS6." And deep dish he got, with a set of massive 17x11-inch Billet Specialties cut on a 4.5-inch backspacing wrapped in a set of steamroller sized 315/35/17-inch Kuhmo Ecsta XS tires. Creeping ever closer to completion, Mike would wait until the summer of 2010 to buy a FAST LSXR 102mm intake manifold, a matching throttle body and a set of as-cast Trick Flow 220cc cylinder heads, which bumped his horsepower up to 463 at the rear wheels. Unfortunately in the fall of 2010 disaster struck when Mike missed a shift at the drag strip and bent a couple of valves in his Trick Flow LS1 cylinder heads. For a working man on a budget, breakage like that could have easily ended the dream. But for a man on a mission, it was just a minor setback and, "So I began the rebuild..."

What Mike would end up with is the engine you see here, a Scoggin Dickey 413 cubic-inch "El Torro Grande" short-block, an engine built by Scoggin Dickey Performance Center using a stroked LS2 stuffed with a 4.100-inch Callies crankshaft, Scat I-beam connecting rods and Manley forged pistons. Never one to leave well enough alone, Mike decided to add a set of ported and polished All Pro 245cc cylinder heads to the new engine, along with a custom camshaft designed by Patrick G., which was cut on an aggressive 251/254 duration at .050-inches with .623/.623-inches of lift and a lopey 112 LSA. While waiting for his new engine to arrive, Mike took the time to tear down the front of his WS6 and painted the entire engine compartment gloss white, to help it match the gorgeous factory exterior, which he had restored using nothing but elbow grease and a couple days worth of his time. While under the hood, Mike hid the factory wiring harness that usually runs down the passenger side of the bay and managed to sneak a tubular K-member down below the factory frame rails, which he hung with a pair of Strange coilovers before dropping the new 413 cubic-inch bullet in place. At Big 3 Racing near Cleveland, Ohio Mike's new combination laid down a stout 520-rwhp and 457 lb-ft of torque on Big 3's in-house Mustang dyno, which was validation enough of how well the SDPC engine combination and custom camshaft really worked.

"I am very proud that my car is all motor, naturally aspirated and runs the times that it does." Those times, if you're wondering, were a string of 10-second passes, culminating in a best run of 10.83 at 129-mph with a 1.59-second sixty-foot using a pair of "old, used slicks." At 3,720-pounds in street trim and through a 6-speed manual transmission, that's a ride almost anyone would love to take part in, and for Mike it was the perfect way to end his 2011 season. "I look forward to many more years of enjoyment with this car," Mike told us, but for now he seems content with his 10-second, show-worthy and feature-bound Trans Am. Proof positive that you can't give up on a dream, no matter how long it takes to achieve and no matter how flighty the associate editor of your favorite magazine might be…

Check out this 1999 Pontiac Trans Am that has a 430cid LSX block, custom solid roller cam, Diamond forged pistons, and more. Take a look only at www.gmhightechperformance.com, the official website for GM High-Tech Performance Magazine!