ECS builds a sleeper fifth-gen with over 1,000 rwhp and perfect street manners 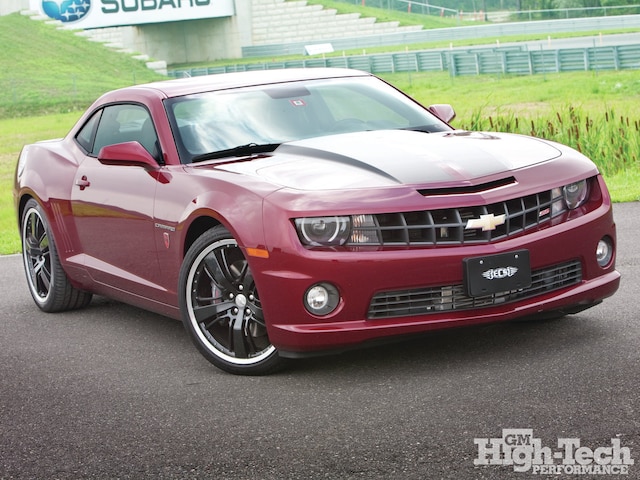 George Abad isn't one for colorful lights, wild body kits, shiny rims, or any other means to draw your attention. Instead, he enjoys sneaking up on unsuspecting targets like a panther wrapped in a '10 Camaro, which is why the 42-year-old Wholesale Grocer from Carlstadt, New Jersey, commissioned the crew at East Coast Supercharging to build him just such an animal. Once again ECS used one of its winning formulas to put together a streetable package worthy of its "Hardcore Edition" badges with over 1,000 rear-wheel horsepower. As if that wasn't impressive enough, Abad's Camaro accomplished this task using pump gas and methanol injection--just as he plans to use on the many street miles he has ahead in the Jewel Red 2SS.

Similar to its Corvette packages, the "Gen V" version sports an RHS block with a heavy-duty rotating assembly to give 427 cubic-inches of usable displacement, Mast Motorsports LS7 heads, custom hydraulic roller blower cam, and ECS's own supercharger kit--the center piece being a Vortech YSi head unit. The mammouth Mast heads swallow 19 psi of boost straight from the ECS front-mount air-to-air intercooler and into a factory LS7 manifold. ECS's custom "bigger blower camshaft" put peak power at 6,500 rpm and helps spin the YSi into its efficiency range using an ATI damper and 10-rib setup. A super reliable TiAL Q blow-off valve vents unneeded boost straight to the atmosphere, however, usable air is well sealed by a custom designed Diamond piston and Total Seal stainless ring package. The pistons create a curious 10:1 compression, and ECS maintains that the higher compression (compared to a more common 8.5-9:1) keeps some bottom-end torque in the combo, something a streetcar--particularly one as heavy as a fifth-gen--definitely needs.

With a blower capable of 1,600 cfm and heads capable of 388 cfm plus some large cylinders to fill, you can bet that plenty of other aftermarket components were needed to support them. ECS came up with a custom fuel system for the fifth-gen using a billet fuel hat that houses three quiet and street-friendly in-tank pumps. Converted to a return-style system, an Aeromotive regulator is boost-referenced for ample pressure at all times. ECS's Alky Control-based methanol injection kit provides additional fueling--mainly for the added octane. The mixture is regulated by the stock ECM that has been tuned by Doug Ring at ECS to operate in closed-loop speed density without a hiccup. Proof that sometimes a little back pressure is a good thing, the stock catback keeps a lid on the wild beast, though it does have the benefit of American Racing 17?8-inch long-tube headers and X-pipe. The stock catback was crucial for Abad to keep his sleeper status, and thankfully it didn't hold him back from hitting the magic four-digit number on ECS's Dynapack chassis dyno.

So far only a few other functional components, such as the TR6060 transmission, are stock, but with this much power only time will tell how long that lasts. An RPS triple carbon clutch provides the holding power necessary, while still being chatter-free and effortless. With the stock 21-inch wheels and Pirelli tires it takes little throttle input to break it loose, so hopefully a set of NT05R drag radials will help manage some decent track times later this fall. Though swapping the wheels or the stock Brembos would detract from the sleeper nature of this SS, Pfadt suspension is hidden enough to justify and quite necessary with this much power. Starting with the street coilovers and sway bars to counteract the brute power, solid subframe bushings and Pfadt's spacey trailing arms (and tie rods) help George from incinerating his IRS driveline while adding to the handling. Last but not least, the rear end was upgraded with The Drive Shaft Shop's 9-inch conversion using Strange Engineering components as well as a DSS one-piece aluminum driveshaft and 30-spline, 1400 HP "fatty" axles.

Everyone has a unique vision of their dream car. For some it might be a 1,000-horse Bugatti Veryon. But to George Abad, it is this '10 Camaro with a few hundred more horsepower and classic American styling. "I am a fan of American muscle, and to me this is the pinnacle of that design." And who are we to argue? The level of refinement and power potential of the LS platform is remarkable to be able to compete with the 16-cylinder, quad-turbo supercar albeit with help from methanol injection, a lumpy camshaft, and large centrifugal supercharger--all of which would never find their way into a production car. Nevertheless, a short ride in Abad's Camaro will tell you that ECS did a phenomenal job in building the ultimate streetcar that lacks the punishing compromises we have come to expect from a car this modified and this powerful.