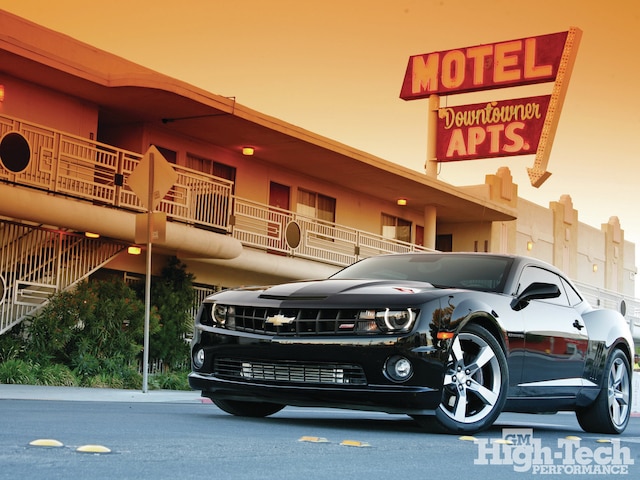 Seven miles outside of Las Vegas, Nevada, sits Nellis Air Force Base, a military compound home to some of the most radical and high-tech fighter jets in the United States military. Founded in the 40's, Nellis Air Force base played a pivotal role throughout World War II and, in 1967, the year of the first Camaro, Nellis became home base for one of the greatest air-show squadrons in the world, the USAF Thunderbirds. Today, Nellis still functions as one of the largest and most demanding Air Force bases in the country and is still home to some serious hardware, although not all of it is clearanced for actual take-off.

Take Aric Andrade's '10 Camaro for example. As an Air Force firefighter stationed at Nellis, Aric gets the chance to work around a plethora of powerful, amazing machines everyday and his love of speed has carried on to more than just his job. "When I got back from doing a five-year tour in Italy, I found out that the local Chevrolet dealers were taking pre-orders on the new Camaro and I said I need to get me one." After a grueling 9-months wait, Aric's black-on-black six-speed stealth fighter finally came in, but he didn't even have a chance to get it off the dealer lot before the modifications began. "I met Sam Smith," Fairway Chevrolet's Performance Tech and "even before I drove it off the lot it went straight to Sam for some basic bolt-ons, a camshaft, headers, air intake, and a custom tune."

Aric's Camaro arrived on base as a screamer, laying down 468-rwhp and 426 lb-ft of torque with less than 100-miles on the odometer. Of course, for a guy who spends his days in high intensity, adrenalin filled activity, 468-rwhp just wasn't enough. "A couple months went by and I got bored. I wanted more, so I went back to Sam and we laid out a plan for a ProCharger kit." When the dust settled, Sam and Aric decided on ProCharger's F-1D "race" system, which shipped to Sam with an upgraded front mount intercooler and all of the bracketry necessary for a complete bolt-on. While in the ordering mood, Sam and Aric also ordered a custom Comp Cams supercharger cam, that Sam had custom ground to his specifications and a custom fuel system, which the pair planned to run on E85.

774-rwhp later, Aric's Camaro was back on the road and ready to really heat up the hides. "I was happy for another couple of months but again, I wanted more." And again, Aric found himself back at Sam's, working on a plan to build a monster that could really get his blood flowing, something that could hang with jets on the runway and still hold its own on the Vegas strip. What the two twisted minds finally settled on was a fully forged 427 cubic-inch LSX that was built by Late Model Engines (LME) in Texas.

Starting with a GMPP LSX block, LME machined and installed a stout rotating assembly with parts from Callies and Wiseco and topped the short-block with a pair of GMPP LSX LS7 cylinder heads. With 9.59:1 final compression, the LME crew built the motor to take a ton of abuse and knew that Aric's desire for boost probably couldn't be restrained. With the motor shipped to Sam at Fairway, it was dropped back into the Camaro's chassis and dressed with a FAST LSXR 102mm intake manifold and a pair of Kooks 2-inch long-tube headers.

Now, Aric could have easily had Sam install the old blower and call it good, but you know that wasn't going to be the case. Oh no, the pair stepped it up again, ordering the massive ProCharger F-1R, which was built to accept a cog-drive belt for maximum boost with little-to-no belt slip. Behind the blown beast, Aric installed a McLeod twin disc clutch in the otherwise stock TR6060, and upgraded the axles to a pair from Hendrix Engineering. On the dyno, Aric and Sam set the F-1R to make 18 pounds of boost at full tilt and laid down the hammer. How does 912-rwhp and 831 lb-ft of torque sound? To Aric, it sounded like music to his ears and was the number he needed to see in order to be happy with his beloved 2010 Camaro. "I have to thank my wife, first and foremost. Also, the man behind all the madness, Sam Smith for all of his time and hard work he put into the car, and Fairway Chevrolet Speed Shop."

Word on the street says that Aric is finally finished with his Camaro and that he has been driving and enjoying it with over 900-rwhp on tap. Of course, coming from a town built on excitement and an Air Force base known for its top-secret nature, only Aric knows what the future holds for his black-on-black Camaro. All we know is that we would love a ride, especially if we could line it up alongside one of those Thunderbird F-16's on the strip and see who really rules the runway in Las Vegas...