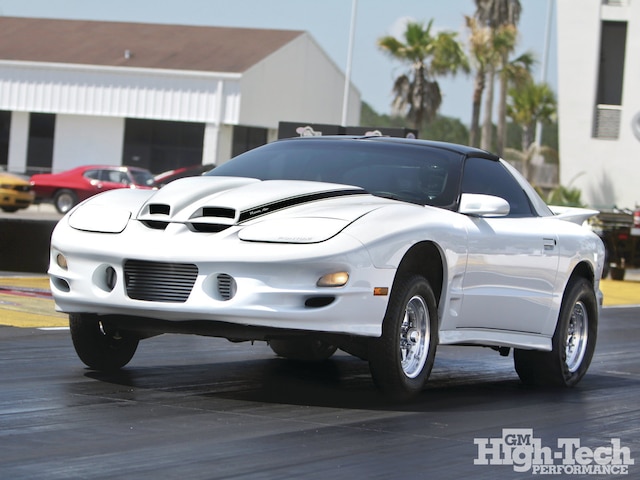 Sometimes the best things in life are the most simple. Lazy Sundays, original Nintendo, rental cars, homebuilt single-turbo fourth-gen Trans Am's, cold pizza, cold beer, the list goes on and on. Interestingly, for each one of life's simple pleasures, there is a complex and insane way to do them, take the latest 3DTV, XBox Kinect, online game-play, stand-up-and-swing-your-arms-around-nonsense for example. It's fun, don't get us wrong, but mostly the entire experience is spent trying to figure out the hardware and attempting not to break anything instead of actually having fun and enjoying yourself.

This life of over complication is true for cars too. Think back to the most fun you have had in a car and then consider the modifications done to it. For a good percentage of us, it's probably doing donuts in a nearly stock Camaro until the tires fell off or racing a reliable bolt-on car down the track for the first time, letting your buddies take it out and have some fun because you knew nothing could really go wrong. Don't believe us? Ask your friends with the high-horsepower, double-throwdown, completely custom cars what they would like to do next. We bet 10-to-1 that they are looking for a mildly modified car to just take out and have some fun with.

Unfortunately, even understanding these lessons, it is almost impossible to not get sucked into the crazy modification game. Let's face it, it's hard to show restraint, especially with an aftermarket as awesome as ours. Luckily, there are people out there with the skills and knowledge to build fun, fast cars that still require nothing more than some gasoline to run and play around with. Take for example this gorgeous white '99 Trans Am, owned and modified by Ryan Prentiss of Tallahassee, Florida. "In my opinion, purpose-built race cars are not for me. If you can't open the garage and drive wherever you want because it is a beautiful day out, there is not a point to building a car."

Ignoring the Turbosmart Race-Port blow-off valve and Turbonetics turbocharger wedged under the hood, Ryan's Trans Am doesn't give much away in the engine bay. To someone off the street, this may even look like a stock Trans Am with a crazy cold-air intake, although anyone in the know can tell that something is up. Unlike a "sleeper" that everyone is so excited about these days, Ryan isn't actually hiding anything from anybody and the engine that looks stock, actually is stock. That's right, this 108,000-mile LS1 still sports the stock crank, rods and pistons that it left the factory with and they have never seen a world outside of the engine block. The heads are a pair of "317" castings off a truck engine, which Ryan cleaned, inspected and installed by himself, along with a set of Patriot Xtreme springs. The camshaft is also a GM unit, borrowed from an LS6, which controls a set of stock rocker arms and allows the engine to make a little more power without sacrificing valve spring and rocker arm reliability. "Daily driving the car around town is a blast and you would never know what the car was capable of by just cruising around."

Cruising is one of Ryan's favorite things to do, so it should come as no surprise that his stock LS1 is bolted to a stock T56 transmission, which Ryan has never opened for any reason other then to put transmission fluid and a Pro 5.0 shifter in to it. He has managed to go through a couple of clutch and flywheel setups, finally deciding on a Monster sintered iron Level 6, bolted to a billet steel flywheel. A PST 3-inch chromoly driveshaft sends power through the length of the chassis, where it spins a 3.70:1 ring and pinion stuffed in a Moser 9-inch rear end. Yes, this is a budget build and one that features a ton of stock GM stuff, but you had to know the stock 10-bolt rear was long gone, probably the victim of a clutch dump with way less horsepower. "The car has gone through various stages since I have owned it. It was a bolt-on car for a few years running in the low 13's. Following that the car got a 224/224-duration, .581/.581-inches of lift camshaft on a 112 LSA, which brought it into the mid 12's in street trim. For some reason though it never really woke up until I put a set of Patriot 5.3L heads on it and swapped to a 228/230-duration cam. The car just got much stronger and ran a best e.t. of 11.4 and best MPH of 124.5. After losing a couple races to a friend in an LS1-swapped third-gen RX7, I threw a Nitrous Outlet single nozzle 75-shot on which dipped it down to a 10.74 at 128 mph. Paying too much for nitrous locally and battling low bottle pressure during random street pulls got really old really fast and after spending entirely too much time in the forced induction section of LS1Tech.com, I decided it was time to step up."

This is where Ryan's build gets really interesting and it is also the reason you see this car on these pages. Instead of going bananas and building a new motor, installing a radical turbo kit and sacrificing everything he loved about cruising, Ryan took another approach, building a solid turbo system without breaking the bank or his car. "I spent countless hours looking for parts and sales. Good condition used parts were purchased where applicable, budget parts were purchased where they would not sacrifice quality and if a factory or stock part could work as is or could be modified, it most certainly was. Three of the items I refused to cut corners on were the turbo, blow-off valve and wastegate and I found great deals on those too."

That turbo is actually a TC76 from Turbonetics, which Ryan feeds hot exhaust gas from a set of 6.0-liter GM truck manifolds and a merge built from 2.5-inch aluminized steel tubing. To control boost on his homebuilt setup, Ryan scored a TiAL 46mm wastegate, which runs a .7 Bar spring, enough to make right around 10 pounds of boost at full tilt. To keep everything cool, Ryan mounted a CX Racing "eBay" air-to-air intercooler up behind his bumper, which feeds air back to the intake manifold through a set of 3-inch aluminum pipes, which Ryan also fabricated and laid out in his one car garage. "I began gathering parts and almost four months to the day after teardown I fired up my TC76 front mount turbocharged Trans Am. It had been awhile since I had really turned any wrenches on my car, so it was great to get back to working on it again."

Fortunately, Ryan hasn't really had to work on it much since, but we're not sure he is itching to tear it down quite yet. "There is zero lag and the turbo hits 10-pounds almost instantly. The open downpipe coupled with the dumped wastegate makes me almost forget how much I miss the sound the old camshaft had at idle." On track, Ryan's simple homebuilt Trans Am is a rocket, leaving off the two-step at 5,000 rpm and launching violently to a 1.56 sixty-foot and running out the back in just 10.4-seconds at 133.6 mph. In the Gainesville heat, Ryan simply checked tire pressure and popped the hood between rounds, without a hint of worry or a care in the world. What he set out to build; a simple, easy to use and insanely fun streetcar, is exactly what he got.

"I remember when I was younger and first bought my Trans Am, reading about boosted LS1 F-bodies and being completely amazed at the performance the cars produced. I was able to build one in my one car garage that keeps getting faster and more fun to drive. It is a never ending but rewarding challenge that keeps me on my toes every time I drive it." Ryan has threatened to do more work to the car, including a forged bottom end, more fuel and more boost, but for now he is simply enjoying the awesome factory-based combination that he set out to build. Maybe he will even keep it this way forever, a classic combination that will go down as the Goldeneye of the LS1 market—fun, simple, classic and awesome .

Mike Hawkey's 96,000-mile 1999 Pontiac Trans Am WS6 took over 5-years to reach its pinnacle and 90-percent of the work was done by Mike in his garage. Click here for more details or check out the April issue of GM High-Tech Performance Magazine

Check out this 1999 Pontiac Trans Am that has a 430cid LSX block, custom solid roller cam, Diamond forged pistons, and more. Take a look only at www.gmhightechperformance.com, the official website for GM High-Tech Performance Magazine!