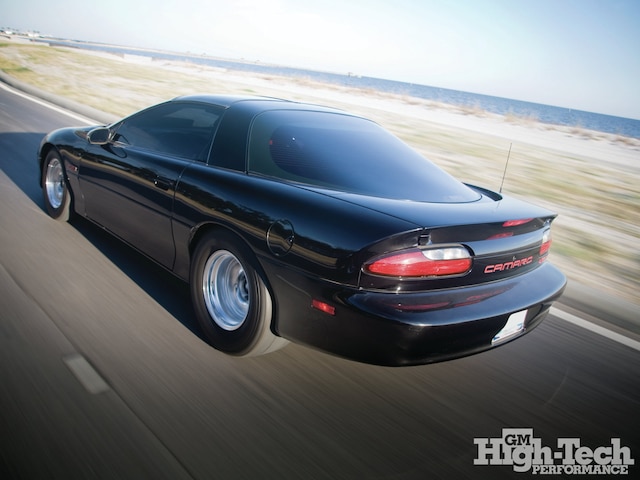 At some point we've all done it. We've taken a perfectly fun and enjoyable streetcar and ruined it. The air conditioning is the first to go, then the power brakes and steering, and the next thing you know you can't even start the thing without another jug of race fuel, a blower belt, fresh set of spark plugs and ear plugs. This is exactly why we can appreciate David Driver's restraint when building his '94 Z28. His goal was to go mid-10s on pump gas without forced induction in a car that he could put 400-500 trouble-free street miles on in a weekend. While the road was long and sometimes difficult, with a little help from his friends he made it happen.

Back in 2002, David traded his last Mustang for this (then) six-speed Camaro. After some hard miles and hard passes the LT1 gave up the ghost, and so began the journey of rebirth. Using a Corvette block for its four-bolt mains, a 383 short-block was put together by David after being machined at nearby David's Machine Shop in Theodore, Alabama. Using a balanced 4340 forged rotating assembly from Eagle, topped with Wiseco pistons, the new motor would make over 460 rear wheel horsepower. Of course making these kind of numbers with an LT1 meant a lumpy solid roller camshaft, from Bret Bauer, as well as a serious heads and intake setup. Since there were few to no LT1 heads at the time capable of the flow David was looking for, he had the machine shop convert a set of 23-degree, Racing Head Service 235cc SBC heads for the Gen II block. The RHS heads, with Ferrea 2.02 intake and 1.60 exhaust valves, were then sent out to LT1 guru Lloyd Elliot for a full port and polish. These heads necessitated an Edelbrock Super Victor intake that was plumbed for EFI by IntakeElbows.com and mated to a Holley 1,000-cfm throttle body. Keeping the solid roller setup happy is a Melling hi-flow oil pump, Canton pan, and DRE shaft-mount rocker system.

After figuring out the motor setup, the real fun became tuning a 12:1 LT1 for pump gas with such a substantial cam, using the stock PCM. Thankfully Ed Wright of Fastchip came to the rescue, employing an SLP 85mm MAF, 42-pound injectors fed by a massive Aeromotive A1000 pump, Accel ignition box and coil. Hedman 17?8-inch long-tubes do the post-combustion work, mated to a Mufflex 4-inch exhaust system. Between the fuel pump and the big pipes, David and his friends put plenty of time into tucking the Magnaflow muffler up close to the floor pan to keep anything from hanging low in an effort to keep the car street-friendly. Perhaps the most time-consuming, though, was the homemade mini-tubs. Countless hours were put into trimming the sail panel over the tubs, so that it wouldn't be visible in the interior to say nothing of cutting the body, making the wheel tubs, and welding them in. But this allowed him to narrow the Moser 9-inch rear by 3-inches per side and run a meaty 325mm drag radial on a set of Centerline 15x10s. Well worth it.

The suspension utilizes a combination of Global West and Spohn components that ride nicely using Koni double adjustable shocks in the rear. QA1 coilovers up front help give the Camaro a healthy stance, and the use of a Baer bump steer kit also keeps the ride quality in check. Using a built 4L60E, from Cahall Performance Transmission, and a Precision Industries 3400-stall converter the LT1 cuts an impressive 1.43 short time. With 4.11 gears and 31-spline axles, the solid roller motor hits the meaty Mickey Thompsons hard, but David assures us it only takes one finger on the wheel going down the track. Just in case, a Wolfe bolt-in chrome moly rollbar and five-point harnesses are there for support.

Speaking of support, the former mechanic credits his friends Doug Phillips, Greg Smith, Howard Byrd, Robert Clifton and Rich Bacon for their roles in building the car. David called this a true "buddy project," as some may have helped physically while others provided the mental support when he was frustrated and ready to quite. As David would say, women came and went, but the car stayed...and so did his true friends. And whether it is the local car show, drag strip, Hot Rod Power Tour, or (his favorite) Cruisin' the Coast, you can bet he will be enjoying the company of friends and his trusty Z28 for years to come. Though he did ultimately accomplish his goal, running a 10.58 and still (street) driving some 9,000 miles (even in 100-degree Alabama heat), they say it's about the ride and not the destination...and I couldn't be more thankful to David for reminding me.

Read all about this fully customized 1994 Chevy Camaro Z28 and the LT4 engine that powers it. Only at www.gmhightechperformance.com, the official website for GM High-Tech Performance Magazine!

Read all about this awesome 1994 Chevy Camaro Z28 owned by one of our readers. Only at www.gmhightechperformance.com, the official website for GM High-Tech Performance Magazine!

Read all about this incredible 1994 Chevy Camaro and the twin turbos that power it. Only at www.gmhightechperformance.com, the official website for GM High-Tech Performance Magazine!

Ralph Sotello could be the first person to build 1994 Chevy Camaro "Grand Sport", yes that's right, with a LT1 engine and everything that makes the Corvette Grand Sport a Grand Sport. - Camaro Performers Magazine

Duane Cubberley's 1994 Chevy Camaro is a fast ride with not much getting in the way and usually runs in the 6-second index class, so watch out for him at the dragstrip. - Camaro Performers Magazine

Check out this 1994 Chevy Camaro Z28 which get a radiator upgrade. Only at www.gmhightechperformance.com, the official site for GM High-Tech Performance Magazine.