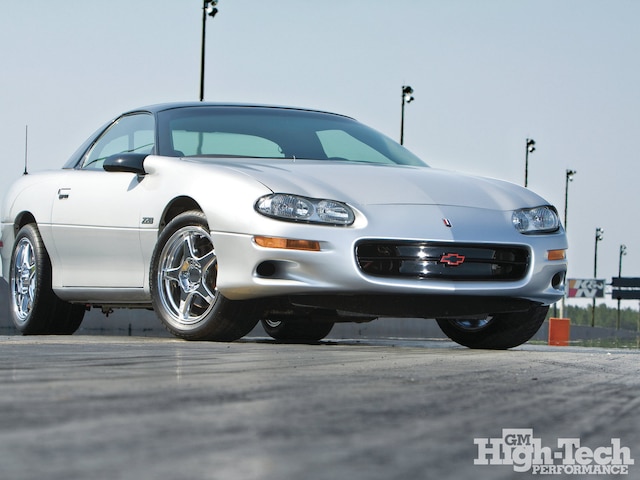 I was on my way back from Atlanta Dragway, sunburnt, tired and completely worn out from three days of covering the wild LSX Challenge race (stay tuned for coverage next month). My mind was cluttered and overflowing with images of insane combinations, trailered hundred-thousand-dollar race cars and long nights watching competitors swap out expensive parts for other expensive parts in search of another 100th of a second advantage. Contemplating an early retirement, or at least a long vacation, I turned into South Georgia Motorsports Park, my brain and body completely done with the high dollar machines of the past week.

As I drove through the South gate at SGMP, I saw just one car sitting in the staging lanes. Alone and simple, Andy Carter's '99 Z28 sat on a set of shiny ZR1 wheels wrapped in street tires, and Andy was just putting the finishing touches on the wipe down process. Walking closer, Andy's Camaro looked immaculate, but also almost completely stock. The silver paint was in great shape, the flat Z28 hood and wing in perfect condition. Inside, there was no rollcage, no power windows, no power locks and just a set of simple and stock cloth seats. "It's a 1LE... basically a stripper Z28 which was exactly what I was looking for," Andy told me. Besides the Nitrous Outlet bottle sitting where the back seat would normally go and the Hurst shifter rising from the center console, it was impossible to tell how fast this car really was. If someone had asked me what it ran, I might guess 12.0's on a good track. "This car looks like the average Z28 sitting in the Wal-Mart parking lot until I swap over the tires..."

Under the hood, Andy's Camaro looked as basic as could be, with the only obvious addition being a 78mm Nitrous Outlet plate system and an MSD digital window switch on the passenger-side strut tower. The engine looked like a typical LS1 street car, with an old school LS1 Motorsports lid feeding air into a stock mass air meter and a stock LS1 throttle body. Andy did switch out his stock LS1 intake manifold for an LS6 piece, which he stuffed with a set of '02 28 lb/hr injectors, but neither of those modifications really tip anyone off to the power of this combination. For cylinder heads, Andy relies on a set of stock 853-castings (certainly not the best performing of the bunch), which are bolted to a pair of unknown long-tube headers and a Magnaflow exhaust system.

So, stock looking motor with a nitrous kit, a couple of average bolt-on parts and no roll cage. We're featuring this...why? Oh yeah--Andy's 1LE Z28 runs 9.97 at 133.4-mph on a 1.35-second 60-foot time and he drives it to the track like this. That's right, this stock appearing, stock bottom end equipped sleeper Z28 runs a 9.97-second quarter-mile and does it with no nonsense, no ridiculous idle, no drama and no trailer full of spare parts or new engines. 9.97! This is a breath of fresh air bundled into a street car and its magic comes from a few perfectly placed parts, a set of nitrous jets and time spent researching and tuning.

Now, we should come clean. The motor that looks stock with the 853-casting heads does have one modification done to it. Andy has installed a Texas Speed Torquer 2 camshaft in place of the stock unit and, well, that's all. Stock pistons, rods and crankshaft. Stock head gaskets, bolts and coils. The plugs are a set of NGK BR8EF's on a tight gap and other than that, the engine is as it came from General Motors twelve years ago. It's even got 51,000-miles on the odometer, so clearly it isn't just taking up garage space.

Behind the engine, well, that's a different story. While the Camaro started life as a six-speed manual transmission, "I wasn't really happy with the six-speed and the track performance, so I swapped to the TH400 and had Greg at FTI build me a nitrous converter." Bolted behind the basically stock mill is a TH400 transmission built by Hughes, which Andy stuffed with a custom-built FTI nitrous-ready torque converter that stalls to approximately 4,200 rpm. Out back, Andy ditched the stock and easily broken 10-bolt rear for a Moser 9-inch unit, which he bolted together with a 3.75:1 ring-and-pinion. Andy had tried to keep the differential street friendly at first, but after breaking an expensive differential early on, he installed a much cheaper and more effective Moser spool, which still "drives great on the street."

Regarding the suspension, Andy's Camaro continues the theme of keeping it simple with a set of Strange double adjustable shocks up front wrapped in a pair of 300 lb/in springs. The stock K-member and A-arms are still in place and besides the front sway bar being removed, everything else is in the same place that it was when GM put the Camaro together. Out back, the Camaro has a matching set of Strange double adjustable shocks, although like many experienced racers, Andy kept the stock rear springs in place. UMI Performance is responsible for the flat launches and Andy counts on the UMI anti-roll bar and tunnel mounted adjustable torque arm to keep his 60-foot times in the mid 1.30-second range.

Looking for more crazy stuff? You better move on because Andy hasn't added or taken away anything from this ride that didn't help him go fast and look stock. "Remember, this car is driven to and from the track at all times. This has always been a condition of mine that I would keep the car streetable and it would not turn into a trailer queen. This car looks like the average Z28 sitting in the Wal-Mart parking lot until I swap over the tires, bring the bottle pressure up and launch it off the transbrake on the 250 shot, pulling both front tires. That's when the on-lookers start coming over to ask questions." If you're one of those on-lookers, intrigued by Andy's 9-second Z28, feel free to find him at the track or online, as Andy is truly one of the nicest and most sincere racers we have met in a longtime. He is humble and willing to help anyone who shares his passion and it is that attitude, along with his killer 9-second sleeper that makes him the perfect GMHTP feature and is the reason we keep combing the country, driving from state to state, looking for cars of this caliber, sunburn and sleep be damned!

This car looks like the average Z28 sitting in the Wal-Mart parking lot until I swap over the tires, bring the bottle pressure up, and launch it off the transbrake on the 250 shot