2011 Chevy Camaro - What Dreams May Come 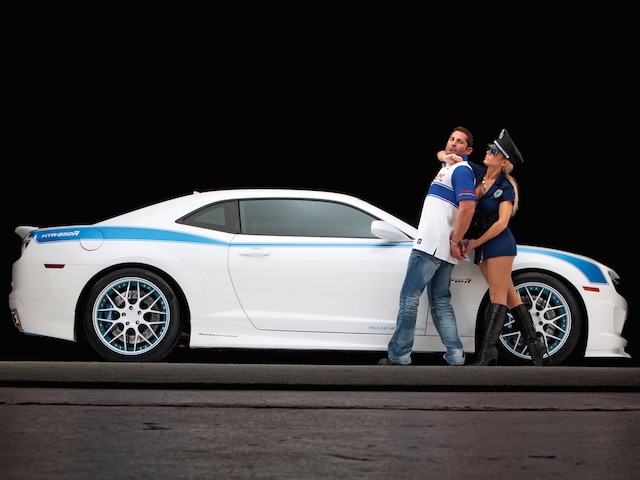 Howard Tanner sat up in his bed, woken abruptly in the middle of the night, frantically searching his night table for a pen and something to write on. White, blue stripes, Forza Forged wheels, Brembo brakes. In and out of consciousness. Uh, oh—a heritage grill, ACS front fascia and hood. I should color match the wheels, yeah, that would work. This is perfect, he thought, but now I can't sleep.

The next day, Howard marched into his shop, Redline Motorsports and assembled his team. "I woke up in the middle of the night and knew exactly what the Camaro was going to look like. I told them the plan and I told them, unlike every other build, that I didn't want any suggestions on this one." Howard had decided to literally build the car of his dreams and, as if that wasn't enough, he wanted it to be finished in time for the 2010 SEMA Show in Las Vegas, which was just six weeks away. "I couldn't build it fast enough..." Luckily, for a guy like Howard, fifth-generation Camaros aren't very hard to come by and he just happened to have a brand-new Summit White '11 Camaro in the shop, just waiting to be torn apart, stripped, and completely re-done to complete his dream.

First up, Howard had to make the Camaro look great, so he drove it down to Caprara's Autobody in Troy, New York, and immediately jumped on the phone to order a special ACS hood and front fascia, to be delivered as soon as possible to the shop. After all, he knew the show was rapidly approaching and the paint and body crew had a lot to complete in a short amount of time. "We started with the solid Summit White Camaro. Anthony Lanaro, the head painter at Caprara's laid out the stripes several times before we liked them and custom tinted the paint to our liking." The blue you see on the wide center stripes and on the custom side stripes was a color called Liquid Crystal True Blue by PPG, which was laid out and then coated in three additional mid-coats of Aqua Marine paint, with a light sanding in between coats, to ensure a flat surface free of paint lines or blemishes. "You can't really see it in the photos, but in person the entire car pops thanks to the blue tint coat. Caprara's did an excellent job!"

To help offset the wicked paint scheme and wild ACS body pieces, Howard had Forza Forged build him a set of 20-inch FRZ-950 wheels, which he also had painted to match the blue stripes of the car. Behind the wheels, Howard decided to step up the factory brake package as well, adding a set of Brembo six-piston Monoblock calipers which were, as you guessed, custom painted to flow with the rest of the scheme. Completing the look, Howard added a set of Pfadt coilover shocks to help him set the ride height, which was essential to setting the stance and overall tone of the Camaro.

Now, this is GMHTP and you know we're not really much for the all-out show car stuff, so you're probably expecting a pretty serious engine package under the hood. Howard was too, and his hand-built Kenne Bell blown 427 makes 840 rear-wheel horsepower, which is just the kind of thing Redline Motorsports had built a reputation on. Part of the HTR-850R package, Howard began the engine build with an LS7 engine block, which he forged with the finest components from Callies, JE, and Oliver. To achieve a pump gas and warranty friendly 9.3:1 compression ratio, Howard topped the engine with a pair of ported LS9 cylinder heads, which feature 2.08/1.63-inch valves that articulate above a 232/244-duration hydraulic roller camshaft.

Of course, a 427 with ported LS9 heads and a custom camshaft would probably be enough for some, especially on a tight deadline, but Howard thought another 3.6-liters of displacement would really help set things off and look great under the ACS clear hood window, so he topped his engine off with a 3.6-liter Kenne Bell twin-screw supercharger and a custom 8-rib pulley system. The results speak for themselves, both aesthetically and functionally, as the '11 Camaro can lay down 840 rwhp and 825 lb-ft of torque without much effort at all. "The HTR-850 has huge torque for a heavy car. It has big yank on the big end and handles like it is on rails!"

But, maybe you're still skeptical that this is just another dyno-queen SEMA car. Valid concern, although Howard tells us that it has already ran a 10.12 at 143-mph on the 20-inch Pirelli tires and Forza Forged wheels! That's a 10.12-second quarter-mile on a 2.10 sixty-foot time, which is truly incredible for a full weight, SEMA award-winning Camaro and even more impressive considering the fact that Howard's dream Camaro came together in just six short weeks. That's incredible for any builder, but especially noteworthy for one who woke up in the middle of the night, scrawled down some lucid notes, and set a team of builders in motion without any hesitation. Of course, for Howard Tanner, much of what he does is considered crazy, so dreaming up supercars in his sleep may not seem like such a big deal. For us, we just can't wait to see what he can dream up next!