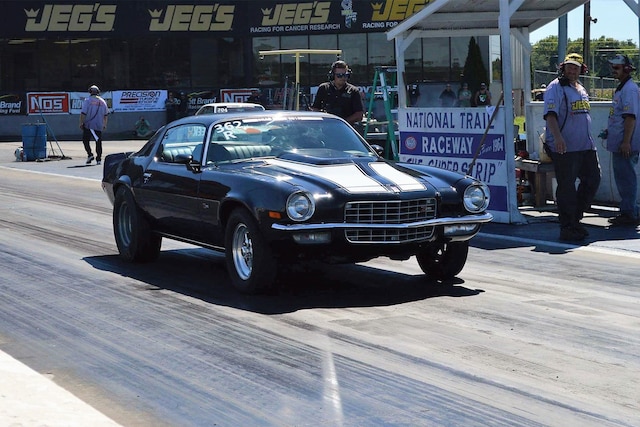 The Gear Vendors HOT ROD Drag Week, powered by Dodge, brings together families better than any therapist. Brothers Bill and Kyle Scheel hail from Utica, Michigan, and their father, Bill Sr., introduced them to all things Chevy at a very young age. He had a 1972 Chevy Nova that he had introduced the boys to drag racing with from early on. Back in 2003, their father bought a 1973 Chevrolet Camaro that had seen some better days, but would suit the family well. Kyle took his driver's license in the Camaro and Bill was racing it one week after getting his license.

The 73 Camaro in the lanes

Since they got the car, it had been raced and driven a lot, but it was parked for the last six years. Over the summer of 2016, the Scheels got the Camaro ready for Drag Week by replacing and going through most of the rubber lines and fluids, and performed some much needed maintenance to the old Chevy.

The car currently has a mild 355ci small-block built by Bill Sr. under the hood, the stock 10 bolt resides out back, and a TH400 transmission hides between the two. The basic, cheap, and simple setup runs the car down the track for brisk mid 13-second passes.

Bill Sr. had wanted to do Drag Week for years while dreaming of the challenge, the racing, and the thrill of competing in the ring with the baddest street cars in the world and as time went on, Bill's health began to fail and he added Drag Week to his bucket list of must do items. After the tracks were announced for 2016 it became the priority for Bill and his two sons to compete in Drag Week together as a family.

Waiting for help with a broken starter. But no Drag Weeker is left behind. The Swedes were able to help get the Scheel boys back on the road by offering up an extra starter motor.

Unfortunately for the Scheel family, fate would say otherwise and Bill Sr. passed away in February last year. This was both a huge blow to the family and getting the car ready as Bill Sr. was the lead mechanic, but in many ways his passing was the biggest ingle motivator for the boys to get the car together and run Drag Week.

After losing their father, they pressed on and had to learn quickly about what to do and how to do it when it came to running car. Filling in the gaps of knowledge was challenging but rewarding. As the deadline for tech inspection got closer, they managed to get the Camaro running, driving and most importantly, safe again. Its previous life and down-time parked hadn't played nice on the Chevy's rubber parts, brakes and other key pieces.

Once they made it through tech inspection and on to the road on day one, the starter motor gave out. No big deal as they had brought another -- or so they thought. After swapping the new starter on the car on the side of the highway at 11pm in front of Summit Motorsports Park, they got in the car and hit the key. Nothing, the new starter was also dead. Fortunately this is Drag Week, and no racer is left behind. Jimmy Klaavuniemi and the boys from Sweden in the 1966 Chevy Bel Air arrived and luckily had an extra starter motor to get them rolling again.

Bill Sr., Bill Jr., and Kyle Scheel. The family who races together stays together.

The Scheel boys competed in Drag Week in honor of their late-father this year and successfully made it through the five-day torture test. The pair never had a dream of winning, they never thought of being the show; instead, they focused on finishing and having fun. After finishing they hope to return next year, but this time with both the Camaro and their father's 1972 Nova.