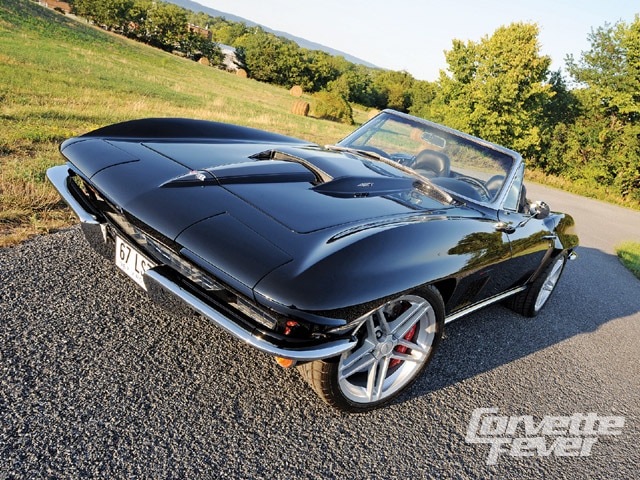 We've said it before, and thousands of Corvette lovers agree: The '67 Sting Ray was likely the closest of the Midyears to perfection, given that its fifth-year-of-production status led to the best build quality at St. Louis Assembly, and given many Vette devotees' fondness for the '67's styling and powertrain choices. So, how does one improve on that?

Jeff Cleary decided to go the Vette Rod route when he decided to build his '67 Sting Ray convertible. But the car that you see here didn't start with the first "project-ready" '67 that he bought. "The first car that I purchased, to build this car, I ended up re-selling it," he says from his Chesapeake, Virginia, home. "That's because it had some rust damage in it, and I didn't want to go through the expense and the time repairing it. That's because it really slows down the build, along with costing more money, because those things are very tedious and time-consuming to try to get done correctly."

A further search led him up to Maine, where the Corvette that he found that far away from home was far away from perfect-or intact. "It was just a cowl-back kind of derelict car," says Jeff. "The bonus of this thing was that the 'birdcage' was very good. It had actually been stored inside a garage, so that the birdcage was in excellent condition." Instead of going the restoration route, Jeff decided early on that he would Vette Rod it, taking advantage of later-generation Corvette chassis technology. As Jeff puts it, "I wanted to use the new suspension-I wanted a higher-performing suspension and a much better ride, as well."

With that decision made, an aftermarket frame would replace the original one. Jeff chose SRIII Motorsports' round-tube C2 frame, and he has no regrets at all about making that choice. "Hands-down, they're probably one of the best vendors that I used during the build," Jeff says without hesitation. "Mike Stockdale-as I see in the magazine all the time-anybody and everybody who's ever dealt with him has given him rave reviews on his product and how great the customer service is." Another reason why Jeff picked SRIII's frame was that it was up to the job of handling the power of Jeff's chosen engine. "I definitely didn't need anything that would turn into a pretzel," says Jeff.

And what engine did Jeff choose? How about a very-early-production LS7, one of the early ones out of The General's Performance Build Center in Wixom, Michigan. "I managed to get that through Davidson Chevrolet, up in Canton, Connecticut," Jeff says. "I know the owner there, and he managed to use a little persuasion to get one of the early-release engines." Jeff had a few upgrades in mind for the LS7-namely custom MSD ignition wires, a Katech "Torquer" hydraulic camshaft, and relocated coil packs.

But one big upgrade was made to the engine bay-it was modified to fit the factory Z06 air bridge. Unlike on most Vette Rods where the air cleaner is a 90-degree elbow and filter element off the throttle body, Jeff's '67 pulls fresh air from behind the grille to produce maximum horsepower. This required building a custom radiator core support and designing/building a hood hinge system that lifts the hood "up and out" over the header bar, much like that found on newer Corvettes.

To some observers, that upgraded LS7, and the custom three-inch, Flowmaster-muffled exhaust system it breathes through, make up the only sound system in the car. Not so, says Jeff. "We hid the system in the rear compartment behind the convertible top and fabricated a cover for it which houses the subwoofer and the two rear channels-there are two front channels, the two rear channels and the subwoofer. The entire system is driven from a 40-gig iPod and an Alpine 5 channel amp."

Whether or not that iPod is plugged in, what's it like when Jeff plugs himself into his '67 and takes it out on the road? "It's kind of like Jekyll and Hyde, because it rides so nice and feels like a new car but then you stab the throttle and the response is ridiculous...borderline violent," he says. "The car weighs just over 3,100 pounds, and it produces over 560 rear-wheel horsepower-which is about 620 horsepower at the flywheel. It doesn't matter what gear you're in, it's just a rocket!" Almost like being launched off an aircraft carrier? "Next to it," the former Navy man-a veteran of many catapult-assisted takeoffs from carrier flight decks-says with a laugh. "It's definitely a quick ride."

Are you planning on building a fine ride like Jeff's Midyear? "I'd hate to think that someone would start with something worse than I did," Jeff says. "I'm echoing a lot of the same things that Rich Lagasse said and preached with his Split Personality C2. That is, try to find the most complete car you can, one with no more parts on it than what you want, but no less than what you should get, including all the trim and the hard-to-find parts. You can really get into trouble quick, in terms of cash, to try to obtain all those things."

And, as Jeff shows us, staying out of that trouble while building a Vette Rod like this is one way to make the '67 Sting Ray "more perfect."