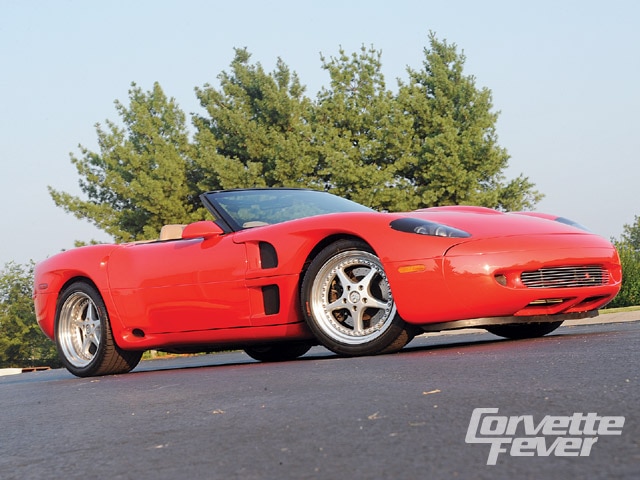 If you're a long-time reader of Corvette Fever, then you've seen this car in these pages once before. It was in May of 1995, when we first brought you the story of the Guldstrand Specialty Vehicles' Corvette Nassau Roadster. As some of you may recall, in the early '90s Guldstrand created their version of the Ultimate Corvette, the GS-90, starting with a four-cam LT5-powered ZR-1 and adding unique carbon-fiber bodywork along with extensive upgrades to the chassis, suspension and brakes. However, the GS-90's price tag-which included a $134,500 premium over the ZR-1's $66K-plus base sticker price-was a bit much for even top-end Corvette enthusiasts, plus there was also call for a convertible version of the GS-90. As the ZR-1 was only offered on the C4 coupe, Guldstrand used the base C4 Corvette convertible to build the Nassau Roadster.

This particular Nassau is No. 001, the handbuilt prototype that you saw here in 1995. Last year, it crossed the block at the Mecum Auction held during Bloomington Gold. That's where Steve Coffey saw it-and fell in love with it. "I wasn't looking to pick up a car at all," he says from his Crossville, Tennessee, home. "I don't have adequate storage for all the cars I have now!" Steve adds that when he saw it in Mecum's tent, it caught his attention in a big way when his friend Larry (Satch) Conatser pointed out that it was serial number 001. He'd read about the Nassau before, but all he'd seen were pictures of a blue one. "When I saw this one, it was interesting because of how rare it was, and also because the story behind it," says Steve. "Dick Guldstrand was commissioned by GM to build it as a prototype. It's the first one he did, and it has the serial number 001 badge on it."

C4 devotees know there was plenty of good stuff on the '95 Corvette, even before the Guldstrand touch went in. Under the hood was the 300hp LT1, introduced a few years before. At each corner were the big rotors and calipers that had been the heart of the ZR-1's braking system. Newly-upgraded sport seats, plus a dashboard and gauge panel which had been redesigned a few years earlier, rounded out the OEM features that stayed on the Nassau.

Let's let the Nassau's co-creator, Dick Guldstrand, pick up the story. "The whole concept of the Nassau was to continue the ZR-1's LT5 engine," he says from his Guldstrand Motorsports shop in Burbank, California. "We got the GS-90 done, and it was an absolute hit worldwide. It made the magazines all over the world (including Corvette Fever), but it was a little too expensive. We built a very few, just for very special people, then we realized that we could make a roadster for less. This was after we'd built some of the GS-90s." Dick says that his collaborator on the GS-90, Steve Winter, suggested they do the drop-top version. "He said, 'Why don't we do a roadster without the LT5 engine, using the standard engine, and not change all the suspension on it, and make it much-less-expensive by just doing the bodywork.' So, we went ahead and redesigned the coupe into a roadster."

Winter, a friend of Gullstrand's who was then an instructor at Pasadena's Art Center College for Design, and Detlef Stevenson-who made the carbon-fiber body panels-combined their talents to turn the GS-90 body design into the Nassau roadster. "I was in awe of the car," says Dick. "When we finally did the first one, I couldn't believe that we did it, it was so beautiful. I was so proud of it." He adds that he had lots of confidence in Steve, who he calls an "absolute talent." Dick adds, "We argued over a lot of things about it, but he'd always win out."

One thing that did go into this Nassau: a Vortech supercharger, which Steve says puts out around 420 horsepower while running ten pounds of boost. Between the GS-90 and the Nassau, Dick says he learned one important fact. "We know how to make a small fortune building special cars: Start with a very large fortune, and it works every time."

They also made a car that was very wide-so wide, in fact, that owner Steve Coffey can't fit his Nassau into his trailer. "We did that because we used the base package from the GS-90," says Dick. "We had to have those big tires on it because of the GS-90s horsepower and torque." While Nassau No. 001 is too big to fit into his trailer, Steve says that it fits into his collection of exotics and ultra-high-performance cars (which includes some Lingenfelter Corvettes) very well. "I like the rare ones, and I like the first ones built, with the serial number 001. In my collection, I have four going on five supercars with serial number 001. I call my collection 'The First Supercar Collection.'" And what's Nassau No. 001 like to drive? "It's very sporty for the time period when it was built, in the mid '90s," he says. "Most of the Corvettes back then were in the 300 horsepower range." With an estimated 420 horsepower available, it's not as strong as his 725-925hp Lingenfelter's, it's as much a grand touring car as it is a pavement-pounder.

Despite Guldstrand Specialty Vehicles' efforts, the Nassau and GS-90 were destined to have short production lives. That's because the GM executive who'd green-lighted the project took early retirement, and his successor decided that The General's resources would be better used on the upcoming, all-new C5 instead of on a special version of the soon-to-be-replaced C4. Production totals for the Nassau number eight other convertibles, along with this prototype-more than the number of GS-90s that were built (six).

If you're looking for one of the other Nassau's to add to your collection, here's Dick Gullstrand's advice: "Get the latest chassis style you can. In the early ones, I didn't like the dashboard, but we did a couple of those with the superchargers. They were fun and exciting, but there was that old, flat C4 dashboard in them. In 1992, Chevrolet made a really nice dash and interior for the Corvette, and that made it much nicer-looking convertible. So, anything past '92-'93 with the new dash, in my humble opinion, is more acceptable."

Take a look at the legendary GS90 by Dick Dick Guldstrand! This 1995 Corvette GS90 is one of five in existence and is owned by Charlie Budenz. It is definitely a memorable car created by a legend.