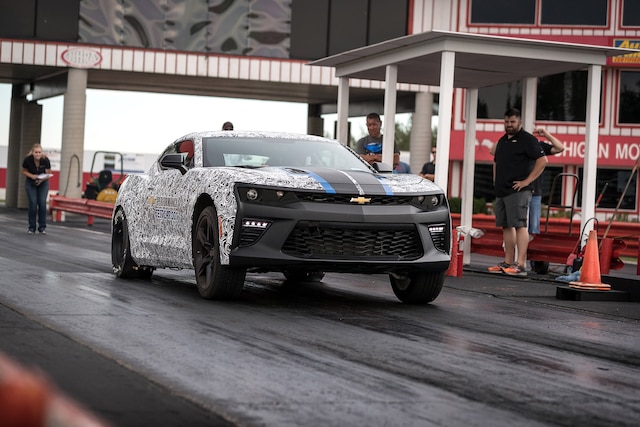 One of the first things we did when we got behind the wheel of a 2016 Camaro SS was hit the dragstrip. The new 8L90 automatic transmission proved to be quicker than the manual, even with a talented driver at the wheel. Careful launch techniques and judicious application of the throttle netted us -mile ETs in the low 12s, very respectable for a naturally aspirated V8 pony car. Of course the factory Camaro SS was just a starting point, there's always a little room for improvement. The Camaro SS Drag Race Development Program was created within Chevrolet Performance to build a drag race capable Camaro that can handle hard launches with added horsepower and validate parts that would shave the most time from 60-foot times and elapsed times. The swirl-camouflaged test car, first shown at SEMA 2016, borrowed the propshaft, and half-shafts from the Gen 6 ZL1 and had more than 100 launches under its belt. The 250mm (9.8-inch) ring gear used in the differential of the fifth-generation Camaro ZL1 helped earn it the nickname "gravedigger" because it just couldn't be destroyed. As equipped in the fifth-generation Camaro, its 3.73 ratio proved too low for optimal 60-foot times when combined with the eight-speed automatic transmission from the sixth-gen.

Of course gears and tires will only get you so far. The drag development Camaro also packed some extra power. While the stock Camaro SS produces a healthy 455hp, the Chevrolet Performance head and cam package for the LT1, combined with their cold-air intake and performance exhaust, results in more than 530hp. The team didn't stop there. Chevrolet is being shy about the details, but additional powertrain mods pushed the LT1 to about 600 hp, which helped it run a best -mile ET of 10.685 seconds at 125.73 mph. Testing continued into 2017 and is still ongoing, as products will roll out shortly to help the gen six Camaro SS hold its own on the dragstrip. Here's how Chevrolet Performance picked their parts and will be validating them this year to release as actual drag race parts you can buy right out of the Chevrolet Performance catalog.

The new torque converter's stall speed is 4,200rpm, about 30 percent higher than a stock Camaro SS . The ability to launch harder, combined with additional grip, resulted in a best 60-foot time of 1.425 seconds.

Smaller 16-inch diameter wheels were used to fit slicks with some sidewall flex. That mandated smaller diameter brakes as well, which are unique to the drag Camaro.

The factory 2.77 gear set used in the automatic transmission sixth-gen Camaro turned out to be the best suited for the hard launches with the high-stall converter and sticky tires.

The Camaro SS Drag Race Development team recorded more than 300 channels of data, about 100 were powertrain-related, 40 were vehicle-related, and another 30 or so were chassis-related.

The team at Chevrolet Performance set out to make major improvements on the 2016 COPO Camaro.