Check Out the Coolest Doorslammer Drag Cars From Canada 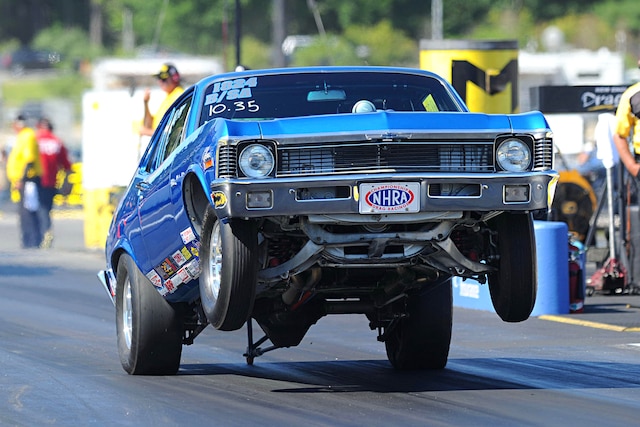 A Nova Scotia Nova
Simply put, Ervin Motorsports (Nova Scotia, Canada) campaigns one of the nicest Chevy Novas out there. The father and son team of Bill and Trevor Ervin built this 1970-model B/SA classed car. Their project started out in 2007 as only a shell and over a two-year period was built up until the spring of 2009 when it debuted in Stock Eliminator. The Nova features a 402ci, 375hp big-block currently rated by NHRA at 405 hp. The engine was built by world-renowned engine builders John and Allyn Armstrong (also from Nova Scotia). The Nova currently holds both ends of the NHRA national record for B/SA at 10.05 and 130.22 mph. Trevor races primarily within what is recognized as one of NHRA’s toughest Stock Eliminator divisions (Northeast Division 1) and also within far eastern Canada’s Atlantic Canadian Stock/Super Stock Association circuit. Primary backing comes from Terry Kelson (Kelson & Kelson Ltd.) and receives undeniable influence from fellow Maritimes-based Chevrolet brand racers Fred Thibeault and John Armstrong. The ’70 Nova is one of a fleet of Chevy cars owned by Ervin Motorsports, along with a Super Stock GT/EA 1986 Camaro and a soon-to-be debuted Stock Eliminator 1969 Camaro that should see action next summer.

Mike’s Malibu
Mike Semeniuk is a successful Super Stock class runner within the Edmonton, Alberta area. He has dedicated his racing to a superb and time-proven 1981 Malibu, which runs as a GT/MA. He has campaigned the Malibu since acquiring it from Bob Dechaise in 1995. Originally conceived and constructed by Jim and Pam Gorman, it was reportedly the very first Super Stock GT car built from this area. Mike has run a few configurations with his Malibu over the years but has settled into a 250hp 1968 327 (NHRA factored to 261 hp) engine. Somewhat of a rarity, that engine was a one-year-only low-compression (8.5:1) small-valve production. It is also outfitted with a stock, cast GM small-journal crank and uses Layer heads updated by fellow Canadian Super Stock racer Ernie Penner. Mike’s Malibu, which tips the scales at 3,350 pounds, is well known for its crowd-pleasing, wheels-up launches. Most of Mike’s racing occurs at higher altitude racetracks, but the Malibu’s best mph of 123.84 and its best e.t. of 10.59 both occurred at sea level. Mike’s eldest daughter (Lisa Rosebrugh) and Bryan Gabel have both served roles as crew chiefs at Semeniuk Racing. His current primary sponsor is PlanetCom Digital IT Solutions; associate sponsor Vegreville Autobody originally painted the car and keeps it shiny.

Ontario Orange
Longtime GM brand racer and Stock Eliminator specialist Doug Box (London, Ontario) continues his prominent trek forward within Eastern Canadian drag racing. Doug’s signature car (one of three machines his DBSE Racing team owns) is an extremely well prepped and maintained 1969 Camaro. This car utilizes a 396ci, 375hp engine featuring aluminum Chevrolet Performance heads and intake. After purchasing the car a decade ago, Box has been massaging it ever since to run in either A/SA or AA/SA trim. This Camaro features a lot of Canadian content, too, including a Hutchinson Transmission Turbo 350 (London, Ontario) and a signature Hugger Orange paintjob by Jeff Gable (Stratford, Ontario). So far, Doug, the owner and operator of Maple City Tire, has coaxed a best time of 10.18 at 129.95 mph from his ongoing project while racing primarily within the Eastern Canadian Can-Am Stock/SS Association and attending some NHRA divisional and Great Lakes Stock/SS Series events. Doug’s other two race cars (also both painted Hugger Orange) are Chevy stockers, too, and both 1969 Chevelles (a K/SA wagon driven by daughter Maddy and a C/S raced by son Willie).

Canadian COPO Crusader
For Canadian drag racers, acquiring a new COPO Camaro has been a difficult score indeed because of some direct-from-Chevrolet factory program restrictions that exist within the USA. But Al Procter (St. George, Ontario) overcame that during the spring of 2017 when he landed himself a 2017 Camaro after striking an association with program director Rich Rinke in Michigan. Procter, who formally had experience racing in the Super Gas 9.90 index class, optioned for the 350ci supercharged engine for his Camaro and with that began to set his sights on the high-echelon FSS/AA class. Throughout most of the 2018 racing season, Procter was in test mode as he, along with help from Canadian drag racing car builder FJ (Fred) Smith, worked at massaging the race cars’ combination. Toward the tail end of the season the new race car began to show great promise ... including some elapsed times in the 8.7-second zone. “It’s an 1,100hp car with 18 psi of boost and 11:1 compression,” Procter revealed. “With small tires, it takes some time to get it going right.” Procter also indicated his desire to eventually graduate his COPO to include some FS/XX class racing. If successful, that could make him the first-ever Canadian driver to enter NHRA’s Factory Stock Showdown series.

Church Boys Racing teams up with TMI interiors to build a modern Nova that can handle, perform, and cruise in style.

Chris Holstrom reflects on how he got started in the muscle car world and the fact that street racing sent him to the poor house.

» Read More
This track-only 1966 Nova was revamped into a street monster!

Most people build their street cars into race cars. Rick Plush took the opposite route with his blown, big-block ’66 Nova, and the result is stunning.

This 1972 Chevy Nova restomod dials back on the super-high-end show-and-go parts for a more sedate muscle car driving experience.

A father and son team turned this worn-out 1967 Nova into a big-block–powered street brawler.