Building A Pro Touring Second-Gen Helped Teddy Niotis Get Through The Toughest Time Of His Life. 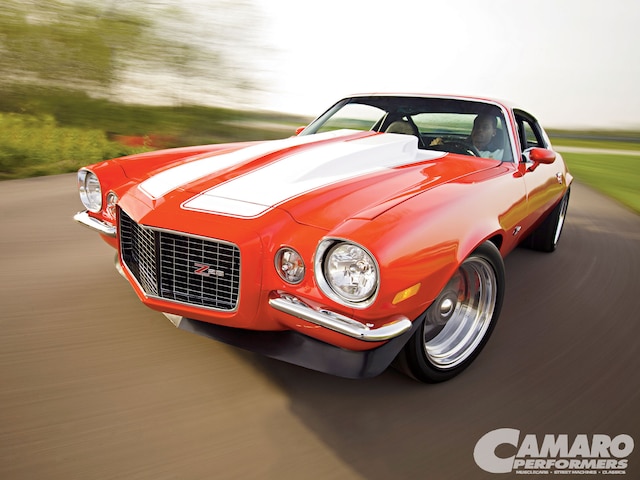 Sometimes a misfortunate event in one's life can promote a circumstance of opportunity. Such was the case when business owner and Camaro enthusiast Teddy Niotis lost his right foot and ankle to a diabetes-related staph infection. Teddy needed something to keep him motivated, something to keep his mind off a negative life experience. Building another Camaro was the perfect medicine to keep his life heading in a healing direction.

As is the case with so many project car starting points, Teddy used eBay to dig out the perfect candidate for his therapy. He found a 1970 Chevy Camaro located in Orange County, California, for a mere $815 bones. "I paid $1,000 to have the car transported here to Grand Haven, Michigan," Teddy says. "The car had no interior, frontend, or drivetrain-it was exactly what I was looking for."

Not long after the car arrived, Teddy got the shell of a Camaro in the garage and began the disassembly process. After six months on a rotisserie, the car was finally sandblasted and sent to the body shop. From that point on, the fun really started: parts ordering.

"A good friend of mine, Mike, told me this project was a bad investment and that I should just sell the thing, but I wouldn't listen," Teddy says. "Nothing was going to change my mind; I was 100 percent focused on building an awesome Pro Touring Camaro with the latest aftermarket parts."

With the car back from the body shop, Teddy finally got his prosthetic leg and began working full bore on the car. "Come to find out, there were a lot of things I couldn't do like I could before. My friends really stepped up and helped out. I can't thank Jason Pittman, Dave Vaneck, and Steve Wierengo enough for all they did for me-physically and mentally," Teddy says.

Teddy and his gang worked meticulously on the car. From smoothing the firewall to lining up all the hood and door gaps, not much if anything was overlooked. The subframe was re-welded, and they welded in a set of custom-made subframe connectors. Just to shake things up a bit, a dash and center console from an '02 Trans Am found itself as part of the interior.

"I wanted the engine compartment to be one of a kind, so I dressed up the engine bay with pretty much every chrome and billet part I could find," Teddy says. "There's not much in there that doesn't demand your attention."

That's the whole point, isn't it Teddy? Baker Engineering assembled the balanced and blueprinted 383 Stroker; it's bored 0.030 over and stroked 3.75 inches. E-Tec Edelbrock cylinder heads smother the 9.5:1 SRP pistons, while a BEI cam comes in with an intake lift of 0.544 and duration of 236, while the exhaust side features a 0.531 lift and duration of 242. You're probably thinking Teddy went a little cautious on the compression ratio, but the MagnaCharger M112 puts to rest any preconceived notions that he's building a poser.

Rated at 540 hp, an A1000 Aeromotive fuel pump provides the greedy small-block plenty of swill to quench its octane thirst. A Melling oil pump keeps the crude circulating through the Milodon 7-quart pan. A Be Cool polished-aluminum radiator keeps engine temps in check and Billet Specialties' Tru Trac pulley system provides the function and form compliant with the remainder of the shiny parts.

Zippy Performance beefed up the GM 4L60E transmission and mated it to a 3200 stall converter. Twist manifests its way down the D&R custom-built driveshaft managed by a 12-bolt posi unit armed with 3.73 gears.

When building a Pro Touring ride, quality suspension components are a major part of the handling equation. Having no factory alliance, Teddy went with a combination of notables in the aftermarket suspension world. Speed Tech (upper control arms) and Global West (lower control arms) offer a 2-inch dip in ride height and provide the necessary strength and performance up front, and Hotchkis 2-inch lowering springs take care of business in the rear. QA1 adjustable shocks smooth the ride while GM C5 Corvette brakes take over stopping duties on all four corners.

Automotive Interiors took responsibility of the custom door panels, covered the Corbeau VX2000 seats, laid down the ACC black carpet, and installed the aforementioned Trans Am dash and center console. A compilation of Auto Meter and Dakota Digital gauges teamed up to keep Teddy in the know, and a Flaming River steering wheel offers compliance in varied corners and convincing turns. A Vintage Air A/C system keeps Teddy in a climate-controlled zone, as he'll be spending countless hours on the road. A Pioneer head unit takes charge of the tunes through a 1,300-watt sound system, featuring four Memphis 6-inch speakers and duo of Crossfire BMF 12-inch subs built by Tech Audio.

With over three years of hard work and dedication, it was required that Teddy's Pro Touring dream make a point, so Rademakers Auto Repair in Grand Haven slathered the ride in a vibrant Scarlet Red, and Rodger Bulson took charge of the SS stripes. Although it's not something you've ever seen before, it reeks of speed and style-a Pro Touring requirement.

"I have so many great memories of the three years it took to build this car. I've learned a lot, had way too much fun, met tons of great people who I now can call 'friends,' and have taken a negative deal and turned it into a positive experience. I can't thank everyone enough who helped out with this project. I'll remember this build for the rest of my life."

Teddy's unfortunate incident was the motivation factor in his building one of the most beautiful Pro Touring second-gens on the streets of Michigan.