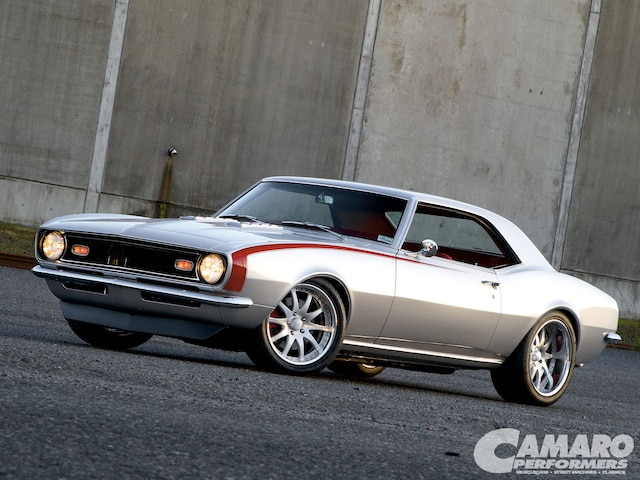 You can't really fault Generation X for its short attention span. We were guinea pigs for sophisticated target marketing, we were the first generation to get computers in the classroom, and we came of age on four-minute vignettes set to highly synthesized '80s music. From now on think of the Internet's capacity to reward users to flit about as their ever-narrowing attention span sees fit as our little gift.

That said, perhaps it's no surprise that the Internet distracted Chris Holstrom from a work-in-progress. "I was in the middle of a '41 Ford coupe project in 2005 when Jason Rushforth introduced me to Lateral-G.net," he began.

Now to know Jason is to undergo perennial transformations of sorts, even if you don't want to. The guy is hardcore into G-machine-style cars and he's downright persuasive; He's an artist, so when he's done explaining what he sees with his mind's eye he breaks out a color rendering of it. And since the two have been buds since high school, you could say that Chris has been Jason's guinea pig. "Long story short, the '41 went on eBay," Chris continued.

Apparently not everything has changed over the years: good First-gen cars are either priceless or worthless. "There was so much rusted-out junk for sale," he said. "I was disheartened until I saw an ad on Team Camaro.net." The victim of a botched quarter-panel replacement, the car was a mere 100 miles away. "$4000 and the body was mine," Chris reveled. "No motor or trans, and it was all ripped apart, but I finally had a First-generation Camaro!"

Naturally, he spent a good deal of time and effort fixing what the elements and prior owners' inflicted upon the car. Then he turned his attention to styling. Jason obliged with a few ideas.

By shaving the government-mandated side markers, swapping for earlier RS taillights, and using a Goodmark hood, they conspired to make the car look a bit more like a love child of a 1967 and 1968 Chevy Camaro SS. While he was at it, he welded up the panel edges to tighten up the gaps, and massaged the body straight. Typical for Jason, the colors came right out of the new-car songbook: Audi Reflex Silver and Salsa Red, both from PPG's urethane base/clear systems.

But the car is more than just a pretty face. Chris built an LS-style engine based on an '03 LQ4 truck block and rotating assembly. Bud's Machine Shop in Lakewood machined and reassembled it with a hotter COMP Cams camshaft. Titanium retainers and custom springs withstanding, the heads are stock; however, he did replace the manifold with an LS6 piece. "I have no idea how much horsepower ..." Chris admitted, "... but I built it around a Car Craft article that produced 480 hp at 6200 rpm." For reference, that appeared in the April 2007 issue. And for the record, the car moves.

The transmission started life as a T-56 six-speed from an '02 Camaro; however, Chris gave it the once-over with billet shift keys and updated the synchros and shift forks. He adorned it with a Z06 clutch and a Hurst shifter, and bolted it in with an ATS crossmember and install kit. Strange Engineering made the driveshaft.

A narrowed Ford 9-inch and a 4 1/4-inch backspace on a set of 19x10 Rushforth Rated X wheels let Chris stuff 295/35/19 hides in the rear houses. Given all the power and traction potential, Chris elected to run Yukon 31-spline axles. To make it fun, he chose a 3:89:1 gear set and a Tru-Trac limited-slip gear carrier. To keep it relatively simple, Chris hung the assembly on a Detroit Speed and Engineering parallel-leaf kit.

Like the exterior, the cockpit is a balanced blend of vintage aesthetic and modern performance. Take the seats, for example: they're Fourth-gen models that Chris cut down 9 inches. He replaced the limited gauge selection with Autometer Pro Comp Ultra-Light pieces. Chris kept the stock column and invested the money in a Billet Specialties Indy tiller.

He replaced the meager ventilation system with a Vintage Air Mark IV heat/AC climate-control system. Once he roped the car with an American Auto Wire system, he turned the car over to Tim Norman at Classical Glass Upholstery in Black Diamond for a red-vinyl trim.

Chris and his pals, Art Strohrmann and Rob Sonnomen, reassembled the car before delivering it to J-Rod & Custom for finishing touches. Painter, Gertrudis Rodas, laid down the silver base and clear earlier on, but only after reassembly did the car get the inverted hockey stripe. "I have to thank my wife, Alyssa, for putting up things like that," Chris said, acknowledging the fact that a cloud of clear coat wafting through the house at three in the morning isn't the best thing to wake up to.

Jared Hancock and his crew thrashed on the car, reassembling and color sanding it until Halloween, the day before Chris embarked on another crazy journey, this time to the '08 SEMA show. "The front sheet metal wasn't installed," Chris recalled." Nor was most of the trim. We had several guys working all night long to get it done."

Just about the time he got the '68 finished up, another red herring crossed his path. Only this one came with the promise of lots of money. Not that it's a problem, mind you; Chris said he's making a crack at building cars as a business. "I built this car in my two-car garage to showcase my abilities," he said.

This particular red herring came with more than just money, too; the new owner, Nebraska collector Bryan Frank, sweetened the deal with what Chris calls, "a beautiful '71 RS." Since then, he's turned that car and is building another '68, this time with a Trans-am-style road-racing theme.

Considering he turned junk into a jewel in one year, the future for an already-nice car looks very promising. Maybe this short attention span thing pays off after all.