James Shipka Keeps It Real With His Badass '67 Camaro 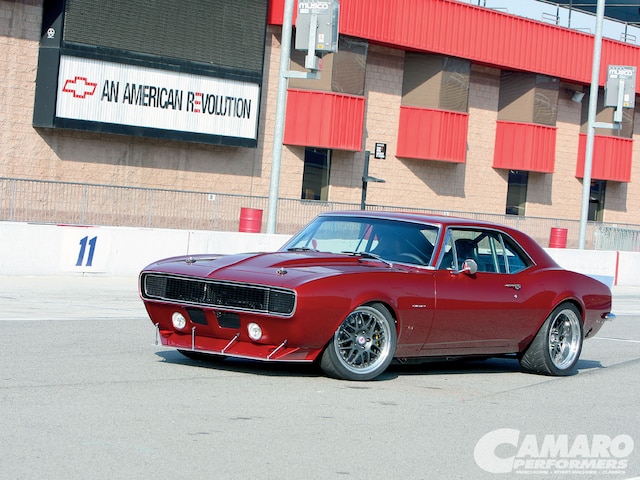 We were online recently and saw someone asking if Pro Touring had jumped the proverbial shark. It appears that the poster had noticed an uptick of cars proclaimed as pinnacles of Pro Touring. The rides he mentioned ran the gamut from all-out "show touring" cars that just looked the part, to basic Camaros with some cut springs and 17-inch wheels. What he thought was missing were cars that didn't just look the part, but ones that also held to the Pro Touring performance mantra. He was looking for Camaros that aren't afraid of melted rubber, cone rash, rock chips, and the other badges of honor that have to be earned. What he was craving was James Shipka's '67 Camaro.

You see, James' ride is almost a poster child for the whole Pro Touring build style. It's has the looks to "wow" them at any car show and, all the right performance parts to "throw down" on the track. Even more importantly, James isn't afraid to thrash his Camaro around any venue, open highway, or parking lot strewn with tantalizing orange cones.

But, like all projects, this one started out as just a plan. As James told us, "My wife Debbie and I have been building, racing, and generally enjoying first-gen Camaros since we graduated high school. In fact, we've had at least one in the family for the last twenty years. In 2005, we decided to pick up a new project. I know its way cheaper to buy a done car rather than build one, but I build cars. I want to know every nut and bolt involved. I need to know its secrets and have it my way, so buying a finished one was out of the question." After searching around their hometown of Calgary, Alberta Canada, and south of the border in the U.S., they finally hit pay dirt. "I found a really cheap eBay special in the fall 2005. The car was on the other side of the country and was an old Pro Street car that didn't look entirely horrible. From the pictures and description, it sounded like a decent winter project. So I bought it and began formulating a plan," recalled James.

James knew what he wanted, and he felt that the newly-acquired Camaro would make for an easy build. Unfortunately, his plan died a painful death once the car arrived. "When I finally got the car home, it was worse than I had imagined. If I had paid more, I would have called it a scam. The body was really rough, the subframe was cut up, the third member was empty, the rear brakes were missing, and the engine was in pieces. Anticipation quickly turned to disappointment, but then again, I only paid 2,500 bucks," deadpanned James.

After bead blasting the body, the news kept getting worse, so James called an old friend of his, Chris Heighton, owner of Heighton Restorations in Beiserker, Alberta. The pair went over the car and started compiling a huge list of what needed fixing or replacing. Some would have given up, but James is stubborn and decided to push forward.

Bodywork started in early 2006, and by the end of the year, they had it repaired enough to return to James' garage. The only pieces to survive from the original car were the rocker panels, roof, and tail light panel. Everything else was replaced. In hindsight, James thinks that first year was pretty easy.

With the car in reasonable shape, it was time to start on the modifications, both appearance and performance. As James mentioned, "from the beginning I was set on building a Pro Touring car, but first and foremost I wanted to build a car that could be driven on the highway and on the track. I looked at events like the Silver State Classic and the One Lap of America, and knew that I wanted to build a first-gen that could represent well in competitions like those. To me, the One Lap of America represents the ultimate test of performance, reliability, and drivability, so I decided to build the car to be competitive in North America's most challenging cross-country rally. To succeed, the car would need to balance power and performance with dependability. It would also need to have equal parts track and highway manners. After all, you're talking about a week-long race that incorporates 3,500 highway miles with road course, autocross, drag race, skid pad, and circle track elements."

As the build progressed, it began to take on a life of its own, and James fell into the "we've come this far, so we might as well ..." trap that we've all been sucked into. At one point James was so frustrated trying to fit front sheet metal that he gave up and pulled the NOS sheet metal off his wife's '67 project. The car fought him every step of the way, and eventually earned the nickname "tweak" since nothing seemed to fit, and just about every part had to be modified. One area where a lot of tweaking occurred was the inner fenders.

James explained, "We spent a lot of time on the inner fenders trying to incorporate the dry sump tank for the 427 LS engine. I think they have more sheetmetal modifications done to them than many complete cars I've built. The dry sump tank has been shielded from the front tire, the splash guards have been eliminated, and the entire area reshaped. Both the front and rear mounts have been relocated, and the entire inner corners were fabricated by hand. Likewise, the radiator support was extensively modified beyond the typical clean up.

The hood release was turned 90 degrees and converted to cable release. We made the decision to eliminate all of the requisite fender shims and, where needed, machined spacers to ensure near perfect fit and finish. For the lower valance I wanted to incorporate '69-style turn signals and wound up using two '67 valances and one off of a '69 to create something different, only with an OEM look. The front spoiler was based on a factory plastic piece, and retains the dimensions of the original.

We hand-fabricated it in the shop and, we feel it ties in well with the sheet metal rear spoiler." The subtle modifications continued, from the tow hook slyly poking out of the rear back up light, to the way the exhaust exits through the rear quarter panels. James didn't want his Camaro to loose its essence-he just wanted to put his own take on it.

The first major suspension modification was the addition of a Lateral Dynamics three-link rear suspension. The installation was pretty straight forward, but since James wanted a factory appearance, he did a lot of work integrating it into the Camaro's factory floor. To get the enclosure for the upper link just right, he ended up reworking a trans tunnel from a late '60s T-Bird.

The trunk was also modified to give additional exhaust clearance. Up front, a replacement factory subframe was welded up by American Touring Specialties and fitted with their Chicane-LM coilover conversion kit. The engine needed to be powerful yet reliable, so James contracted Katech Performance to build a dry sump LS7 mill that spits out 603 hp at 6,200 rpm and 564 pounds of twist at 4,795 rpm on the engine dyno.

Behind the 427 resides a Tremec T56 Magnum from Classic Motorsports Group, and hanging in the balance is a 9-inch rearend assembled by Currie Enterprises. Everything was picked with an eye on dependability. It'll be needed for the brutal events James has in mind. Even something as innocuous as the electrical system was given the top-shelf treatment-an ISIS Intelligent Multiplex system.

But, just because the car was built to race, doesn't mean it can't kick serious ass at any car show. The custom Sunset Red paint laid down by Chris is stunning, and the Marquez Design interior manages to update the classic ride without going overboard. There are billet trinkets from companies like Marquez Design, the Ringbrothers, and RFR Custom Fabrication-but not too much. It's a ride full of subtle details that conspire together to create an overall package that's both classic and modern at the same time.

In total, James' Camaro took nearly three years to build and was finished just in time for the 2008 SEMA show. Since its debut, the Camaro has spent the last year attending various events such as the Nevada open road races, Optima Invitational, open track days, and many autocross runs, all in an effort to get the car sorted out for next year's One Lap showdown.

Instrumental in getting the Camaro in shape has been David Pozzi of Pozzi Racing. He designed custom front and rear Hellwig adjustable sway bars, modified the front steering arms and centerlink to afford more wheel clearance, and along with James, has performed a plethora of suspension tweaks and changes. But wrenching and getting a car "just right" is half the fun of hot rodding. Thanks to guys like James, that shark may never need to be jumped, and Pro Touring will stay true to its roots.