After 10 Years Of False Starts, Larry Callahan Gets His Pro Touring '68 Built In Just 42 Days. 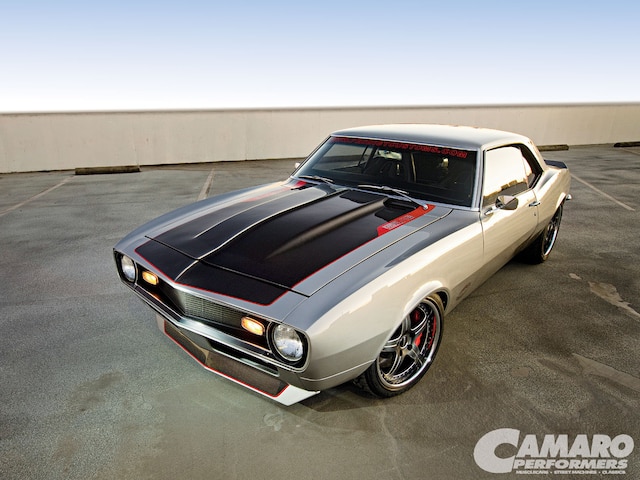 It's true that you really don't know what direction life is going to take you. You start off on plan "A" and before you know it, you're on plan "E" and clueless on how you got so far off track. This phenomenon is especially common when it comes to gearheads and their project cars. Take Larry Callahan for example. When he bought his '68 Camaro 20 years ago he didn't have a clue as to the automotive adventure that awaited him. Larry recalled, "Around 1988 when I was living in the San Fernando Valley, I went looking for a muscle car.

As luck would have it, I spotted a '68 Camaro with a $3,850 price tag on the windshield at a consignment lot. It was red with a deluxe houndstooth interior, air conditioning, a 327, and a powerglide. The interior was in decent shape and it ran fairly well, but it was a gutless wonder with a two-barrel carb. The previous owner said he was selling it because he bought it for his daughter who didn't want it. She said it was a boat and wanted something cute and small."

Larry continued, "The '68 then became my daily driver for about the next 10 years until the powerglide died. I swapped in a TH350 and a mild 383 from a local speed shop and that's where it all went south. Shortly after it was running again, I started messing with it. I tweaked the valve body and governor to make it shift harder and later. Hard enough that while approaching redline in Second gear the tranny shifted hard into Third and snapped the input shaft. The engine must have hit 10,000 rpm before I was able to lift my foot; the converter ballooned and put enough pressure on the crank to spin the main bearing.

After the engine was fixed I put about 500 more miles on the Camaro, then I tore it apart to put on disc brakes and work on making it more like a new sports car. The front suspension was so worn out I was afraid to drive it on the freeway next to the center divider. I knew what I wanted to do with the car, but at the time there were no readily available parts like there are today. Back then the term Pro Touring had not been coined, but that's what I wanted to do; build an old-looking car that could spank anything you could buy new at a dealership. So I tore it apart, started collecting parts, and began working on it. Over time it was set aside when money ran dry, or I didn't have a place to work on it."

Of course, it didn't help that Larry kept changing direction with the build. After all, when you build a car slowly, styles and tastes tend to evolve. What's cool this year looks outdated down the road. Larry ended up going through three sets of Auto Meter gauges simply because they kept coming out with styles he liked better each year. During this time Larry created a website where he could post pictures of his project. One thing led to another, and on March 9, 2000 he registered and started pro-touring.com. Larry told us, "For years I ran the site and tinkered with my car, but could never find the time, or energy, to get it back on the road.

I lived vicariously through the members of the site, attended and helped organize events, all to promote the build style I enjoyed so much. All the while I was constantly being asked where my car was." Larry was stuck in a place we've all been at one time or another. The responsibilities of life just didn't leave him with enough time, or motivation, to get his pile of a project anywhere near the vision he had locked in his gray matter.

Larry languished in this self-imposed purgatory until the middle of 2008 when fate stepped in and shifted his project into high gear. His plan had always been to build the car himself, but the realization finally set in that at the rate he was going, the first tank of gas would be bought with his retirement money. His website's community was growing. One of the members of this online family is Frank Sarafine of Prodigy Customs. Larry started talking with Frank about building the Camaro and Frank suggested that they build it for the '08 SEMA show just a few months away. The pair quickly came up with a game plan, and the '68 was shipped 2,200 miles east for the transformation.

By the time the car arrived at Prodigy Customs, they were down to just over 40 days until the Camaro would have to be back on a truck heading west to the SEMA show. Not a lot of time, especially considering the scope of their project. The body was stripped, straightened, and massaged for paint while the chassis was assembled in the next bay. It was madness and mayhem congealed into just over a month of building. To say the build was epic would be an understatement; there's a thread on Larry's website with over 160,000 views and 1,600 comments.

The team at Prodigy did video postings of the build on YouTube a few times a day (type motiv8r into the search bar) and scores of people followed along with the build. As Larry remembers, "About a week before my car was complete, I flew in to help wrench on it. It wasn't long before I figured out I was way out of my league. Everyone at Prodigy Customs and Norris Motorsports, who did the turbo plumbing and headers, worked around the clock. At times it was embarrassing how slow I was. These guys are like car building machines who don't need sleep.

Almost every day working on the car ended just before the sun came up. I can remember putting in a 20-hour day, crashing for a few hours then coming back and finding John Parson and Mike Norris were still there! That was an experience I will never forget, and something I will probably never do again. Spending a week working on the car around the clock, flying home while the car was being transported, getting ready for SEMA and our annual banquet, and then attending SEMA was the craziest couple of weeks of my life. I don't know that I could do it again."

As for the Camaro, well it came out just as Larry had envisioned. He had seen a silver Corvette that Sarafine recently finished and knew that was the color he wanted. After working with artist Ben Hermance, the team had a rendering for how the paint and graphics would be laid down. One unique aspect is the conspicuous use of carbon-fiber panels from Anvil Auto. "I found out the carbon fiber is a 'finger magnet.' Everyone has to touch it and they all assume it's fake. It doesn't even cross their mind for a split second that it might be real carbon fiber," mused Larry.

The silver paint and exposed carbon-fiber stripes are highlighted in red, and the car's MotiV8r moniker is emblazoned on the hood. In regards to the name, Larry explained, "My wife, Susan, came up with it and I chose it because it truly was the big motivation in starting and running my website with a great group of moderators." It's also fitting since Larry's website has helped motivate so many others to get their cars done, and more importantly, drive them.

In the end, Larry's Camaro made its SEMA debut, and since then he's been working steadily to get the boosted bruiser all sorted out. We asked him what stands out in his mind about the build. "The most memorable experience has to be when my wife, Susan, saw it for the first time at SEMA last year. When it left for Prodigy Customs it was a mess, with the interior piled full of parts and junk. A big moment for me was when she saw it sitting in the Centerforce Clutches booth. We had been together for about 10 years and she had never even seen it run.

She loved how it came out! All the nights working on and talking about it, being around all the cars from the website, drooling over the cars at SEMA for years and I finally did it. Well, I and a great group of friends did it. The other big moment was driving it to the convention center from the hotel and into the building at SEMA. I have been attending the convention since 2001 and never thought my Camaro would turn out well enough to be invited. It was a proud moment driving it into the building while other cars were pushed in."

Larry has a busy future planned for his Pro Touring showcase. Knowing him, it will be driven, raced, cruised, and slightly abused. With any luck he'll continue to motivate others to do the same.