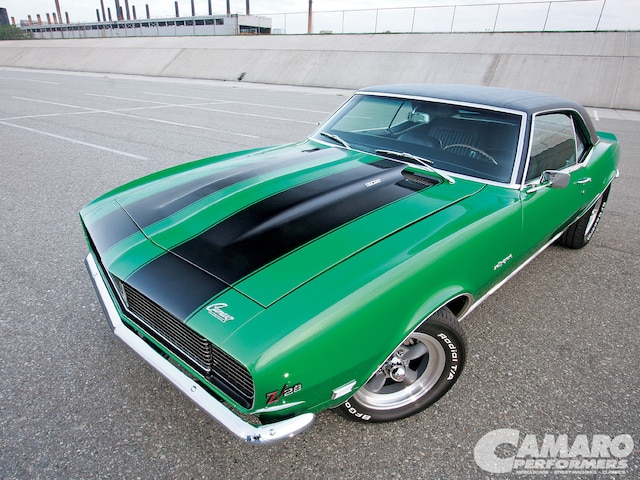 Thor Mollmann does it his way and winds up with one of the neatest projects yet, unsullied and unaffected by the boredom that inevitably follows the usual modern convention.

Thor's original '68 Z28/RS doesn't languish in some unapproachable salon icon-like, only to be admired but never driven, as if its appearance in the light of day or contact with the grit of tarmac would suddenly diminish it; might cause it to vanish in a rare vapor. There's always the off-chance it could be taken out by some hump in a $3 beater. It's much too valuable, too precious for that, right? Thor smirked, harrumphed, and then strove to bring some heat to the traditional contract.

To prove the point, car builder Cris Gonzalez (JCG Restorations & Customs, Oxnard, California) drove the Camaro from Thor's home in Ventura, California, to south Orange County and laid the keys on Editor Nick with the stipulation that he should try to hurt it, do his worst. Fine attitude, that.

Californian Thor found this genuine article a well-known island chain in the middle of the Pacific. It had been a race car of some sort all of its days and the engine it came with wasn't even close to the bright-day 302 of record. It flustered Thor not in the least. He wanted a high-rpm but torquey and powerful small-block based on the original internal dimensions. No mega-stroker, nitrous folly, or supercharged air. In fact, he made no popular concessions at all, just atmospheric in, atmospheric out.

"It's a high-winding motor. It's not meant to be chugging at the bottom of the rpm band," said Gonzalez. "Thor's goal was to build the Z/28 like he knew them in his high school days. He isn't old enough [39] to have experienced this when the cars were new, but there were still a lot of them being used every day. He's of German heritage so he firmly believes in heirlooms. He has three young sons and a daughter, and the first one will get this car. Eventually, he wants to do a car for each one of his kids."

Thor's toil produces the wherewithal but leaves little time for family outings or turning wrenches. The hard-core of Thor's legacy is his work as a firefighter who maintains as many overtime hours as possible. In light of the recent epic 260-square-mile burn near his neighborhood, he's been getting plenty of that. He's also a military reservist who spends weeks at camp every year, so family quality time becomes his priority at every opportunity.

"The car was owned by Larry McGee [race driver] who then sold to a guy named Rodney Camaro in Hawaii," related Thor. "I bought it in 2002. It had a built 396 and it was pretty fast. We rebuilt the car for my sons, now 4 and 6. My 1-year-old baby boy is also now part owner. I did this so they could learn to appreciate American muscle car history. And they are big fans of Disney cars and Lightning McQueen. They love to ride in it. Even my daughter loves to ride in it."

Thor wanted cornered-rat ferocity from the miniscule mouse, but he also wanted it to be completely streetable, to start, idle, and honk around town like one in a modern vehicle, even though it wouldn't be doing this on a daily basis. Since he's unlikely to be present at any given time, Thor named Cris Gonzalez his emissary and the Z/28 his ward. Consequently, Gonzalez has been having lots of fun beating up on Thor's heirloom.

As the Z/28 was nurtured and developed ostensibly for the rampant factory involvement in Trans Am racing, it was bound by a 305ci engine displacement when the Big Four automakers were beginning a heavy upswing to engines that were internally and physically larger than ever before. The 301's 4-inch bore x 3.00-inch stroke netted an actual 301.59 ci. Chevrolet marketers simply stretched the truth a few millimeters to match the occasion. Thor's motor has a 0.030-inch clean-up bore, expanding its insides to a schoche more than 306 ci. The 302 also had kinship with drag racers of the day. Most of the lower-class gasser and modified production cars stuck with this displacement like gospel and their drivers stabbed the clutch at a heady 9,000 rpm.

Thor has done precious little else to the Z/28 and that is where the crux of this report lays. The engine got most of the attention to make driveable torque as well as high-rpm horsepower. It produces 466 hp at 6,800 and 400 lb-ft at 5,300 rpm at the crank - about the same verve as the race-ready Trans Am 302 back in the day. John Villegas sent the rotating parts and cylinder block to Jim Grubbs Motorsports in Santa Clarita for the machine work while McKenzie's Racing Cylinder Heads CNC-ported the camel-hump castings (2.02/1.60 valves) in nearby Oxnard.

The idea was to make the 306 as stock appearing as possible, but to roil its guts like a Modified motor straight out of the '60s. Villegas laid the groundwork with ARP studs. On the forged steel arm he set reconditioned forged steel connecting rod pinned to 12.5:1 JE pistons. He filled the cam tunnel with a custom-ground Comp solid roller (0.630-inch lift on both valves, 256/258 degrees duration at 0.050, 106-degree LSA) and joined it up with Comp pushrods and valvesprings. The rocker arms are pressed steel, as original. A 6-quart GM oil pan houses a Melling pump and Cloyes timing gear whirs behind the front cover. Every other engine accessory is original or facsimile of the same, even the fuel pump.

Villegas included an MSD 6AL box and ceramic-coated Doug's Headers with 1 7/8-inch primaries that lead to an X-pipe, Flowmaster 40 Series mufflers, and an aluminized 21/2-inch Flowmaster exhaust system. The crown, of course, is that cross-ram intake manifold (PN 3940077) and those staggered 4295 Holley 600-cfm carburetors. Stan Younts at Stan's Restoration in Lexington, North Carolina, supplied the manifold and the cowl cool-air feed assembly, as well as some other bits of Z/28 engine unobtainium. The rest came from Rick's First-Generation.

There were several iterations and revisions of this exotic induction system depending on the year of use and user (Penske, Yunick, TRACO, etc.). It was only offered as a dealer-installed option (first available in 3/68) and never included on any assembly line vehicles. Right off, it was worth 25 hp over the single-carburetor setup. These manifolds came out of Winters Foundry, the outfit that put its trademark "snowflake" on almost all Chevrolet's aluminum castings regardless of application. Cost of a plenum air intake and duct system (furnished loose, as in the trunk inside a burlap bag) was $479.25. Tubular exhaust headers, also furnished loose, were $779.40.

Thor would have no less than an M22 'speed beneath the boards. It's attached to a GM 403 bellhousing over a Centerforce 10.5-inch-diameter clutch assembly and steel flywheel. Ron Gates Transmission upstate in Sunnyvale, California, rehabbed the four-speed, making sure all the gear whine was just right. Coast Driveline in Ventura refurbished the original prop shaft with new Spicer U-joints, then went through the 12-bolt, fitting an Eaton positive traction differential with 4.56:1 gears! Yeah four-and-halfs with a 1:1 final drive, just like we did it in the bad old days.

Thor upped the audacity level, leaving the suspension entirely as it came from its Van Nuys, California, womb, adding only Koni adjustable shock absorbers and fixing the rear axle with CalTracs bars. The front subframe was insulated with JCG bushings. As it came from the assembly line, the Z/28 was equipped with power-assisted 11-inch discs at front and drum brakes on the trailing end. No hinky JL8 four-wheel discs, no 14-inch aftermarket dinner plates, either. Sure as hell wouldn't be copacetic. The Z was equipped with 15-inch wheels and that's what Thor maintained: American Torq-Thrust Ds measure 15x6 and 15x7 are joined with BFG Radial T/A 225 and 255/60 aspect rubber.

Air conditioning was not available on any Z/28, so naturally Thor did not retrofit it to this car. Though a quick-ratio steering box was mandatory, it was not accompanied by a power assist. The interior looks completely original, downright time capsule stuff, because that's what it is. Anyone with an ounce of sense would have thrown the stock Inland shifter as far as he could and stuck Hurst linkage in the hole. Even the original Delco AM still squawks. Jesse's Upholstery in Ventura did the tango original with GM repro coverings in standard vinyl. The steering wheel is another GM item.

In the day, you could have ordered a 35-pound fiberglass hood to clear the cross-ram air cleaner but they (as an SCCA race item) were expensive to produce and were supplanted by a 50-pound ZL2 steel rendition. Of course, Mollmann's Z wears a repro 'glass unit. JCG Restoration did the body prep and the (RPO JJ) Rallye Green paint, a two-stage PPG application. Cris Gonzalez: "It's got real beautiful contrast to it with the black stripes, the RS grille, and the blacked-out roof. The Rallye Green is a pretty fluorescent field for the black and how Thor wanted me to do it, to take it back to stock."

Over four years, the build consumed something like $100,000 and countless hours that Thor didn't have to relinquish. And what did it all come down to? Thor: "My most memorable experience with the car was starting up the motor for the first time ... with open exhaust." Amen.