Contradiction In Terms? No, Arguably The Slickest Pro Touring Car Built Yet. 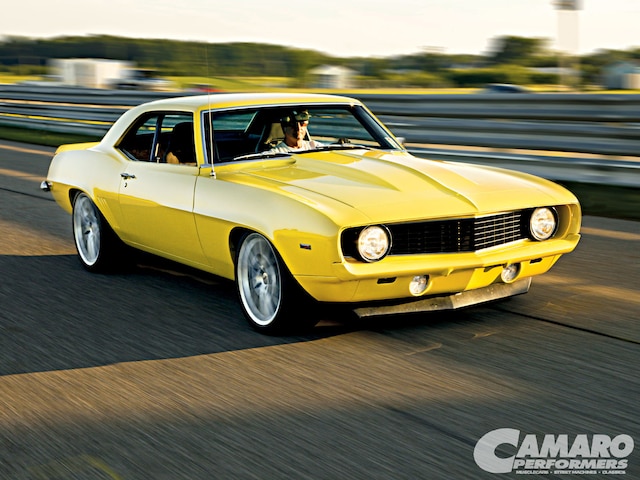 When you put car crazies Mark Stielow and Charley Lillard together the result is mayhem, albeit measured and designed to work as the situation warrants, but mayhem nonetheless. We're talking about a mountain of torque and power certainly, but we're also in the thick of a rigid chassis, precise and adjustable handling characteristics, huge brakes, and a killer wheel/tire combination that can handle the maelstrom with aplomb. Mark (whose day job is being a top-notch development driver at GM) used CAD/CAM, 2-D dimension drawing, and his own finely cultivated savvy to engineer the finest-driving Pro Touring car the world has yet witnessed. So of course, Charley calls it Jackass.

Charley is an affable middle-aged kid with a parts and information underground to rival the CIA and a seemingly bottomless pit of cash the size of the Grand Canyon. He's acquired a few of Mark's former "test" cars, including the infamous Mule. Charley also has a penchant for all domestic marques (from early Mustangs to traditional-looking street rods with all-aluminum big-inch big-blocks) as well as the decidedly insane.

His most bizarre bone crusher has to be the Pro Street-esque 1,650 ci Rolls-Royce Merlin aircraft engine masquerading as a '55 Bel Air (twin, rear-fender mounted machine guns included). Editor Nick has heard it: "The thing is almost as loud as an alcohol Funny Car. Hearing an airplane and looking at a car is a freaky sensation." But Charley likes to regularly shock the sh*t out of the troops with tremendously capable power whirling within a fairly demure package, but this mega-cube monster is about as retiring as a T-Rex.

But we're here to discuss the latest charger bumping in Charley's stalls. This Charley original was executed by Mark, who admits that the Mule was a bumptious dude, not really refined for the street, simply because it was used for so many different qualifiers. Jackass has all the mannerly aspects you'd expect in a truly lovable road car, but one capable of merciless behavior: quiet idle, supple suspension, full interior with nothing where it shouldn't be, and air-conditioned comfort. It took Reiters Metalcraft in Mt. Clemens, Michigan, and Joe Borshcke from Stenod Performance in Troy, Michigan, and a few more key agents nearly two years to build and fit the parts, like the final product sprang intact straight from some cosmic pod.

The driving end of the Terror Yellow Camaro was designed around a DSE QUADRAlink. Reiters positioned the sub-assembly and welded in the new body-strengthening bar/upper attachment points for the coilovers, as well as pass-through openings for the exhaust system. The back wheels are 20x12 ZR1, so deeper, taller tubs, also from DSE, easily accommodate the zero wheel offset and the 335/25 tires. Between the quarter panels is a Currie aluminum-center axle a very appropriate choice for the occasion.

Supposedly the first hot rod to be motivated by a ZR1 crate engine, it is the most powerful production engine ever available from any domestic manufacturer. In the Corvette, its rating is 638 hp at 6,500 rpm and 604 lb-ft at 3,800 rpm. With calibration tweaks by Thomson Automotive down in Wixom, Michigan (and later a Ryan Kuhlenbeck-modified LS7 crate motor controller that was amended in the running car by Matt Harlan at DiabloSport), the power level grew like freakin' Jack and the Beanstalk. With no mechanical changes or modifications, it produced 703 hp at 6,300 rpm? Yikes! You'll also notice how the whole package fits neatly under the ZL2 hood, not a lump or a hint or a whisper of what terror lies just beneath the surface.

That slick Currie axle measures 56.9 inches in width, carries 3.89:1 gears, and is connected to the Viper T56 via a Cameron Coves Industries 3.5-inch steel driveshaft. D&D Transmission over in Wixom made an adapter from 0.890-inch aluminum to hook it up with the engine. The flywheel and clutch assembly are straight out the ZR1.

Fuel and other critical fluids and their coolers abound. To fit the Rick's stainless cell and clear the 3-inch stainless exhaust system, the front corners were cut off. The fuel cell carries baffles designed by Mark, and a CTS-V fuel sender that Kinsler Fuel Injection joined with a pair of high-flow fuel pumps and corresponding regulators. Since Charley loves to terrorize (even him) on track days, the transmission is fitted with an external cooling system designed by Mark, composed of a pump and a compact heat exchanger connected by braided-steel lines.

Likewise, the fluid in the Currie axle benefits from yet another cooling system with a trunk-mounted catch can. There's more at the front of the car. To maximize airflow to the radiator, A/C condenser, and heat exchangers required for the supercharger and the power steering, Mark used a Bottomfeeder.com (air dam) kit that redirects air that would normally flow beneath the car directly to the regions that need it most. It sits rearward of the normal location and also aids in aero flow.

If Mark insists on one thing, it is how the undersides of his project cars are packaged. Everything is up and out of the airstream, yet with optimum functionality and free of vibrations. The exhaust system is one such realm. The fuel tank was built to accommodate it and the floor where the rear seat once was (now a storage department for Charley's pounds of $50s) has been raised for the same purpose.

Joe Borchke turned a pile of Kook's stainless tubing into the exhaust system's essentials: the headers for which we have no measurements and the 3-inch stuff into a floor-hugging system. Joe positioned the short Borla mufflers as far to the rear as possible and brought the ends of the tailpipes even with the valance panel. But before Reiters took the car back for bodywork and the application of its PPG Daytona Yellow paint (OE code 76 color in '69), Joe welded in an 8-point cage.

Charley scopes the recent past from an inside rearview mirror, featuring interior lights as well as a compass and depresses Solstice pedal pads annealed to the stock levers. Though there's enough torque on tap to totter smartly around in Fifth gear, Charley's always ready for some flash with his hand ready to flick the D&D shifter one way or the other.

So if you're looking to tatter somebody's shorts and you spot Charley in the mood for a little jive, remember that you might get your ass jacked.