The Ingredients Are Quite Simple-Make It Low And Make It Go. 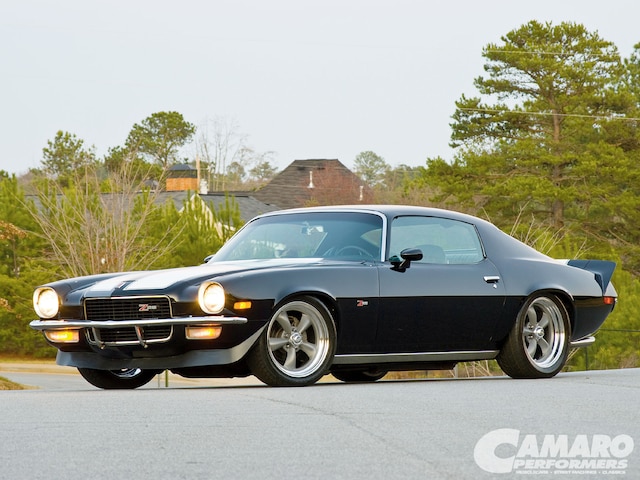 For Jeff Houston, the Chevy Camaro is the ultimate muscle car; and while he loves the ever-popular '69 model year, the second-generation cars are quickly catching up. So far, he's owned a few '70-73 Camaros, but he ran across a deal at the Turkey Run in Daytona Beach, Florida, that he couldn't pass up. Jeff dragged the car back to his Duluth, Georgia, residence. With the car up and running, he started picking away at the details. It didn't quite meet his approval for a cool muscle car, so he made a few changes and hit the road.

Now the car is ready for quick blasts to the local cruise-in or even long trips, and Jeff is certainly happy with the final product. Having bought the car in November of 2008, he had the car exactly how he wanted it by February of 2009. It was a quick and simple transition that took only three months, but it made a world of difference in this '71. Lots of detail work gave the car a tasteful look, while the primary eye appeal comes from the wicked stance and appropriately sized wheels and tires, but let's not forget about a slick coating of black paint.

Jeff started the process by calling Dale Etheredge Auto & Performance in Covington, Georgia. They discussed a plan to convert this Camaro from an ordinary driver to an eye-catching street machine. Knowing the goal was to make simple and effective changes to the Camaro, Dale started by installing a pair of Competition Engineering subframe connectors. This stiffened the unibody structure, allowing Jeff to autocross the car, or make a pass down the local dragstrip without the risk of chassis flex. Knowing that a car's stance is one of the key ingredients, Jeff ordered a pair of QA1 coilovers and tweaked them until the stance was just right. Out back, he kept the original leaf spring setup and simply slid a pair of lowering blocks into place to get the desired ride height.

Jeff relies on stock discs and drums for stopping power, but he rebuilt the braking system before taking the Camaro on its first trip around the block.

Rolling stock consists of 18-inch American Racing CL205 wheels wrapped in Nitto rubber, all of which fit perfectly within the wheel openings. The gray spokes make for a sinister appearance against the deep, black paint and offer a nice mix of contemporary and traditional styling. The original rearend still rides out back, but it's fit with an Auburn differential and 3.73 gears, so it's far from stock, and the rear sway bar helps keep the car level in the corners. Even with all these changes, the most effective addition to the Camaro was the third-generation (IROC) steering box. "While going down the road with the stock steering box, the car used to be somewhat unpredictable," says Jeff. "But with this steering box, there's no surprises and the car handles great."

During the Camaro's stay at Dale Etheredge Auto & Performance, it received a few updates under the hood as well. An overbore of 0.030 inch took the 400 small-block to 406 ci and cleaned up all prior scars and scrapes before the Wiseco flattop pistons were installed. Aside from the forged slugs, the bottom end is fairly mild, but Jeff kept it simple and affordable. Wanting an aggressive idle without positioning the engine's powerband out of comfortable reach, Jeff had Johnny Demos Racing grind a custom camshaft with 234 degrees of duration and 0.425 inch of lift. The Camaro offers a nice rumble through a set of ceramic-coated Hedman hedders and a box-stock Flowmaster American Thunder exhaust system. The stock cylinder heads sport a set of Harland Sharp roller rockers and Cal Custom valve covers while an Edelbrock Performer RPM intake manifold and a trusty 750cfm Holley double-pumper draw the perfect mixture of fuel and air.

Bolted to the small-block's crankshaft is a lightweight flywheel, which hooks up to a stock-style clutch set and sends torque through the Muncie M20 four-speed manual transmission. A classic Hurst Competition Plus shifter pokes through the console which provides the "old car" feeling, especially compared to Jeff's C6 Corvette of the same color. As most enthusiasts know, black shows every flaw, no matter the size, but Bryan Barnes of Barnes Restoration worked hard to straighten the panels to perfection before it was time to paint.

Bryan applied a few coats of DuPont ChromaPremier, Tuxedo Black basecoat before lining out the stripes and laying down the Dover White paint. After blasting on several coats of clear, he allowed the fresh materials to cure before the color sanding and buffing process began. The finished Camaro shows great attention to detail, but that doesn't exclude the brand-new interior. Using reproduction parts from Camaro Specialty, Jeff restored the interior back to its original condition. He kept it completely stock, down to the original AM radio, which by the way still cranks out the tunes. You won't find any fancy gauges or luxuries inside this Camaro-this car is all about smooth transitions and simple styling.

Proving that a car's personality can be appealing to all enthusiasts without a complete, ground-up restoration, Jeff Houston built a wicked '71 Camaro in a matter of months. And while it won't break any records on the autocross course or the dragstrip, the car looks awesome and offers a great muscle car experience even from the passenger seat. For now, Jeff is pleased with the results, but word on the street is that he recently acquired a Chevelle, so we'll see where the new project takes him. Jeff definitely has a keen eye for details and he knows how to make a car look good. This Camaro proves it.