Mike Michaelian Upgraded His ’71 Camaro With Modern Technology, While Being Careful Not To Disturb The Classic Camaro Spirit Wit 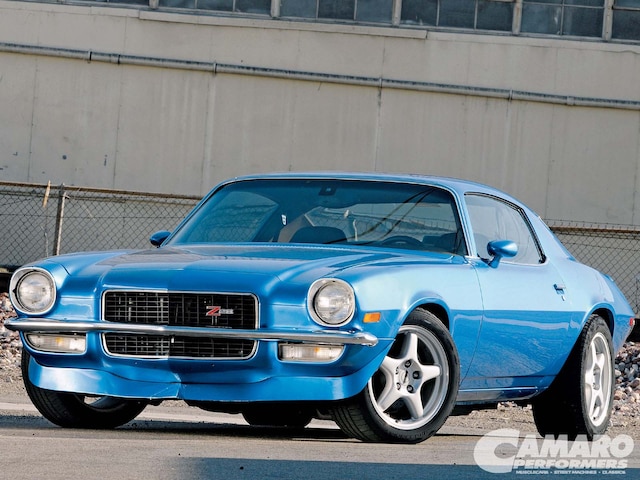 The passing of time is always kind to the recollection of good memories. This maxim is especially relevant when it applies to forty-year-old muscle cars. Raw power and a pure motoring experience make for pleasant recollections. Drum brakes and agricultural handling are memories best well and truly forgotten. Mike Michaelian of Los Angeles has plenty of good memories when it comes to Camaros. As far as ’71 Camaros go, Mike’s recall is razor sharp. His own ’71 Z28 has been a part of his life since his father brought it home brand new in 1971. Mike fondly remembers the impressions of what made the Chevrolet great when it was new, but has brought the second-generation Camaro into his own generation with genuine GM modern technology.

While the Camaro itself has been around for 38 years, upgrades over the course of the last twenty have brought the Camaro into a state where 1971 and 2001 are joined in a vortex of modern performance and classic style. What started with a 700R4 overdrive transmission swap to squeeze a few more miles per gallon out of the car while on a college student’s budget, has evolved into a fuel injected, reliable performer. Mike’s second-gen stands as the culmination of steady and methodical improvements by way of modern Chevrolet engineering without taking away too much of the original spirit of Camaro along with modernity. Mike’s day job as an aerospace engineer helped guide his decisions, but the passion for the original ethos of a ‘71 Sport Coupe was always part of his plan.

The buildup may have begun with a transmission upgrade, but things really got moving after graduation when Mike found the rare combination of both money and time required to take the car to the next level. The first stage in stepping up the horsepower came into the engine bay as a ZZ4 crate engine with a wrecking yard GM TPI system modified for improved induction. The engineering worked well enough, but the stock TPI was ultimately too wheezy for the ZZ4. Mike turned to TPI Specialties for help. A Miniram intake, a set of AFR 180cc street heads, and a Comp 262 hydraulic roller came later and the ZZ4 was singing as it should. Mike estimates the output to be in the 400 ponies and 400 twist range with no more wheezing at the hit.

Taking the stock suspension and brake package into the modern age starts out front with a set of Hotchkis springs that drop the car a just-enough 1.5 inches to help the stock rear springs give the car a nice rake. Edelbrock IAS dampers work with uprated front and rear stabilizer bars to move the ‘71 Camaro’s handling into the future. Baer 13-inch front and 12-inch rear disc brakes scrub off velocity with no surprises. The genuine GM LT4 five-spoke wheels run an inch wider out back and are shod with Z-rated BFGoodrich shoes for extra grip and good road-touring manners. A set of Southside Machine subframe connectors tie it all together out of sight.

A large part of any automotive memory bank from 1971 involves being inside the comforting vinyl of the interior. Mike made sure to keep enough of the original Camaro inside alive with GM classic goods while adding some of the new to improve on the original experience. A MOMO leather-clad steering wheel and a set of Arizen Racing seats add precise control and bolstered comfort to the cabin. Sound deadening out of sight makes for quiet running on the long hauls. Keeping an accurate eye on key measures is a full arsenal of Autometer gauges. And even though the bulk of the install is under the hood, a Classic Air Perfect Fit series A/C system pipes in plenty of cool air for driving in the endless summer that is Los Angeles.

With the troublesome pieces of the ‘71 relegated to the parts bin of history, Mike has succeeded in taking this classic Camaro into the next generation without leaving the past too far behind. Even though the original rumbling turbo mufflers have long since been replaced by new versions, the initial memories live on with more to be made.

•Find Mike and others afflicted by second-gen Camaros over at NastyZ28.com.