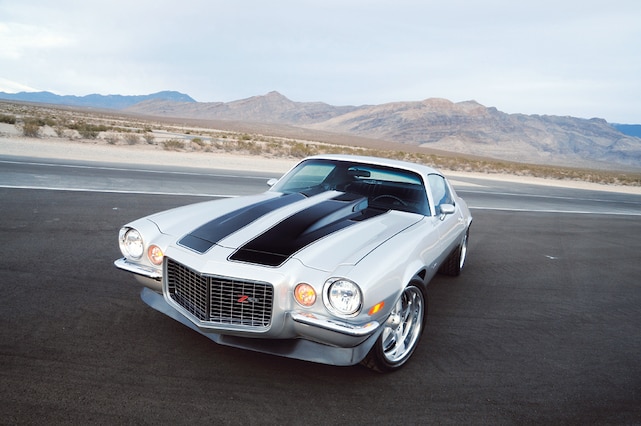 We all share some sort of connection with the Camaro. Historically, it’s GM’s golden child and arguably America’s favorite muscle car. It’s a safe bet you have some sort of affinity for the ride or you wouldn’t be holding this Camaro-dedicated publication in your hot little hands. Your relationship may have begun in 1967—the year we were all introduced to the Camaro, or it’s possible you’ve yet to begin your kinship, as you “patiently” await delivery of your 2010 SS.

It took almost 30 years for Rick Love, owner of this slick, silver metallic second-gen, to finally get his hands on an F-body. He remembers similar rides taking up residence in his high school’s parking lot. “There were a few guys in school that drove second-gen’s, and I really liked the look of that body style,” Recalls Rick. “At the time I didn’t have enough money to get one, but man, I thought they were just too cool.”


In mid-2007 Rick caught a healthy dose of Camaro-itis when Stacy Tucker offered him a stint behind the wheel of her ’69 for a few laps around an autocross course at one of the Goodguys car shows. Those “few” laps turned into a long day of giving Stacy’s hot rod an extended workout, and Rick a fistful of blisters and a renewed interest in getting a Camaro of his own.

“Fortunately I had just sold another car I had been working on and had a few dollars in my pocket, so the hunt for a Camaro began,” quips Rick. “It took almost two years, but this one came up through a mutual friend. I wanted something clean and in good working condition that I could drive right away and start upgrading the suspension. This car had the rust-free body and good paint. It was just what I was looking for, plus it was already decked out with a six-speed.”


Working full-time at Vintage Air in San Antonio, Texas for over 10 years, Rick is no stranger to classic hot rods. He’s built a few of his own over the past 25 years, but credits, or blames, depending how you look at it, Kyle and Stacy Tucker of Detroit Speed and Engineering for re-kindling his interest in Camaros. “I’ve driven my ‘39 Ford over 140,000 miles during the last twenty or so years, including The Hot Rod Power Tour and Street Rodder magazine’s Road Tour, but when Stacy let me drive her ’69 Camaro, I was blown away at how great the car felt and handled; not only on the autocross course, but it had excellent street manners as well. I was hooked!”

With Vintage Air’s aggressively expanding line of performance products, it only made sense to have an early Camaro on hand for research and development,” explained Rick, “We drive our cars a lot and run them pretty hard, so having this second-gen around really helps with parts development.”


Well, that’s nice gesture and we’re sure Vintage Air’s owner, and fellow hot rodder, Jack Chisenhall is very supportive, but let’s get real; Rick built the car to beat up on and whip around various autocross and road courses. To prove that point, he ditched most of the stock suspension components for some upgraded hardware. With the help of Kyle Tucker, Rick installed Detroit Speed’s tubular control arms up front, stiffened up the rear with their performance-engineered leaf springs, and added Bilstein shocks all around. If you’re gonna run hard, you’ll be needin’ to stop hard, so Rick outfitted the car with a set of six-piston Wilwood stoppers riding on 12-inch rotors up front and four piston binders out back. Not only do the Wilwoods look good, they get the job done. He also relies on BFGoodrich KDW Radials to put the power and stopping force to the ground.

A relatively modest 350 resides under the hood playing host to a Comp roller cam and Edelbrock aluminum heads. A Holley 750 tops off the Edelbrock Performer RPM intake while a Be Cool four-row aluminum radiator keeps engine temps in check. Function and form co-exist nicely with a polished Vintage Air Front Runner Drive System setting the stylish tone with a Tuff Stuff 140-amp alternator, and Vintage Air Gen IV Sure Fit A/C System. The ongoing theme continues with a set of polished aluminum GM valve covers and an All Star Racing air cleaner housing.

With a 420hp rating at the crank, the hefty Borg-Warner six-speed transmission allows the F-body to reap the benefits of running 3.90 cogs in a Moser 9-inch rear end: smooth cruising on long-term highway drives that also work great on an autocross. Did we mention Rick likes to autocross this car?

Rick enlisted the co-op of Hedman Hedders and Flowmaster mufflers to make quick exit of spent fuel. “I like an aggressive-sounding ride, but not so obnoxious to overpower my Kenwood sound system,” informs Rick. “Even though this car gets driven on a regular basis, I don’t run big subwoofers; just a simple Kicker ZX Amp with a pair of their KS four-inch speakers in the doors and a K65.2 component set in the package tray. They sound great!”


We get it Rick, excess weight, like a cumbersome speaker box, equals slower times on the autocross.


The interior theme echoes the pre-meditated visual aspects as the engine compartment: simple, yet tasty. Gabriel and Sons in San Marcos, Texas installed the Classic Industries GM-style door panels and upholstery while Year One was chosen to supply the carpet kit. It’s tried and true and it works.

A one-off custom set of Classic Instruments gauges supply a performance garnish in the custom instrument panel and are a nice compliment to the Hurst Competition Plus shifter and midnight black Corbeau GT seats upholstered in stock Camaro style. Once again Rick wisely went with a less-is-more approach to captains’ quarters.


It’s always a plus to have friends around to help with a build like this and I wouldn’t have been able to get the engine compartment and interior looking this good without the help of George Packard,” informs Rick. Add in the expertise of Tom Group working on the brake system and this classic muscle car possesses similar stopping prowess of a modern-day sports car.


We first saw Rick’s car as he was competing in the Optima Batteries Ultimate Streetcar Invitational at the Spring Mountain Motorsports Ranch in Pahrump, Nevada, so we witnessed first-hand how he shows this car no mercy.

Even though the car has only been on the road for a little over a year Rick has taken home the hardware for winning the participant class in the autocross at the 2008 Goodguys Lone Star Nationals, but the biggest surprise for Rick was having the car chosen as a Finalist for “Goodguy’s Muscle Machine of the Year.”


With a 420hp rating at the crank, the hefty Borg-Warner six-speed transmission allows the F-body to reap the benefits of running 3.90 cogs in a Moser 9-inch rear end: smooth cruising on long-term highway drives that also work great on an autocross. Did we mention Rick likes to autocross this car?