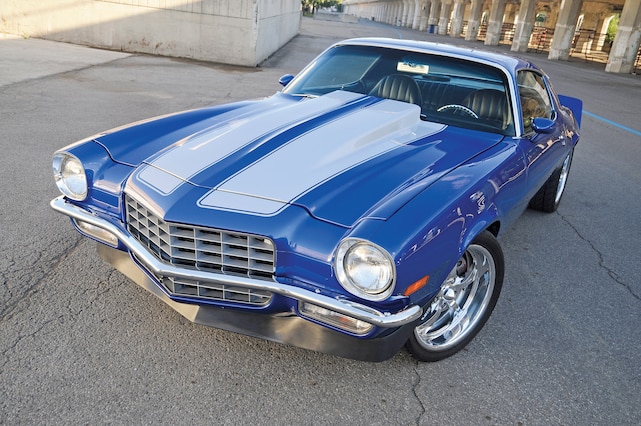 Okay, okay, slap our lips for the hazy Lebowski reference (as in the Coen brothers “The Big Lebowski,” circa ’98). Cody Lebo, 25, is the impetus for the title, but beyond that there is no other tie-in to the flick. This is the first car he’s ever built and maintained, and damned if he didn’t get the whole thing right the first time. Even he knows it.

There were portents from the beginning. “When I first got the car, I found service tags from a dealership in El Segundo, California. I thought it was pretty cool buying it in my hometown (Logansport, IN). What was originally my high school car has now become a strictly fair weather ride.”


Cody’s a union pipefitter (and married with no offspring as yet), so he’s bound to have a decent disposable income and the ability to blow it on whatever he pleases. Let this be a lesson Cody. Savor these childless days because when the stork arrives, your entire world will warp absolutely. “At the ’07 Good Guys, I won Mighty Muscle. I finally realized that all of the hard work and money was really worth it,” Cody said with more than a little pride. “I built the car from the ground up, except for the paint and the valve train.”


In ol’ Gray Baskerville’s parlance, Cody’s got a real nice “reacher,” a car that has all the basics down solid, looks super, and has plenty of room left for change…that could take several more years to finish completely. Isn’t that the heart of the hot rod credo, to ride and handle better, drive better, and/or look better than stock?

How many of you guys have experienced this story before, especially in your younger days? Cody was really out looking for a ’68-’70 Chevelle but everything he saw was “junk or more than he could afford at the time.” As the months rolled by, Cody got a case of the ants. He wanted something cool to drive and he would wait no longer. He kept passing this car on the side of the road, not really taking notice at first. But the thing sort of grew on him, so he stopped to make an inquiry. It was a ’72 “in decent shape, good enough to negotiate a price.” With a little nickel-and-diming, $3,500 changed hands and Cody was in business. Almost.

He relates this incident; perhaps you’ve experienced similar frustration. It concerns a local car painter. Arrrgh! “He said, ‘Bring it right over and I will get to it right away.’ I did. I went back a month later and discovered that he’d left the car uncovered outside. It was raining. It was rusty, as he’d stripped the car and left the metal unprotected. Obviously pissed, I gave the guy a piece of my mind and got the car out of there the same night. Two painters and two years later the car was finally painted. [Rick Dennis had applied the PPG ’95-’96 Corvette blue]. Although it seemed like forever, the wait was worth it.”


Cody figured right on the motor. It’s a 387 with an Eagle-forged stroker and Dart Iron Eagle castings fixed with 2.02-inch intakes and 1.50-inch exhaust valves. The compression ratio is a fairly friendly 10.5:1 as created by Diamond pistons and 72cc combustion chambers. Kercher Engines took the machining and assembly chores, entertaining a mild Bullet roller (260/270 duration at 0.050-inch, 0.370/0.385-inch lift), and put it to bed with a Crane Blue Race timing set. A Diamond stud kit centers the Comp Magnum rockers and pushrods. Cooling and lubrication comes from a Milodon 7-quart pan scavenged by a Moroso pump and a Perma-Cool oil cooler mounted forward of the Jeg’s aluminum radiator.

Induction, ignition, and exhaust are the pretty much standard equipment: MSD 6AL box (with rev-control) and ceramic-coated Hooker Super Comps with 1¾-inch primaries. The rest of the system is a 2½-inch diameter Flowmaster with Delta Flow muffs. A GM high-rise intake manifold centers the 750 cfm 4779 Holley that takes fuel from a companion blue pump. The accessory drive system, valve covers, air cleaner body, block-off plate, and hose clamps are all Billet Specialties products. Cody estimates an output of 456 hp at 6,300 and 420 lb-ft at 5,700 rpm, plenty of spice for the 3,500-pound Camaro.


On the driven end, a ’72 Turbo 400 running off a Coan converter with a 3,500 rpm stall speed. Cody had the original driveshaft balanced and popped on some heftier U-joints. Torque is ultimately dispersed by a 12-bolt fitted with 3.73:1 gears and limited-slip differential.

The drivetrain found a good home, too. Suspension changes are rudimentary, they are directly related to the Camaro’s ride, handling, and appearance and not particularly to a stone high-speed handler. The changeover included Hotchkis 2-inch drop springs (front), matched anti-sway bars (front and rear), 1-inch lowering blocks, and QA1 12-way adjustable shocks between the original control arms and at the rear axle and represents a great platform to build on.

Wheels and brakes are big enough to make difference, too. Baer 13-inch discs up front work with 12-inchers at the back. The rollers are optimum: 8x8 and 18x9.5 Billet Specialties soft-lip GTX rims. By carefully choosing width and backspacing (4.5- and 5 3/8-inch) Cody was able to horn in the 265/35 and 295/35 BFG g-Force KD rubber without wheel well surgery.

Aha! Here’s another place that our young driver could spend some time and a few more bucks. Save for the trimmings, the interior is basically stock but with repro materials in place of the original rags. The dusky “hole” is illuminated by a Hurst ratchet shifter, a trio of Auto Meters depending from the dash, a Billet Specialties steering wheel, and some bright bits on the doors. Cody likes getting his brains blown out by the Kenwood head and amp, and the Polk Audio 5-inch and 9½-inch speakers that are sub-woofered by foot-wide JC unit. How about a little cool air on the side, Cody?

One of the questions on the tech sheet asks what the owner would do differently if he had it do over again. Cody: “…the compliments that I get when I drive it are priceless. I would not change a thing.” Should we take young Lebo at his word? He told us that all he wanted to do at first was put the Camaro in some nice paint and just drive it, but that one thing led to another. Uh-huh. His sano ‘72 could use more suspension, an overdriven top gear, and maybe a skoosh more spank for the motor. Think he can resist? We don’t, either.


Then, the last line of the car’s background description we’d somehow overlooked. “I’m still having thoughts of suspension and interior upgrades in the near future.” Yup, Lebo-Ski, we’re sure you’ll be giving this proposition lots more thought. Or maybe you should be hanging out at bowling-alley bars instead.